You are here: Home / Blog / Great Escapes: Aztec Ruins National Monument
This post may contain affiliate links or mention our own products, please check out our disclosure policy here.

Contrary to the name, the Aztecs of central Mexico did not create the stone dwellings you’ll find at Aztec Ruins National Monument. These structures along the Animas River in New Mexico were actually first built around A.D. 1100 by the Ancestral Puebloans. These ancient Indians built several multi-story buildings called “great houses,” and associated with each great house was a “great kiva”—a large circular chamber used for ceremonies. To explore this well-preserved Ancestral Pueblo town, follow the self-guiding trail just outside the park’s visitor center. Aztec Ruins is also a UNESCO World Heritage site, and since there are only 21 such unique sites in the United States, so you know this place is special. 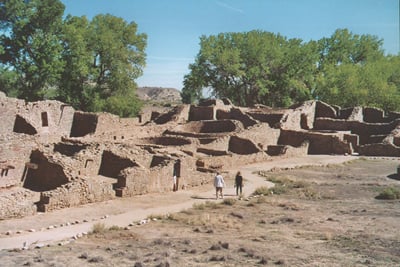 Built around an open plaza, some of the stone walls of the West Ruin are over 30 feet high, and once contained between 450 and 500 rooms. In places, the walls are three feet thick.  Ancient masons used the “core and veneer” style, laying a thick rubble core within a finely shaped stone veneer. Several rooms still have parts of their original roofs that were made from pine, spruce, and aspen hauled here from mountains located at least 20 miles away. Large deposits of artifacts have been excavated from the West Ruin, including bone and wood tools, remnants of food, clothing, jewelry, and pottery. These discarded items helped archeologists learn about the lives of the early inhabitants. 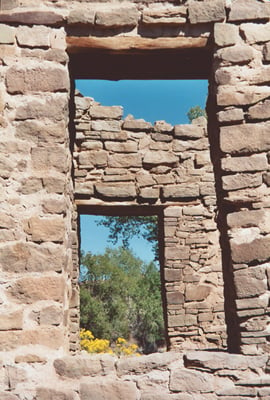 Archeological evidence shows that people lived at Aztec for almost 200 years. In the late 1200s, however, the area became deserted. No one knows for sure what caused the Ancestral Puebloans to migrate elsewhere, but it is thought that perhaps a drought forced inhabitants throughout the region to migrate southward. As you stroll through these monumental ruins, listen carefully. You can almost hear an ancient drum beat… or is that just the wind?!

Directions: Located in the Animas Valley of Northwest New Mexico, about 75 miles east of Four Corners, Aztec Ruins National Monument is on Ruins Road, approximately 1 mile north of US Hwy 550 (County Road 2900) on the north edge of the city of Aztec. Ruins Road is the first street west of the Animas River bridge on Hwy 550 in Aztec.