You are here: Home / Blog / RV Travel Tales: A Blow-Out in Alaska Makes For a Long Night
This post may contain affiliate links or mention our own products, please check out our disclosure policy here. 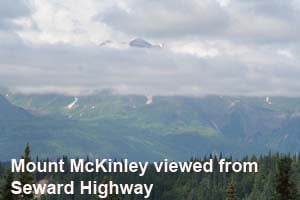 On a late July evening, a blow-out on the left inside rear tire of our motorhome sidelined us to a scenic pull-out on the Seward Highway about 35 miles south of Anchorage. Thank goodness, the tire blew at that particular spot! We had had a wonderful day on a boat tour of Prince William Sound, jokingly calling the day Alaska’s summer!  We had slogged through rain and mud as we spent previous days on the Kenai Peninsula, especially at Seward.  When the tire blew, we were headed into Anchorage to regroup and pick up some supplies.

After parking in the pull-out next to some backwater from Cook’s Inlet, we made the initial call to our road service about 7:30 p.m. The dispatcher took our information, asked if we were safe, and then said, “Help is on the way.” Next, we received a call that service would arrive in two hours. Since nighttime and daytime, for the most part in July, are the same in Alaska, there was no problem in waiting for two hours. Lee got busy getting our spare out from a compartment in the rear of the motorhome. Before the two hour timeline, we received another call saying a different service would arrive in four hours. 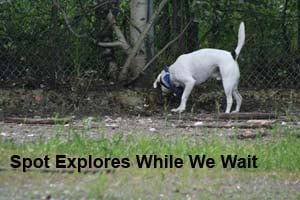 Cars, trucks, and RVs of all types whizzed by on the busy Seward Highway. While we were in a safe pull-out, we did not feel comfortable to sleep, lest we not be awake when the service truck arrived. Besides, the new spare tire was propped against the side of the motorhome, begging for theft. Sometime before midnight, which had become like twilight to the lower 48 states, we received another call stating that the man who was supposed to make our service call did not show up for work and could not be there until 7:00 a.m. the following morning. Again, Lee called our road service and asked if they could get someone else. After all, we were only 35 miles out of Anchorage. How difficult could it be to get service?

Shortly afterward, we received a call confirming that another service would arrive at 3:00 a.m. With our clothes on, we took turns dozing with one eye on our spare tire in a very visual spot outside. That service showed up with a flatbed trailer for towing. The serviceman had been dispatched to look for a white automobile parked on the side of the road. After Lee talked to the owner of that company, he stated that a mistake had been made in the dispatch. However, he said we would not find anyone to come out and change a flat tire. Lee again called our road service and eventually, took a confirmation that someone would arrive from Sterling, Alaska, at 7:00 a.m.  We had just come through Sterling two days prior, a small town on the Kenai Peninsula 100 miles away. We were one-third that distance from Anchorage, the largest city in Alaska.  Surely, there was a service in that city that would change a flat tire.  When no one arrived by 7:30 a.m. the following morning, I was back on the phone to our road service. Finally, at 9:00 a.m. a service truck from Sterling showed up, and in 20 minutes changed our tire. In short order, we were on our way to Anchorage, weary and bleary-eyed from a 14-hour ordeal, but glad to be traveling again.

I commend the service at Sterling and the dispatcher, who called us several times to see if our work was being completed and to apologize for the delay. However, we had questions for our road service. Why does the company go so far to get service companies?  Surely, there was a service in Anchorage that would change a flat tire.  We had had a similar situation in our home state of Arkansas about a year prior. We needed service in Marshall, only about 50 miles from Harrison, a larger city in Arkansas.  Our road service sent someone from Carlisle, Arkansas, at least 150 miles south of our location.  It took four hours for the service man to arrive.  Surely, there is a more efficient system.