You are here: Home / Blog / The 19th Hole: Golf Instructor Jim Flick Dies at 82
This post may contain affiliate links or mention our own products, please check out our disclosure policy here. 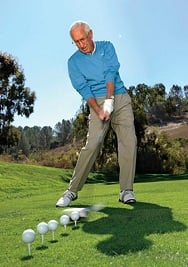 You get the essence of who Jim was, and the impact he made on the game of golf by looking at a message he wrote on his web site recently: “After teaching the game of golf for more than 50 years, the time has come for me to step away from the lesson tee. My life as an instructor has given me more than I ever dared imagine when I took my first swing at a golf ball as a boy in Bedford, Indiana. Golf has taken me all over the world and introduced me to so many wonderful and remarkable people. I’ve been privileged to work with and associate with some of the game’s greatest players, though I’ve gotten as much satisfaction helping an amateur straighten his or her slice. I urge you to always be open to the life lessons the game has to offer. I guarantee that they’ll make you a smarter, more successful and more contented person.”

Over the years, Jim taught golf in 23 countries and directed programs such as Golf Digest’s Schools and ESPN Golf Schools. He also served as director of golf instruction at Desert Mountain in Scottsdale, Ariz. for 20 years. He also shared his knowledge of the game by writing five books, the most recent “Jack Nicklaus, Simply the Best.”

Jim received numerous accolades, including Golf World’s designation as one of the top 10 golf teachers of the 20th century, being named PGA Teacher of the Year in 1998, as well as being inducted into the World Golf Teachers Hall of Fame and the Southern Ohio PGA Hall of Fame in 2002.

Jim recently said, “Although golf is a game of infinite subtlety and possibility, always remember that the door that leads to its inner secrets and rewards is marked fun.”

Jim Flick is survived by his wife, Geri, and five children.