You are here: Home / Blog / Great Escapes: Eureka, Nevada
This post may contain affiliate links or mention our own products, please check out our disclosure policy here. 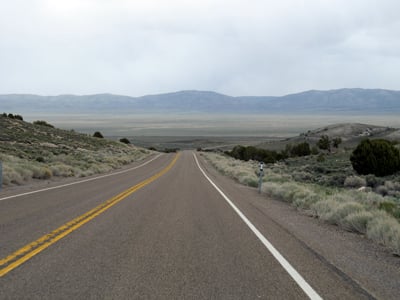 In July 1986, Life magazine described Nevada’s U.S. Highway 50 between Ely and Fernley as the “Loneliest Road in America.” At the same time, AAA representatives warned travelers to avoid this empty 287-mile stretch unless they were “confident of their survival skills.”  Much has changed in the last 25 years. The scenery is still wide open, there’s not a lot of traffic, but it’s far from lacking in amenities. This scenic corridor retraces the route of the Pony Express and Overland Stagecoach trails, connects you to plenty of recreational opportunities, and passes through five full-service communities. Eureka is one such stop along the route, and is one of the best-preserved 19th century mining towns in the state.

Lead and silver ore was first discovered in Eureka during the fall of 1864, but processing the bi-metallic ore posed such a challenge that it wasn’t until smelters were perfected and constructed several years later that mining boomed. Eureka then became a major producer of pig-lead from 1869 to 1879. At its peak, $40 million in silver, $20 million in gold and 225,000 pounds of lead were produced here. The 16 smelters around town certainly didn’t improve air quality, but perhaps it was the 100 saloons that helped the nearly 10,000 residents forget about the pollution! Because of the town’s central location in the state, it became a railhead for the whole area, which kept Eureka alive even after production decreased.

The best way to see dozens of historic buildings and sites in downtown Eureka is to pick up a self-guided walking tour map at the Sentinel Museum, then spend a couple of hours or all day stepping back in time. The streets are long and wide, so it’s easy to park your rig and whatever you might be towing. A few highlights include: 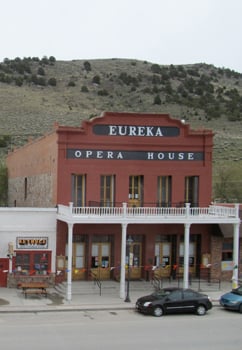 Eureka Opera House, built 1879, has been fully restored and now serves as a convention center and auditorium. Elegant features such as a chandelier, curtain, wood floors and horseshoe balcony (one of only three horseshoe-shaped balconies in Nevada) have been preserved. Historic graffiti has been preserved back stage from the early days, and the tradition has been continued with signatures of the people who have performed at the Eureka Opera House since it was reopened.

The 1877 Jackson House next door to the Opera House has been beautifully restored and has nine Victorian bedrooms upstairs, and a bar and restaurant downstairs. 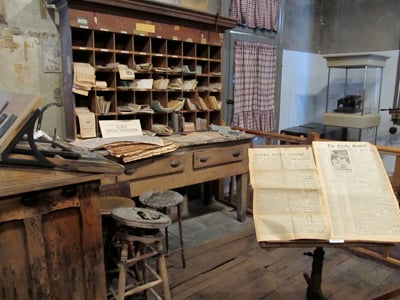 The brick Eureka Sentinel Newspaper Building dates from 1879 and now houses a museum. This structure was used as the newspaper office and residence until 1960, and was made into a county historical museum in 1982. The downstairs press room, shown above, features all original equipment on which the Sentinel was printed in the boom days of Eureka. Old copies of the Sentinel are tacked on the walls. In the mining history room upstairs you will see tools from the early days of mining, as well as historic stock certificates, ledgers and personal miners items. Lifestyle artifacts from the early days of Eureka are there, too, including items from schools, homes, and businesses.