You are here: Home / Top Stories / A Celebration of Native American Culture
This post may contain affiliate links or mention our own products, please check out our disclosure policy here.

Cruising through the Southwest in an air-conditioned RV with all its modern conveniences brings to mind the hardships endured by sturdy pioneers who slowly navigated across this arid land in covered wagons more than a century ago. What may not occur to us, however, is that long before the pioneers came along, this was the home of vibrant prehistoric communities that learned to survive in such a harsh environment by coexisting in harmony with nature.

The story of these communities and the enduring Native American culture is told at the Heard Museum in Phoenix. The museum’s collection of artifacts and stories celebrates Arizona’s 21 tribal communities, and tribes in the Southwest, Mexico, South America and Pacific Coast islands.

Heard Museum founders Dwight and Marie Bartlett moved to Phoenix from Chicago in 1895 to enjoy a drier climate, just like many Phoenicians today. Their extensive travels throughout the Southwest led them to collect Native American artifacts, which they exhibited in their 6,000-square-foot hacienda, “Casa Blanca.” Eventually the collection became so large that they added a museum to their property. The museum opened just months after Dwight Bartlett’s untimely death in 1929. Marie’s wish to share the collection resulted in visitors ringing Casa Blanca’s doorbell for a museum tour that she gladly accommodated. Upon Marie’s passing in 1951, the museum’s trustees hired staff and created a volunteer Museum Guild to continue operations. And, as they say, the rest is history.

The museum is internationally recognized and locally appreciated not only for its collections, special events, markets and festivals, but also for its beautiful Spanish colonial-revival hacienda architecture with graceful arches built around a courtyard shaded by ironwood trees and cooled by waterways. Arizona Republic readers consistently vote it a Top 10 Arizona destination.

The Heard utilizes artifacts, multimedia exhibits and storytelling to describe Native American culture. Its eleven galleries and 40,000 artifacts expand Arizona’s colorful history well beyond the OK Corral and John Wayne movies. In fact, according to Dr. Letitia Chambers, president and CEO of the Heard Museum, “Storytelling is something that distinguishes the Heard from many other museums. We try to tell a story beyond just having an object.”

The exhibits seek a balance between history and both contemporary and traditional art.  “We consider it important to not only show the history of Indian peoples and the cultures as they were fifty or even a thousand years ago,” said Dr. Chambers, “but that these are living dynamic cultures with a vibrant art scene today.”

The Heard’s exhibits are not just for adults. The Heard’s family-friendly displays “We Are! Arizona’s First Peoples” and “Every Picture Tells A Story” have lots of hands-on activities for kids, including making burden baskets, flowers and cloth dolls.  Interactive audio and visual displays and story readings ensure that the little ones enjoy their visits.

Museum visitors often see bead workers or other artisans working in the galleries. During events such as Holidays at the Heard, artists at work welcome questions about both contemporary and ancient creative practices.  Films, guest speakers, festivals, family events and community gatherings make for a lively and enlightening atmosphere celebrating the vitality of Native American cultures. And the Heard’s enthusiastic docents, who take a nine-month course on American Indian cultures and art, are thoroughly knowledgeable and entertaining tour guides.

Two annual events are perennial favorites. The Heard Museum World Championship Hoop Dance Contest, scheduled on February 11 and 12, is a whirlwind extravaganza where costumed dancers from age two to eighty execute a dance dramatically joining pure athleticism with creative artistry. Each brilliantly costumed dancer manipulates as many as fifty colorful hoops to create a variety of brilliant designs that include animals, birds, butterflies and globes.

The Heard Museum Guild Indian Fair & Market, which will be held March 3 and 4, is Arizona’s largest annual Indian market featuring over 700 artists selling works, including paintings, baskets, pottery, couture and jewelry priced for every budget.  The 20,000 attendees also enjoy music and dance performances and appetizing food. It’s a great chance to meet the artists and learn the story behind the prized pieces you may bring home to share with family and friends. It also ensures that you are buying authentic Native American art.

The heart of any museum, of course, is its exhibits—both the four long-term exhibits and its seven rotating exhibits that change at least annually, ranging from centuries-old drawings and pottery to contemporary ceramics, sculptures, paintings and photography.

“When you enter the museum, the first gallery you come to has just a few exhibits in it, but,” Dr. Chambers emphasizes,  “it says a lot about what we are about. You will see in the same case a thousand-year-old piece of pottery displayed next to pottery fifty years old. It shows the continuity of the cultures and that is very important.  We are about the history and life ways of native peoples, but we are also very much about the art that native people produce today.  Connecting the past to the future really gives a richness and depth to the museum that helps make not just the artifacts and the art come alive, but you feel the spirit of the artist.”

Dr. Chambers recommends visiting the Home exhibit first to give you a better perspective on the other exhibits. The Home exhibit talks about the various geographical areas in Arizona and New Mexico and then shows some of the utilitarian items and fine art from those tribal areas. “I think it is a very significant exhibit to orient yourself because it gives you a feel for the people and the land where they have lived for ten thousand years and possibly longer.”

Within the Home exhibit, the always-popular 500 carved Hopi katsina dolls include the extensive collection donated by former Arizona Sen. Barry Goldwater. Each of these flamboyant and intricate wooden carvings represents the natural world or cosmos, from a revered ancestor to natural phenomena. 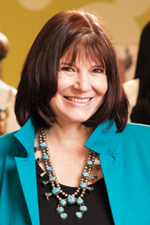 The Heard’s notable boarding school exhibit recounts the shameful story of the federal government’s harsh Indian boarding school movement—a time of abuse and desecration of native culture with the goal of wiping out native identities. Tens of thousands of children were forcibly separated from their families, immersed in European and American culture, had their appearances changed and were even forbidden to speak their native tongues.

The Heard Museum is appreciated by Native Americans. They often only know about their own tribes, Dr. Chambers said,  “so the museum is very enriching for them. They appreciate that artifacts and art have been preserved, handled with respect and exhibited in ways that are appropriate.”  Their story is being told.

Dr. Chambers hopes that visitors “come away with a greater appreciation for the culture of the Indian people—both the past and the present. We want visitors to come away with a greater understanding that we have more in common than you think in the relationships of people to people.  We want a better understanding of the commonality of the human condition.”

Kent R. Davies is a writer who lives in Phoenix, Arizona.

RV parking at the museum can be limited during peak times. Fortunately, the light rail system (602-253-5000 or metrolightrail.org) serves the Heard and offers eight park-and-ride lots, with the most RV-friendly lots being at Sycamore and Main streets, 19th Avenue and Camelback Road, 19th and Montebello avenues and in Tempe at the 101 (Price Freeway) at Apache Boulevard.

There is also a Heard Museum North at the Summit at Scottsdale. It includes two galleries, a sculpture garden, gift shop and café. For information, call (480) 488-9817 or visit heard.org/North.