You are here: Home / Top Stories / A Cowboy Success Story
This post may contain affiliate links or mention our own products, please check out our disclosure policy here.

In my Arkansas hometown during the 1940s and ’50s, cowboys galloped their famous steeds across the silver screen of our local movie theater every Saturday afternoon. Gene Autry, Roy Rogers and Hopalong Cassidy were the primary heroes, but around 1950, Rex Allen, with his boyish all-American good looks, came on the scene, starring in westerns produced by Republic Studios. Recently, we visited the Rex Allen Museum and Cowboy Hall of Fame in Willcox, Arizona. Rex Allen’s story began in this small desert town in the southeastern part of the state, and the museum fittingly houses the memorabilia of a hometown cowboy who became a recording artist and a movie and television star.

Allen’s parents lived on a ranch about 40 miles from Willcox when Rex, their second son, was born in 1920. The family moved closer to Willcox after Rex’s older brother died from a rattlesnake bite. His mother would never return to the ranch, and she died when Rex was only 7 years old.

His dad, Horace Allen, a self-taught fiddler, earned extra income playing at local dances. He taught Rex to play, and at age 13 bought him a Sears Roebuck guitar. At 14, Rex wrote “The Arizona Waltz,” the first of numerous songs he penned and recorded.

Rex sang in the church choir and high school glee club, but had no other training in music. However, one teacher encouraged him to try out for school plays. He received a small music scholarship to college, but his head turned toward the rodeo circuit.

His first big break came in 1938—the year he graduated from high school—when he was invited to sing at the Cattlemen’s Convention in Phoenix. He decided that his future looked brighter with a guitar in his hands than from atop a bucking bronco. He started on the radio in New Jersey as “Cactus Rex” and then performed in Chicago on the “National Barn Dance” on station WLS. In 1948, he signed with Mercury Records, where he recorded a number of successful country music albums. In 1952, he switched to the Decca label and continued to record into the 1970s. Many of his original songs were featured in 19 of his films from 1950 to 1954. Later in his career, he wrote songs for Disney productions.

On screen, Rex Allen personified the clean-cut, God-fearing American hero of the Wild West. He once said, “I didn’t want anyone to say I was copying Roy Rogers or Gene Autry, so I purposely looked for a horse that was different, that no cowboy had used. I turned my guns around backwards just to be distinctive.”

Like other good guys in westerns, Allen wore a white Stetson, loved his faithful horse, “Koko,” and had a loyal buddy who shared his adventures, first Buddy Ebsen and later Slim Pickens.

By the mid 1950s, interest in western movies had waned and Allen became the last of the silver screen cowboys.  He had a brief stint as Dr. Bill Baxter on a half-hour weekly television series called “Frontier Doctor,” which ran in 1958-59.

His deep, rich voice gave Allen a new career as a narrator on TV shows, commercials, and wildlife films and as the voice of 150 characters in Walt Disney productions. He was the voice of the father on Disney’s “Carousel of Progress,” which was presented at the 1964 New York World’s Fair, and is now an attraction at Disney World in Orlando, Florida. He narrated Hanna-Barbera’s animated  “Charlotte’s Web,” and was the voice in commercials for Purina Dog Chow, Tony Lama boots, Bailey hats, Fender guitars, and Ford trucks and tractors. He also wrote and sang the theme song for the early 1980s TV sitcom “Best of the West.” 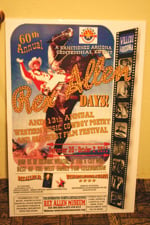 For his contribution to the motion picture industry, Allen was honored with a star on the Hollywood Walk of Fame. In 1983, he was inducted into the Western Performers Hall of Fame at the National Cowboy & Western Heritage Museum in Oklahoma City. He was among the first recipients of the Golden Boot Award honoring people who made western movies and television shows.

Allen toured every major rodeo in the United States and Canada with his horse Koko. When the horse died at age 28, he had him buried in the Railroad Park across from his museum in Willcox. A larger-than-life bronze statue of Rex Allen created by sculptor Buck McCain also stands in the small park. Inside the statue a molded bronze heart with arteries symbolizes that Rex Allen’s heart will always be in Willcox.

The museum is filled with movie posters, awards, and the glitzy cowboy clothes Allen wore in stage and rodeo appearances. The buggy from his television series, “Frontier Doctor,” stands in a prominent place. A television monitor plays a continuous loop of his western movies.

Rex Allen died in December 1999 in Tucson. At his request, his ashes were scattered at the base of his statue in Railroad Park, returning his dust to the desert dust of his home.

The first full weekend of every October, Willcox honors its hometown hero with Rex Allen Days. The event, now in its 62nd year, has grown from a parade and an appearance by Rex Allen, to feature a professional rodeo, as well as a kid’s rodeo, comedy shows, two softball tournaments, a car show, a carnival, festival food, shopping, crafts, and an appearance nowadays by Rex Allen, Jr.

Truly an American success story, Rex Allen is known as “Arizona Cowboy” and “The Voice of the West.” But to the folks at Willcox, he is a real cowboy who became the last of the singing cowboys of Western movie fame. Most importantly, he is their cowboy.

A portion of the museum displays awards, costumes and information on the career of Rex Allen Jr., who followed in his father’s footsteps. Rex Jr. built his own career in country music with hit songs in the 1970s and ’80s and wrote the alternate state anthem, “Arizona.” He has narrated Disney films, made movie and television appearances and done many commercials.

The museum also houses the Willcox Cowboy Hall of Fame, which celebrates those cowboys who ride herd on cold nights, round up strays for branding and believe in a man’s word and handshake. Walls of one room of the museum display portraits and photographs of inductees who call Cochise County their home.

“The early western movies we made were a poor imitation of the reality of the cowboys who made their living on the range. We knew better.” —Rex Allen