You are here: Home / Top Stories / A Footbridge Worth Seeing
This post may contain affiliate links or mention our own products, please check out our disclosure policy here.

The name Santiago Calatrava meant something only to architects and fans of flamboyant architecture before the Sundial Bridge opened in Redding, California, in 2004. But now, eight years later, the bridge is famous, and Calatrava has won international acclaim for the main stadium he designed for the Olympic Games in Athens, and for the transportation hub that is due to open on New York City’s World Trade Center site in 2014.

Redding may seem like an odd location for the work of a renowned architect. A city of just under 90,000, Redding is best known as a historic logging center and a refueling stop for drivers traveling on Interstate 5 between the Central Valley and Oregon.

The Sundial Bridge was built in Redding to carry foot traffic from the museum at Turtle Bay Exploration Park across the Sacramento River to the McConnell Arboretum and Botanical Gardens.  You can imagine what it must have taken to convince the populace of this small conservative city to support the hiring of a Spanish architect to design a project that would cost $23.5 million. For a footbridge! 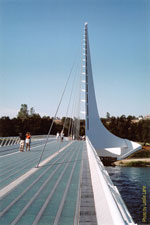 Fortunately, the McConnell Foundation, a private, independent foundation, funded most of the cost. And more importantly, they got it right. When the bridge opened to the public on July 4, 2004, it placed Redding prominently on California maps as a “don’t miss” attraction for I-5 freeway flyers.

The main steel pylon that supports the bridge—weighing 580 tons—rises 217 feet above the river. The bridge deck—720 feet long and 23 feet wide—took 200 tons of granite and translucent glass, and is supported by 4,300 feet of steel cable stretching up from the deck to the top of the main pylon.

The bridge is oriented north to south, so the pylon casts a giant shadow across time markers to create a sundial—which is exactly accurate on only one day a year, the summer solstice on June 21. The tip of the shadow moves at approximately one foot per minute so that the Earth’s rotation about its axis can be seen with the naked eye.

You can cross the bridge for free from either the Turtle Bay parking lot on one side of the river or from the Sacramento River Trail, part of an 80-mile system of paved and natural surface trails popular with hikers, walkers, bicyclists and nature lovers, on the other. 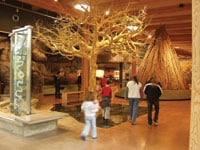 Turtle Bay Exploration Park
Turtle Bay Exploration Park’s goal is to educate and entertain modern day explorers in the interaction between nature and humans, from today back to when Native Americans lived and fished for salmon along the banks of the Sacramento River.
The Turtle Bay Museum features permanent, interactive exhibits and two large exhibition galleries for traveling exhibits. You can see fish underwater, walk through historic settings, see multimedia exhibits, and experiment with scientific equipment.

You can sit on animal skins in an authentic bark house in the People of the River exhibit and listen to recorded songs and stories of the native Wintu people. You can also see a covered wagon packed with the typical supplies of “Forty-Niners” as they set out to prospect for gold. 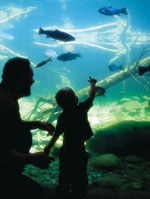 In the Paul Bunyan Forest Camp, young foresters can explore an old sawmill, try out tools, and learn about the relationships between people, forests, rivers and wildlife.

Central to the children’s garden is the Mosaic Oasis, where artist Colleen Barry has combined slabs of tile, broken mirrors, chunks from the building of the Sundial Bridge, and chipped coffee mugs to create an unusual and contemporary art piece. Bright in color and rich in textures, the play sculpture and water fountain invite activity and adventure. A mosaic climbing turtle leads to a curved mosaic wall with bench seating for relaxing and enjoying the warmth of the Sacramento Valley.

The trickling sounds of water call visitors to a calming place nestled within the Pacific Rim Garden designed by world-renowned ecological artist Betsy Damon. The large water display raises questions of water quality and quantity, important elements of California’s water supply.  The Sounds of Water display, located in the center of the gardens, can be explored by climbing, touching, reading, and examining how water relates to and provides sustenance to all living organisms. 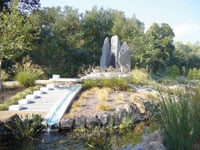 The arboretum extends over 200 acres and is linked to the award-winning Sacramento River Trail.

When your feet start to complain and your stomach growls, a welcoming patio garden restaurant overlooking the bridge is a relaxing respite where you can enjoy a variety of daily specials, coffees, espresso drinks and snacks.

If you come to see the bridge, allow time to visit the whole 300 acres of Turtle Bay Exploration Park as well, and if you come to visit the park, be sure to stroll across the bridge and gaze up at the white pylon reaching into the cobalt blue sky and the river flowing beneath your feet through the translucent glass floor.

Bob Difley was a full-time RVer for 17 years and a regional general manager for a national RV rental and sales company. His articles and photos have appeared in numerous publications.

Turtle Bay Exploration Park is closed Monday and Tuesday in the winter but open every day from April 2 to September 9. Admission is $14 for adults, and $10 for children 4 to 12 and seniors 65 and over. (Senior admission is reduced to $5 on Wednesdays.)