You are here: Home / Top Stories / A Gem Worth Exploring
This post may contain affiliate links or mention our own products, please check out our disclosure policy here.

Next time you find yourself RVing to or from Death Valley National park via the Panamint Valley on Highway178, be sure to stop and explore the Ruth Mine Camp. This rarely visited site is a golden gem!

In 1899, Doug Graham and Smiley Jones found some gold float in the Homewood Canyon. They followed it up to the source and established the Graham-Jones mine. Production started on the mine the same year. Through the years of developing the mine, Graham planted a grape arbor and grove of saltcedar trees, some of which are still growing to this day. It was quite common to find many of the locals spending the night in the arbor to escape the hot summer nights from the valley below while listening to Graham play his violin. 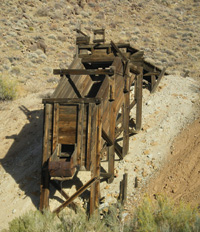 The pair worked the mine until 1917, at which time Jones left Graham to continue mining by himself. Graham worked the mine until 1930. Unable to pay the taxes, Graham persuaded two acquaintances, Fred Austin and Dr. Evans, to grubstake him and pay the back taxes on the mine. In return, Graham gave each man one-quarter ownership in the mine. Several weeks later, Graham was robbed of his $300 grubstake money and passed away the following week.

Production Grows
In 1937, the Burton Brothers, owners of the famous Tropico Mine in Rosamond, California, leased the mine from Austin and Dr. Evans. Within a few years they had installed a 40-ton cyanide mill, which they soon increased to handle 70 tons of ore per day. To supply enough ore to keep the mill running 24 hours a day, they also leased the nearby Davenport Mine. By then, the mine was no longer referred to as the Graham and Jones mine, but had been renamed the Ruth Mine

By 1941, the mine site was reported to have a population of 62, of whom 25 were employees. It now had become a small town, complete with its own general store and school district. The schoolhouse had 22 students and an apartment for the teacher. The general store also served as a saloon for special occasions and Friday night celebrations. In addition, there was a mess hall and bunkhouse capable of serving 25 miners. 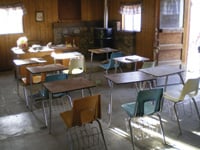 The Ruth Mine camp was a busy place until 1942. On October 8 of that year, President Roosevelt issued order L-208, which shut down all non-essential (that which was not related to the war effort) mining in the United States. This order basically shut down all gold mines in the United States as gold had little military value. Nearly overnight, the camp became a ghost town. Attempts to restart the mine after the war were unsuccessful. In the 1970s, the Ruth Mine shut down for good. Equipment was looted, sold off or scrapped.

Mill Removed
In 2004, the U.S. Bureau of Land Management attempted to bring the mining site into the Adopt-A-Cabin program by hosting a “Take Pride in America” event in January of that year. The Adopt-A-Cabin program, started in 1989, was a partnership in which volunteers provided the labor and the BLM provided the materials to repair historic cabins once used by miners and ranchers in the Southern California area. The event was a great success and over 120 volunteers came out to participate.  More than three tons of trash and other debris were removed from the site. 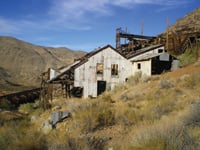 Liability issues and conflicts between the mine owner and the BLM ended that program shortly thereafter. Next, a volunteer group called Friends of the Ruth Mine began working with the mine’s owner to restore and maintain the area, installing interpretive panels at the site to tell the story of this special place. Most recently, the BLM has taken over the site, removing the historic mill to reclaim the mine tailings and limiting access to the buildings to prevent vandalism. Despite removal of the mill, there is still plenty to see at the Ruth Mine along with plenty of history to absorb. Visitors can walk the grounds touring the remaining buildings, including the saloon and the schoolhouse. There is no cost to visit or camp at the site.

Dave Helgeson and his wife promote RV and manufactured home shows in western Washington. They spend their free time traveling and enjoying the RV lifestyle.

The site is open year-round. Due to the heat of summer, the best time to visit is November through April.

Note to RVers: The road to the Ruth Creek Mine dead-ends just past the camp. There is limited room to turn around or park an RV. If you are camped in the area, it is best to visit in your dinghy or tow vehicle. If you are just passing through on your way to or from Death Valley, you will find a wide pull-off on the north side of Homewood Canyon road at N35 53.527  W117 21.572. Park longer RVs here and continue with your dinghy or tow vehicle to the mine site.