You are here: Home / Top Stories / A Ghost Town with Orchards
This post may contain affiliate links or mention our own products, please check out our disclosure policy here.

Ghost towns come in all types: There are the true ghost towns that are totally abandoned, their buildings slowly crumbling from the elements. Often there is little, if anything, remaining of these settlements people once called home. It is difficult to imagine what daily life there was like.

Then there are ghost towns like Virginia City or Tombstone that have been gussied up for tourists. While the original buildings remain much as they did during their heyday, they seldom reflect the daily life that occurred within their walls.

Within the borders of Utah’s Capitol Reef National Park, you will find a ghost town that lies between these two extremes. The settlement of Fruita has been preserved just as it was when it thrived many years ago, allowing you to envision what life must have been like for those hardy souls that settled there over one hundred years ago. 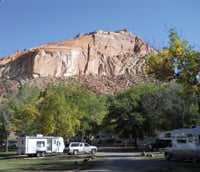 Let’s take a step back in time as we look at the history of Fruita. It was established under the name “Junction” in 1880 by a group of Latter-day Saints led by Nels Johnson. They were drawn to the site by the relatively long growing season, abundant water and the desire of the church to settle remote locations. The Fremont River was the key to the settlement—without the life-giving power of the river, farming would have been impossible.

The settlers dug irrigation canals and planted thousands of fruit trees bearing apples, apricots, pears, plums, peaches and cherries. Settlers also planted walnuts (English and black) along with almonds. Grape arbors were planted in later years. The orchards flourished and before the turn of the century, Junction became known as “the Eden of Wayne County” for its large, lush orchards.

To get their crops to market, residents built a wagon road through Capitol Gorge that extended down the Fremont River to nearby Caineville and Hanksville. This primitive roadway, which was completed in 1884, was named the Blue Dugway and served as a shipping corridor until after World War II. This narrow wagon track was so restrictive that it kept the little fruit-growing settlement pretty much isolated from the rest of the country until the mid-20th century. Due to isolation, cash was in short supply, and settlers bartered for most goods and services. 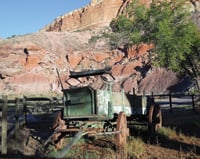 In 1896, with the basic essentials of commerce and housing in place, settlers turned toward educating their children, building a one-room schoolhouse. The few pupils (the population of Fruita never surpassed ten families) were instructed mainly in the three R’s—reading, writing and arithmetic. The desks were movable, allowing the community to enjoy dances, box socials and church services in the quaint building. In 1902, the name of the settlement was changed to Fruita. The settlement never incorporated, leaving the presiding elder of the Mormon Church to serve as the local authority. While the rest of the country modernized in the new century, farming techniques in Fruita remained much as they had been during the 19th century. It was not until World War II that the first tractor was purchased.

Isolation Ends
In 1937, President Franklin D. Roosevelt established the Capitol Reef National Monument to protect the sandstone canyons surrounding Fruita. The influx of outsiders coming to visit this newly proclaimed wonder finally forced Fruita to face the 20th century. Locals went to work serving tourists or the National Park Service. While it wasn’t recognized at the time, this would be the beginning of the end for the little settlement of Fruita.

Paved roads reached Fruita in 1952, and the National Park Service began to purchase private land within the monument’s boundaries. Most landowners were bought out by 1955 and the last left in the late 1960s. Sadly many homes and outbuildings were razed.

While many of the buildings of Fruita are gone, the 200-acre Fruita Rural Historical District is listed on the National Register of Historic Places and the area is being preserved. A few structures remain, including the schoolhouse (restored by the park service in 1966), and the Gifford house and barn.

The Gifford family was one of the last families to depart Fruita. Their homestead includes a farmhouse, garden, barn, smokehouse, pasture and numerous rock walls. The Gifford farmhouse has been restored and refurnished, serving as an interpretive site for the Mormon settlement. The house portrays the typical Spartan nature of rural Utah farm homes in the early 20th century. Polygamist Calvin Pendleton built the house in 1908. He, his wives and children lived in the home for eight years. The original house had two little bedrooms and a front living room that also served as the kitchen. A ladder on the outside of the home accessed two additional bedrooms upstairs. Pendleton built the barn and smokehouse, along with the rock walls near the house.

Thousands of Trees
The most prevalent reminders of the past are the acres of orchards that were the lifeblood of Fruita. The park service classifies the orchards as “historic landscape” and preserves them via a small crew kept busy year-round pruning, watering and overseeing the health of 3,000 trees. Management of the orchards presents some challenges for the park service. Because the trees were originally planted in small individual family orchards, each orchard typically contains several varieties of fruit. To simplify maintenance and harvest, Fruita’s 22 orchards are gradually being replanted with the objective of having just one variety of fruit harvested from each.

As each crop comes into season, fruit is offered to the public on a pick-it-yourself basis. There is a nominal charge for fruit picked for home consumption. Fruit consumed at the orchards is free.

As you explore the remains of Fruita strolling past the Gifford home and rows of fruit trees, keep an eye out for the still-in-use historic irrigation system as well as one of the first tractors used in Fruita. The tractor was called the Power Horse and it was designed to pull the same farm equipment that horses had been pulling. Like a horse, the tractor was steered with reins. Finally, finish your visit at the Gifford Homestead, where they sell the most delicious scones and pies.

Enjoy your visit to this unique place, where in another hundred years the cornucopia ghost town named Fruita will hopefully continue to be known as the “Eden of Wayne County.”

Dave Helgeson and his wife, Cheri, promote RV and manufactured home shows in Western Washington. They spend their free time traveling and enjoying the adventures of the RV lifestyle. Dave’s weekly blog, “Adventures in RVing,” can be found at rvlife.com.

IF YOU GO:
When to visit: The best time to visit Capitol Reef is the late spring (mid-April through mid-June), and September through October. Summers can be hot. For visitor information, see nps.gov/care.

Camping: The Fruita Campground is in the heart of the Fruita Historic District, next to the orchards and Gifford Homestead. The nightly fee is $10, or $5 for Golden Age/Senior Pass and Golden Access/Access Pass holders. Spaces are first-come, first-served.