You are here: Home / Top Stories / A Look at Alaska’s Pioneers
This post may contain affiliate links or mention our own products, please check out our disclosure policy here. 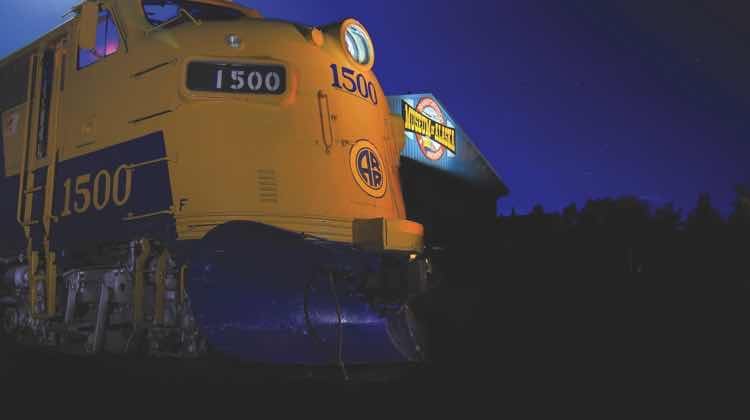 The engine seen in the film “Runaway Train” is on display at the Museum of Alaska Transportation and Industry.
Photo Credit: Bret Baker/MATI

If you want a break from the stop-and-go traffic that can clog highways in Alaska during the construction season or you want insights into Alaska’s history, you can stop and spend a few hours at the Museum of Alaska Transportation and Industry in Wasilla, 47 miles north of Anchorage.

As you enter the museum gallery, you will find aircraft overhead and view the pictures and stories of early bush pilots, both men and women. The strong role of aviation in Alaska today is reflected in the fact that one of every 600 people in Alaska holds a pilot’s license.

Several displays in the gallery and outside on the grounds demonstrate the connection between Alaska and the military. The Alcan Highway through Canada and Alaska was originally dirt and was built to transport military equipment and supplies during World War II. The museum has several examples of military aircraft, and one of its exhibits depicts the story of a son’s search to find and recover his father’s downed World War II plane from the wilds of Alaska.

The center of the museum building contains restored vintage automobiles, including the 1923 Dodge touring car that President Warren G. Harding rode in during his visit to Alaska to drive the spike completing the Alaskan Railroad.

One of the vehicles on display—Al Gagnon’s truck—demonstrates Alaskan ingenuity. Visitors will try in vain to guess the make and model of the truck. Al lived near the Kennecott copper mine, which was 62 miles from the nearest town on the road system and accessible only by rail. Al gathered parts from tractors, mining equipment and anything else he could find to build his truck on his own. And it still runs today.

The displays on the museum grounds include six troop sleeper cars that were refurbished and converted to a history museum on rails for the Alaska Centennial in 1967. The exhibits in the cars include photographs that show the hardships early miners suffered to extract gold, coal and copper in Alaska. The exhibits include the implements and equipment used to operate the mines and rail lines.

At the front of the troop cars are the train engines that were featured in the 1985 movie, “Runaway Train,” starring Jon Voight and Rebecca DeMornay.

Since much of Alaska is still without roads, Alaskans have come up with other means of transportation, including dog sleds. Many people have replaced their dog sleds with “iron dogs” or snow machine, and you can find examples in the museum of early iron dogs that look nothing like the snow machines of today. An annual Iron Dog Race in February covers more than 2,031 miles of ice and snow over mountain ranges and down stretches of frozen rivers.

Other museum exhibits include fire trucks used throughout the state, double-ended fishing boats that were used in Bristol Bay before the invention of outboard motors, farm equipment used by original colonists in Palmer in the 1930s, rescue equipment from the Mount Marathon foot race, and Anchorage’s original airport tower.

Nancy R. Hall, a museum volunteer, said the museum offers visitors the opportunity to “learn about the real Alaska and Alaskans.” A visit to the museum, she said, can “dispel the images and misconceptions from all those fake TV reality shows.” She added, “Alaska was settled by men and women with the pioneer spirit and because of the remoteness they had to be resourceful, inventive and ingenious by necessity.” The museum shows how pioneers overcame obstacles to create the Alaska of today.

The Museum of Alaska Transportation and Industry began in 1967 in Anchorage as the Air Progress Museum and included transportation artifacts gathered for the centennial celebrating the purchase of Alaska from Russia. Fire forced the museum to close, and in 1976 the museum collection found a new home at the Alaska State Fairgrounds in Palmer. It moved to its new location in Wasilla in 1992 and now occupies more than 20 acres. It is operated by a private, nonprofit corporation with a volunteer board of directors.

The museum is open from 10 a.m. to 5 p.m. from Mother’s Day through Labor Day. There is RV parking with a looped driveway, and the museum includes a gift shop, picnic grounds and rest rooms. The facility is handicapped accessible. For information, visit museumofalaska.org.