You are here: Home / Top Stories / A Mammoth Jazz Jubilee
This post may contain affiliate links or mention our own products, please check out our disclosure policy here. 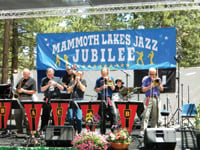 Two hundred miles south of Reno on the eastern side of California’s Sierra Nevada range is the little village of Mammoth Lakes, a center for fishing in summer and skiing in winter that in mid-July is filled with the sounds of hot, cool, swinging and jumping jazz.

This year at the 7,800-foot elevation of Mammoth Lakes, the mountains were still snowcapped as bands with names like Barehanded Wolfchokers, the Professors, Side Street Strutters, the Rhumba Bums and Gator Bear arrived to perform in nightclubs, tents, a wooded hollow, theaters and halls during the annual Mammoth Lakes Jazz Jubilee.

Outstanding musicians from across the U.S. converge here not only to play with their usual groups, but also to sit in with other talented musicians.  Terry Myers can usually be found blowing his sax in Bill Allred’s Classic Jazz Band, but he was also on stage with Tom Hook’s Black Dogs and led the 26-member Terry Myers Big Band assembled for this one special performance.  “It would be difficult to keep a band of that size together,” Myers said, but for one night he had put together the music charts and cajoled musicians into recreating the big band glory days of the 1940s.

Pianist extraordinaire Jeff Barnhart started the festival off Wednesday evening with the group Jas’m that included his wife, Anne, on flute and another husband and wife team of Matt and Sherry Bottel on banjo and vocals. Toes started tapping as the beginning notes of “When Blue Turns to Gray” started to roll out of the piano and the sounds got more infectious as dancing ensued next to the stage. Barnhart also leads the Titan Hot 7, a powerhouse ensemble that can play you a traditional jazz, swing, ballad, blues, or ragtime tune interspersed with humor, leaving smiles on everyone’s face. The Barnharts and drummer Danny Coots are also Ivory & Gold, a melodic and diverse trio that can play jazz, ragtime, show tunes and gospel equally well. 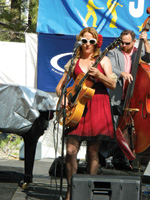 The most popular and largest venue at the festival is “the Holler”—a shaded grove under the tall pines that all 30 bands play at least once. While this is a great showcase and has a huge dance floor, it can get cool when the afternoon breeze kicks up and downright cold in the evenings, leading many to the bar.

“I need a little bourbon to warm my fingers,” said Black Dogs pianist Tom Hook during an evening set. “I think I’ll warm mine from the inside,” he added, while toasting the audience.

Banter between performers and fans is commonplace at the Mammoth Lakes Jazz Jubilee, and is something not found at larger, more impersonal festivals. Here there were no long lines nor huge crowds to contend with, giving the four-day event a kicked back, relaxed atmosphere.  Each of the eight venues had dance floors with plenty of room to swing your partner around.

Jazz fans had the opportunity to add to their musical knowledge. Bandleaders introduced songs with a little background about the tune, and some events were set up to impart equal amounts of information and music. Tom Hook sat at his piano in the theater and spent an hour telling us how the music of New Orleans originated with the European marches that somehow evolved into the Crescent City sounds as they were mixed with all the other influences from the vast and varied cultures that settled in the Big Easy. All the while Hook played examples to illustrate his narrative and told anecdotes about the musicians and city. “New Orleans is the city that put fun in funerals,” he said with a chuckle.

Side Street Strutters musical director and saxophonist Rob Verdi brought his “Saxophobia” presentation to an RV rec room one morning.  Verdi has 360 woodwind and brass instruments and brought some of the most unusual to play and talk about.  Saxes ranged in size from a six-foot tall contra bass to the miniscule sopranino that was only slightly larger than his hands.  He also brought along the World War II-era plastic Grafton sax that legendary bee bop artist Charlie Parker played.
One of the features of this festival is its variety of jazz.  About 90 percent of the music is some form of jazz, with a few bluesy tunes thrown in. There were also a few zydeco bands and a couple of groups that played music popular in the ‘50s, ‘60s, and ‘70s.

A crowd favorite and my personal favorite was Tom Hook’s Black Dogs. The full horn section could belt out a jump swing beat, shift into a Dixie melody, get way down into a funky New Orleans rhythm and spice it up with a Cajun tune or two. During each set, banjo player Bob Leary always had one of his talking songs that drew belly laughs from the crowd.  Each tune was followed by thunderous applause with equal amounts of dog barks and howls.

You can find out more about the festival at Mammothjazz.org. While there are several hotels, motels and resorts at Mammoth Lakes, RVers have two choices: The Mammoth Mountain RV Park offers 151 sites with various hookup options, or you can dry camp at the Inyo National Forest across the street. One of the festival venues is at the RV park, and a shuttle bus system will transport you to other venues. You should make reservations early because they fill up fast.

Before retiring in 2006, Doug Imberi operated the public affairs office at a military distribution center in Tracy, California. He lives in Salida, California, when not traveling in his fifth wheel with his wife and two mini dachshunds.