You are here: Home / Top Stories / A Museum to See and Hear
This post may contain affiliate links or mention our own products, please check out our disclosure policy here. 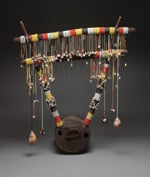 The richly grained Indian sandstone edifice rises from the scrub brush desert of North Phoenix like a stunning mirage. The beauty of the two-story building draws you to a courtyard of rivulets and desert plants, and then into an interior with theatrically graceful lines befitting the worldly treasures it holds.

You’ve entered the Musical Instrument Museum (MIM), built at a cost of $250 million and showcasing thousands of musical instruments from all over the world.

The museum, which opened in 2010, was founded by Robert J. Ulrich, former CEO of Target Corporation. The idea for it arose after Ulrich toured a musical instrument museum in Brussels, Belgium, with fellow art collector Mark Felix. After the tour, Felix mentioned that a museum could be built for the cost of one Monet painting. That discussion led to the creation of a museum that affords equal representation to the musical instruments and music of literally every country in the world.

Ulrich said his intent was to allow museum guests “to hear, see, and feel the powerful uniting force of music in an entirely new way.”

Dr. Daniel Piper, MIM’s curator of musical instruments, said, “When visitors come here, they have a completely different experience than what they imagined a musical instrument museum to be like. They are overwhelmed.”

Visitors cannot only see the instruments, but also hear the music through wireless technology and see it played in original settings on high-resolution video screens.

Dr. Piper said,  “We wanted the museum to be accessible and fun where people feel that these are not just art objects on the wall but where the instruments come to life.” He added,  “We don’t want to just display an instrument, but use it to tell a story about people who are music and instrument makers.”

The museum has a collection of 15,000 instruments dating as far back as 5000 to 4000 B.C. About 5,000 instruments representing 200 countries and territories are on display at any one time. The depth and diversity of the collection is astonishing.  Under one roof you can see the first Steinway piano built in 1836 and the modern Steinway piano where John Lennon composed “Imagine.” You can also see an enormous Chinese drum that was played at the 2008 Beijing Olympics opening ceremonies and listen to Apollonia, the two-ton, 27-foot-wide organ built in Belgium in 1926. The organ incorporates two accordions, a xylophone, a drum set and other percussion instruments and can be found in the museum’s Mechanical Music Gallery.

MIM’s Geographical Galleries group music and instruments into five global regions, and show the ingenuity used to create music in even the world’s poorest countries.  The variety of lutes, drums and wind instruments from all corners of the world boggles the mind. Instruments like oilcan electric guitars and nose flutes with exotic names like Kongomas and Plung Klangs personify music’s universality.  There’s even a re-creation of a Javanese gong factory.

Exhibits in the United States/Canada gallery are organized by musical genres, ranging from hip-hop to Sousa band music. Instruments such as the Appalachian dulcimer, sousaphone, ukulele and electric guitar reflect the diversity of the North American musical experience.  The music of indigenous peoples is presented in eight displays exploring old and modern musical traditions, with instruments from water drums to Apache fiddles. Special exhibits highlight iconic American musical-instrument manufacturers, including Fender and Steinway, and show the stages of production.

Casals to Elvis
The Artists Gallery documents some of the world’s most prominent artists. Costumes, instruments, Gold Records, lyric sheets and Grammy Awards highlight the musical careers of artists from Santana and Buck Owens to Pablo Casals and the “King of Surf Guitar” Dick Dale.  Traveling exhibits highlight everything from wide-ranging musical genres like African thumb pianos to the flamboyant caped costumes of Elvis Presley.

The Experience Gallery has both children and adults trying their hand at playing instruments such as Indonesian gamelan gongs or Democratic Republic of Congo slit drums. Although the cacophony of sound at first may be intimidating, you are soon experimenting with different instruments as you get into, to coin a phrase, “the swing of things.” This could be your first experience playing an instrument and the thrill of making music might spur a lifelong fascination. Watching young children delightfully strumming guitars or plucking harps proves that creating music is, indeed, an instinctive emotion.

The MIM experience literally comes to life in its 300-seat concert hall whose outstanding acoustics inspire the best from world-class performers ranging from pianist Ramsey Lewis to the Leipzig Quartet and from mariachi bands to Japanese drummers.    Films and seminars about musical traditions are also presented in the hall.

Who can recommend the MIM better than the world’s elite performers?  Tony Bennett says, “MIM is my favorite museum in the world.  Everyone needs to see it.”  David Harrington of the Kronos Quartet says, “MIM is a new American treasure.  It’s like walking into the soul of mankind.”

Kent R. Davies is a writer who lives in Phoenix, Arizona.

MIM is located at 4725 E. Mayo Boulevard in Phoenix. Guests with RVs are invited to park on the west side of the parking lot near the bus loading area.

Dr. Piper recommends newcomers prepare for a visit by watching the MIM Experience video on the museum’s website in order to understand the size of the museum and plan a visit.  The website’s calendar lists upcoming performances and demonstrations. The website can be found at themim.org