You are here: Home / Blog / A.W. Tillinghast Enters Golf Hall of Fame
This post may contain affiliate links or mention our own products, please check out our disclosure policy here. 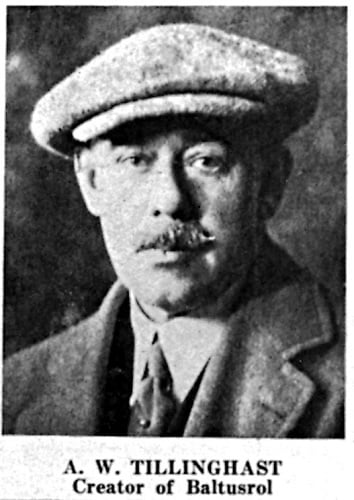 With the Open Championship still being contested at St. Andrews, Scotland this weekend, the World Golf Hall of Fame stepped out of its mold and the United States, holding its annual induction ceremony at the birthplace of golf, the venerable Old Course at St. Andrews. Inducted were Laura Davies, David Graham, Mark O’Meara, and A.W. Tillinghast; the latter, who passed away in 1942.

Why it has taken this long to honor one of the giants of golf’s Golden Age of architecture – the 1930s and 40s – is a little baffling, given Tillinghast’s incredible history of course design. He was a prolific architect in his day, and his course designs have weathered the test of time. In the 2015-16 Golf Digest “Top 100 Golf Courses in America” list, there are eight Tillinghast courses represented.

An original member of the PGA of America, Tillinghast laid out his first course in Shawnee-on-Delaware in 1909 at age 36. During his career, he designed 260 golf courses in the United States. Of those courses, 50 major championships were held at 24 different venues.

Born in 1874, Albert Warren (A.W.) Tillinghast is the sixth golf course architect to be inducted into the World Golf Hall of Fame. Other members include Donald Ross (1977), Robert Trent Jones (1987), Allister MacKenzie (2005), Charles Blair Macdonald (2007), and Pete Dye (2008). Similar to these prominent architects, Tillinghast’s brilliance and creativity is found in some of the greatest golf courses in the United States.

In addition to being an accomplished golf course designer, A.W. Tillinghast was also a prolific writer. Over a 40-year span, he published more than 400 articles and contributed regularly to magazines including The American Golfer, Golf Illustrated, The Professional Golfer of America, Golf, and Golfer’s Magazine. He began his journalistic career as a newspaper editor in Philadelphia covering golf and cricket. Many of his pieces were syndicated in various newspapers throughout the United States.

In 1915, Tillinghast published what became a successful book of golfing humor titled, Cobble Valley Golf Yarns and Other Sketches. He followed with a sequel in 1925 with The Mutt… And Other Golf Yarns. He also produced three volumes of collected articles, and more than 100 of his essays on golf course architecture were compiled in The Course Beautiful.

In Reminiscences of The Links, Tillinghast provides first-hand accounts of American golf’s early history and its connection to St Andrews, Scotland. In the third volume of essays, Gleanings from the Wayside, he recounts his experiences as he traveled around the continent designing and redesigning golf courses.