You are here: Home / Top Stories / Adventures in Magical Moab
This post may contain affiliate links or mention our own products, please check out our disclosure policy here.

Few areas of America pack together as many scenic opportunities for recreation as Moab, Utah. With the delightful town of Moab as the hub of a wheel of wonder, the RV traveler can strike out in any direction and find postcard vistas around each turn in the road. From posh private RV parks to dry camping spots of unbelievable beauty, the rewards of RVing become quickly apparent.

Within or near the city, there are about a dozen private RV parks, allowing the town itself to be the destination. Fuel, large grocery stores, hardware outlets, and great dining can be found within Moab. Two of my favorites are Miguel’s Baja Grill for excellent Mexican food and, for breakfast, Jailhouse Café. The Jailhouse, in the historic old jailhouse building, is open for breakfast only, and the outdoor patio is a great spot to start the day’s adventures. Miguel’s, with both outdoor and indoor tables, is a wonderful lunch or dinner respite from cooking in your RV.

Of course, what most people think of first when visiting Moab are the two nearby national parks: Arches and Canyonlands. The entrance to Arches National Park is a mere five miles north of the city limits. The paved 36-mile round-trip road that meanders through Arches brings awe and wonder with each turn. The road can accommodate nearly any size RV, and has plenty of pullouts and parking lots that lead to sights of indescribable beauty or, for the more adventurous, to hikes into desert delights. The campground at Arches has 50 campsites, but only a few can handle units as long as 30 feet, and there are no hookups or dump station. (The website for reservations is recreation.gov.)

To the west of Moab is Canyonlands National Park, which protects the vistas of river-cut canyons for future generations. The Green and Colorado rivers divide the park into separate units. Two of the units, Island in the Sky and Needles, are easily reached from Moab and are accessible by the trailer-towing traveler. A third unit, called the Maze, is accessible only by dirt roads and is impossible for RV travel.

Closest to Moab is the Island in the Sky district, which can be reached on Utah Highway 313. Along the highway, but before you reach the park, are three Bureau of Land Management campgrounds. One is for group camping and can be reserved. Another, Horsethief Campground, has 56 sites and can take large RV units, but there are no hookups. The third is a walk-in, tent-only campground.

There is a national park campground at Willow Flat, but most RVers will probably choose other options as the size of the largest spot limits units to 28 feet; there are no hookups or dump station, and you must bring all of your own water as there is none at the campground. If dry camping is your style, however, this campground is but a short distance to a viewpoint that is great for sunset and sunrise photographs.

Sixty-five miles south of Moab is the park’s Needles unit, which has an extensive trail system for hikes. On your drive to the park, about 24 miles south of Moab, is a delightful stopping point just off U.S. Highway 191 called the Wilson Arch. And nearer the park, on Highway 211, is Newspaper Rock, where for thousands of years, Native Americans created a profuse number of pictographs that today astound travelers with their beauty.

The Squaw Flat Campground in Needles is similar to the Willow Flat Campground, in that it offers no facilities, not even water, and neither campground accepts reservations. However, immediately outside the park is RV camping at the privately owned Needles Outpost. The Bureau of Land Management’s primitive campgrounds are other options.

Probably the worst-kept “secret” to camping near Canyonlands is the campground at the Utah state park that lies between Moab and Canyonlands. The campground at the wonderful Dead Horse Point State Park has hookups and a dump station. (Reservations may be made at reserveamerica.com). At the park’s visitors center, you will learn the sad story of how the park got its name when wild horses that were cornered on a narrow mesa died of thirst within view of the water several thousand feet below. The campground is a short drive from a viewpoint of scenic splendor that looks deep onto the Colorado River, just as the thirsty horses must have looked in despair and desperation. 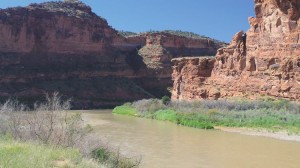 This Colorado River section played the “Rio Grande” in a John Wayne movie.

If you have a four-wheel drive, high-clearance vehicle, you will have access to area roads that are open but require a suitable vehicle. One such road is the Shafer Trail. From near the entrance to the Island in the Sky unit of the park, the road twists and turns down the side of a cliff to a plateau above the Colorado River. From the first junction, the more adventurous driver may take the right turn and head south on the White Rim Road. Watch out for mountain biking enthusiasts on these roads! One viewpoint a short distance on the White Rim Road is the Musselman Arch, a roadway-wide arch over a canyon that cuts to the river below.

If you opt to take the Shafer Trail to the east, it leads to the Potash boat ramp and access to the river. Just a little farther east the trail ends and a paved highway (Utah Highway 279) takes you past petroglyphs and then back to Moab, following the Colorado River. There are three BLM campgrounds found along the river, but only one, Williams Bottom, can take small RVs. The views at Williams Bottom make this worth considering if you can be self-contained, since it is a dry camping site.

Returning once more to the hub of Moab, there are further options to explore. Highway 128, which leads northeast from Moab along the Colorado River, is a spectacular drive. There are BLM campgrounds nestled next to the river that can handle even large RVs, but all are on a first-come, first-served basis. The campgrounds along the river are very popular with rafters, as there are several haul-out locations as you float to Moab. Putting a raft in up river is a wonderful way to beat hot summer days as you float down the Colorado past perpendicular cliffs and sandy beaches.

If you are a John Ford movie buff, Highway 128 offers you the opportunity to look for the setting of shots of John Wayne and Pedro Armendariz in the movie Fort Apache as they waded across the “Rio Grande” and rode into “Mexico.” (The movie scene where two cavalrymen take a drink and throw the empty bottle off the cliff into the “Rio Grande” was filmed at Dead Horse Point State Park).

To the east of Moab lies the Manti-La Sal National Forest, with mountain peaks that are nearly 13,000 feet in elevation. If the heat of summer is too much, climbing into these mountains offers natural air conditioning of 9,200 feet. There are 20 campsites at Warner Campground, managed by the U.S. Forest Service, with some of the sites with back-in lengths of 36 feet. The campground is nestled in an Aspen grove, and the trees provide good privacy. If you have tired of desert camping at the many sites noted above, then a night in the trees is probably just the thing to restore the soul of the RV camper. However, this is primitive camping, so bring all that you need and be prepared to take it back out when you return to Moab, as there is no dump station.

Moab is in the middle of mystic vistas, magnificent country, and along the mighty Colorado River. It is the locus for great RVing, with options from luxurious private RV parks to primitive, but accessible dry camping. It is impossible to just drive through, so plan to spend a vacation exploring magical Moab.