You are here: Home / Blog / Adventures in RVing: Bad Boondocking Manners
This post may contain affiliate links or mention our own products, please check out our disclosure policy here. 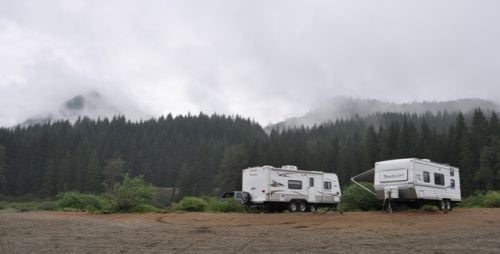 Some friends recently joined my wife and I for what we thought would be a quiet weekend of boondocking along a reservoir in the Washington Cascades. Work schedules allowed us to arrive on a Thursday evening virtually assuring us “first dibs” on the best camp spots. Upon arriving we pretty much had the place to ourselves and we selected a place overlooking the lake with the closest RV (unoccupied) about 100 yards away. Friday found us on a long bike ride away from camp. Upon returning we discovered we had neighbors less than a desirable distance away from us. However, it soon became apparent that the situation would continue to deteriorate when we discovered our neighbors were part of a club as more of their members began to arrive Friday night and fill in between us and the already too close neighbors.

1/ Use Existing Roads & Camping Spots
2/ Pack It In, Pack It Out
3/ Pay Attention To Stay Limits
4/ Keep A Respectful Distance From Your Neighbor
5/ Be Neighborly About Pets & Noise
6/ Be Sociable, Be Private…
7/ Share The Land

1/ Use Existing Roads & Camping Spots – PASS: Other than some tents and vehicles in undisturbed areas, they did fairly well on this one, although one camper decided to camp right on the access road, which is not quite the intent of “Use Existing Roads”.

2/ Pack It In, Pack It Out – PASS: Being that we left before they did, I will give them the benefit of the doubt on this one and assume they cleaned up after themselves.

3/ Pay Attention to Stay Limits – PASS: Being that they were obvious weekend warrior types, I suspect a two week stay would be out of the question for them.

4/ Keep A Respectful Distance From Your Neighbor – Epic FAIL: My wife and I had a tent pitched 10′ from our RV and our friends returned from a hike in their tow vehicle to find their parking space had been taken over by a tent less than 10′ from their RV.

5/ Be Neighborly About Pets & Noise – FAIL: While they kept their music off, liberal amounts of beer contributed to elevated voices throughout the night and early morning.

6/ Be Sociable, Be Private… 50% credit on this one as the neighbor along our RV did introduce themselves and their young daughter befriended me, while our friends’ neighbor was less than pleased to move his tent.

7/ Share the Land – Fail: While our neighbors had equal right to use the land, they failed to share it respectfully.

My goal in sharing these do’s and don’ts is in the hope they might be read by some of our less than neighborly neighbors and be put into practice during future outings. Ultimately, our RV is on wheels and if we don’t like our neighbors we can always move, but being onsite first only to be overrun by others is a bit frustrating. I guess it is just another less than pleasant adventure in RVing!