You are here: Home / Blog / Adventures in RVing: Boondocking With Your Alter Ego
This post may contain affiliate links or mention our own products, please check out our disclosure policy here. 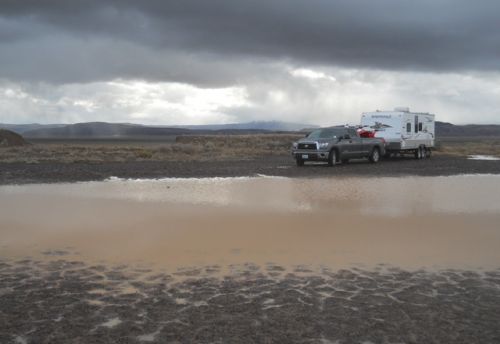 In the last couple of installments we looked at how to position your RV when camping in the boondocks. We looked at view, sun / shade, drainage and several other considerations.

Now I do have to admit that I don’t always follow my own advice. Either that or my alter ego thinks it knows better. I had preselected, via Google Earth, a place to camp in an Oregon Department of Transportation site just north of Fields, Oregon off of Hwy 205. The main purpose for camping here was a convenient place to drop the travel trailer while we drove the truck north up the graveled Fields – Denio Road to explore the Alvord Desert during the afternoon, then return to sleep that evening. We would break camp the next morning so aesthetics/view was not a concern when selecting this space. However, upon arriving at the gravel pit (which had several suitable areas to camp on a firm gravel surface as I knew it would), my alter ego noticed an area up behind the gravel piles that had a nice view of the valley and surrounding mountains.

Other than a depression where you could see water had pooled in the past, as evidenced by the dry cracked clay, the area was fairly level and, as mentioned, had a VIEW! It had rained prior to our arrival and while wet the area was not holding water and was solid. Letting the view and my alter ego win out over my common sense, I chose a campsite along the edge of the depression. Even if it rained some more, I thought to myself, the water wouldn’t come up to the campsite and if the water pooled, it could be navigated around to get back to the gravel. Trusting my alter ego’s judgment (I knew better), I dropped the trailer along the depression.  We made the trip to Alvord Desert and back, enjoyed a campfire and went to bed. In the morning I woke up and opened the blinds to enjoy the view, only to discover a wet snow had fallen during the night and we were now camped on lake front property! While the campsite wasn’t inundated, my planned departure route was. Exiting the RV confirmed my fears, the dry cracked clay that was firm yesterday afternoon was now soft and slippery! Hoping things would be different on the other side of the newly formed pond, I walked around the perimeter hoping to find a safe exit. None existed. So after breakfast and a prayer, I put the truck in four wheel drive low range and made a dash for the gravel with the trailer in tow. Thankfully we made it to firm ground and I didn’t need to summon emergency road service.

Learning NOT to trust your alter ego, just another adventure in RVing.