You are here: Home / Blog / Adventures in RVing: Fire!
This post may contain affiliate links or mention our own products, please check out our disclosure policy here. 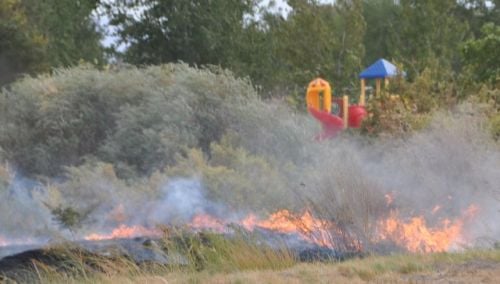 My wife and I were camped along Hwy 95 south of downtown Fallon, Nevada. Even though it was a fairly nice day (although a bit windy), both of us were inside the RV with our attention focused on our laptop computers (sound familiar). We heard a strange noise like a semi-tractor using an engine brake out by the highway. However, when we briefly looked up from our computers, we commented to each other that there wasn’t a semi on the highway. About that same time the microwave in the RV beeped letting us know the power had gone off and come back on. We then assumed, due to the wind, a dead limb had fallen on a wire shorting out a distant electrical transformer and the sound was the transformer blowing up rather than the suspected semi. Rather than take a walk and investigate like an adventurous RVer should, we again returned to our computers. 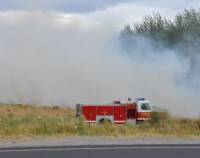 A short time later sirens came screaming down the highway and stopped just down the road. Being a bit more attentive I looked up and paid closer attention to what was happening in our surroundings. Not only did I see fire trucks, but lots of smoke and fire, too! Now the sounds and sights outside our RV had my complete attention. I grabbed the camera and went to investigate. The field across from us was ablaze with the wind rapidly spreading the flames towards more combustibles. Luckily the fire department quickly beat down the flames before they could do any serious damage to persons or property.  While we never did figure out the ignition source of the fire or the odd noise, we did vow to be more attentive to our surroundings in the future and you should, too.

Parked in a brush fire and being oblivious to it, definitely an adventure in RVing!