You are here: Home / Blog / Adventures in RVing: Out of Gas!
This post may contain affiliate links or mention our own products, please check out our disclosure policy here.

by Dave Helgeson
November 5, 2013Filed under: 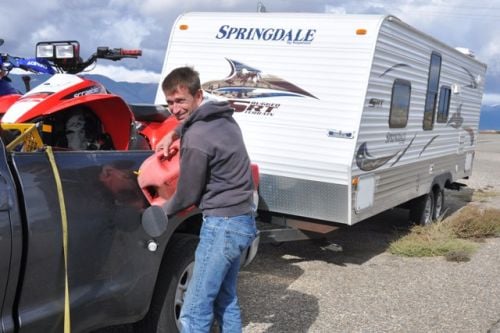 As you have probably learned from following this blog, my wife and I don’t follow the normal tourist crowd. We prefer to be a bit more adventurous and take the road less traveled. Traveling off the beaten path requires a little more planning. Camp spaces are harder to find (hence, we boondock quite often), fuel stations are less frequent, and finding fresh produce can be next to impossible. Recently we were traveling down Hwy 205 through remote parts of Oregon heading towards Winnemucca, Nevada. With several long side trips planned (Steens Mountain, Alvord Desert, etc), I knew fuel would be an issue. Research revealed fuel was available (albeit pricey) in Frenchglen and Fields, Orgeon along with Denio Junction in Nevada. Upon nearing Fields I still had a fair amount of fuel and, according to our on board navigation, Winnemucca was approximately 75 miles away. I decided to continue across the state line to Denio Junction where the Norwegian in me told me fuel would be cheaper since you can pump it yourself (unlike Oregon) and taxes are less. Bad decision!

Upon pulling up to the pumps in Denio Junction, there was a sign informing customers that there would be no fuel available until new pumps were installed in the future. Taking note of the faded, water stained sign, the future could be a long ways away! The choice was to backtrack to Fields or push on. Being a guy, I pushed on. Shortly after leaving Fields we passed a road sign listing Winnemucca as 100 miles distant, not the 75 miles or so that I believed. (Realizing later the onboard navigation had listed air miles, not road miles). At this point I cut our speed to where the transmission stayed in overdrive and the engine was thumping along at about 1,200 RPM to maximize our remaining fuel. Well, eventually the low fuel light came on with considerable mileage left before the next known fuel stop. Luckily I had fuel for our off road toys in the bed of the truck and resorted to using my stash of treasured premium gasoline to get us to Winnemucca.

My hope in sharing this little adventure is to alert others expecting to fuel up in Denio Junction, Nevada that as of this writing, no fuel is available. If you will be traveling Hwy 140 or Hwy 205, take note!

Needing 32 gallons of fuel when you only have a 26 gallon tank, just another adventure in RVing!