You are here: Home / Blog / Adventures in RVing: Sequester Surprise!
This post may contain affiliate links or mention our own products, please check out our disclosure policy here. 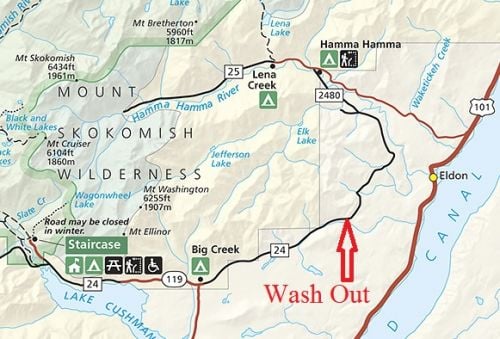 My wife and I were recently invited to explore the homeland of the Skokomish Tribe and the campgrounds they operate. Our visit resulted with an article in the August 2013 issue of RV Life magazine which can be viewed here.

While camped at Skokomish Park at Lake Cushman and studying the map we had been given on the Olympic National Park, I noticed a couple of forest service roads that would allow for a loop drive. The loop would take us up along Hood Canal from Hoodsport to Eldon, then up to the Hamma Hamma Campground, completing the loop using forest service road #2480 and #24 which would return us to our camp at Lake Cushman.

Always looking for a new area to explore, we left camp for what we thought would be a leisurely loop drive. The drive up along Hood Canal was very scenic, the drive through the forest to the Hamma Hamma Campground brought us by several choice boondocking sites which we noted for later use. Soon we had left the asphalt and were on forest service road #2480 heading back towards camp. The well traveled road took us past rushing streams and through tranquil forests. After traveling about 5 miles, we rounded a corner and were greeted with a berm in the road blocking further travel. Exiting my truck, I walked past the berm to see what lay beyond and found the road had experienced a major washout. Judging from the reforestation and brush growing on the closed roadbed, I could tell this wasn’t a recent closure but obviously happened years ago. Returning to the truck and reviewing the map and onboard navigation, I confirmed we were on the right road – they just didn’t confirm that FS #2480 was not currently a through road! Now with no other choice, we turned around and backtracked about 45 miles to camp.

I know the National Park Service and Forest Service are under sequestration along with the rest of the federal government and may not be able to afford new maps or fix roads, however, you would at least think someone with the park service could put an “X” through the road with a marker and the Forest Service could put a sign up at the entrance to the road that it is closed 5 miles ahead for unsuspecting tourists like you and I!

Washed out roads and outdated maps – just another adventure in RVing!