You are here: Home / Blog / Adventures in RVing: Shoot! I Could Have Stayed at Wal-Mart!
This post may contain affiliate links or mention our own products, please check out our disclosure policy here.

by Dave Helgeson
December 3, 2013Filed under: 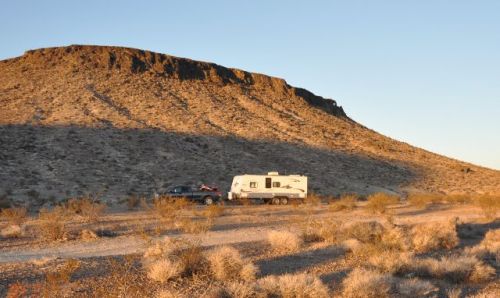 My wife and I were on our way from Las Vegas to Death Valley and needed a spot to camp on the way. I had located in advance (via Google Earth) a side road with what appeared to be multiple boondocking sites off of Bell Vista Road about 8 miles northwest of Pahrump, Nevada. The potential boondocking spaces struck me as odd as the majority of them were oblong and trailed off into the desert (see Google Earth Screen Shot).

While we were passing through Pahrump on our way to boondock, we stopped to do some shopping, with one of the stops being Walmart. As we were loading our groceries into the travel trailer that afternoon I noticed several RVs already camped for the night along the curb. I thought to myself, “why would you camp here when there are all those boondocking sites nearby in the desert?” After a few more stops it was getting late, so it became a race with the sun to reach our boondocking spot before it set. Now for those of you that may not know, Pahrump has become somewhat of a snowbird nesting ground. As we drove, I began to worry, what if all those potential boondocking spots I saw on Google Earth were camp spots known and used by Pahrump snowbirds in the know? Maybe that is why the other RVs were dry camping at Walmart, because there was no room in the desert? What if all the spaces were occupied when we arrived with the setting sun, then what? On and on this went in my head as I anxiously drove to the coordinates (N36 16.867  W116 08.670) for the turn off. As we arrived at the turn off for the boondocking spaces, I was relieved to see that the desert

wasn’t full of RVs. However, my joy soon turned to horror as I saw the sign and mounds of shot up trash announcing the area was an actively used shooting range! Now what? Maybe we should have stayed at Walmart, too! Well, the area is public and it wasn’t posted against camping, so why not? Regaining my composure, we headed into the range eventually finding an area relatively level and free of shooter debris where we set up camp. We enjoyed a star-filled sky that evening and slept peacefully through the night. Passing up a Walmart for a shooting range, just another adventure in RVing.

Note: See the oblong boondocking sites I mentioned above? These are the areas used as target practice with shotguns and other projectiles clearing long paths into the desert.