You are here: Home / Top Stories / Afloat in a Gothic Cave
This post may contain affiliate links or mention our own products, please check out our disclosure policy here. 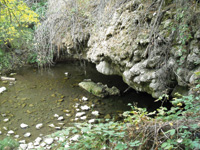 Picture yourself slowly and peacefully drifting atop the cool waters of a lazy stream while you bask in the warm California sunshine. Soon you are no longer feeling the warm rays of the sun and you open your eyes to find yourself bobbing past stalactites and flowstone. That’s right, you’re floating through a beautiful limestone cavern!

It’s a scene straight out of an adventure movie, but it’s not a dream. The best part is you don’t have to traverse a bug-infested jungle, elude hostile tribes with poison darts, or even have your passport stamped to get there. In fact, your RV will be parked less than a mile away awaiting your return from the wilds!

The location is in Calaveras County in the heart of California’s gold rush country. The county is best known for Mark Twain’s 1865 short story, The Celebrated Jumping Frog of Calaveras County, and for its commercially operated caves, such as Mercer, Moaning and California caverns.

On a previous trip through Calaveras County, I heard tales of a place where you could swim or float through a series of caves, no guide or tour fee required. It sounded like a great adventure, but with scant information and limited time, it went on the “next time“ list.

Before our next RV trip through the area, I did a little research and learned the area was named Natural Bridges and found its location. When my wife and I got there, we were amazed. Natural Bridges was far more enchanting than we anticipated. 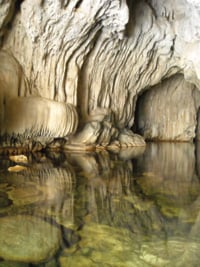 Coyote Creek cuts under two limestone ridges, permitting people to swim or float through the middle of a hill. Even if you don’t want to get wet, the sight by itself is worth the short hike. After all, how often do you get to wade, swim or float through a gothic-style cavern? More amazing is that this area is only designated as a Recreation Area administered by the U.S. Bureau of Reclamation. We have visited state and national parks that were less impressive.

You can explore both upper and lower caverns.  A trail leads to the outlet of the upper cavern. The outlet opening is low and wide, begging for further investigation. The first chamber has interesting cave formations and a small waterfall discharging from the ceiling. With the water less than two feet deep and even-bottomed and with plenty of light, this part of the cave provides a great place for children to play while mom and dad watch from a dry seat at the entrance. The next chamber is a deep one, too deep for wading. The walls of this cathedral-like room soar above and are liable to steal your breath away if the frigid stream hasn’t done so already. A floatation device is recommended through this section. The high ceiling continues in the third chamber, which is also the upstream entrance.

The lower cavern is not as large as the upper cavern, but it is just as extraordinary and is less crowded on busy days.

Although greatly renowned among 19th century tourists, the Natural Bridges today are visited mostly by locals in the know, who enjoy paddling through them on inner tubes or inflatable mattresses. One of those 19th century tourists, James M. Hutchings, visited the area in 1862 and wrote Scenes of Wonder and Curiosity in California. Here is part of his description of the Natural Bridges:

“Along the roof, or arch, hang innumerable stalactites, like opaque icicles, but solid as the limestone, or marble, of which they are formed. 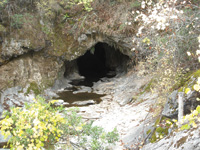 “Here the spacious roof (with a little aid from the imagination) is made to resemble an immense cathedral, with its vaulted arches supported by innumerable columns along the sides, with here and there a jutting portion, as though an attempt had been made to rough-hew an altar, and corridor with massive steps thereto; while stalactites, springing from the bottom and sides, would appear like waxen candles, ready to be lighted, but for the muddy sediment which has formed upon them.

“Numerous other formations, some of them peculiarly grotesque, and others beautiful, adorn the sides and roof of this truly magnificent subterranean temple; one of these, the ‘rock cascade,’ is a beautiful feature, as it (bears) a striking resemblance to that which would result from the instantaneous freezing, to perfect solidity, of a stream of water rolling down the rocky sides of the cavernous formation. Others resemble urns and basins; all formed from the action of, and ever filled to their brims with, clear cold water, as it trickles from the rocks above.

“Advancing beneath its wide-spreading arch, and passing another beautiful fount of water, issuing from a low, broad basin, wrought by nature’s own hand, we arrive at a point where a roof and supporting walls present the appearance of a magnificent rotunda, or arched dome, sixty feet in width, but with a height of only fifteen feet.”

In his closing paragraph Hutchings states, “These natural bridges give to the locality an interest exceeded by few in the State; they form the most remarkable natural tunnels known in the world, serving as they do for the passage of a considerable stream through them.”

I don’t believe anyone could describe these natural wonders better than he did 150 years ago.

While the State of California and the federal government may not consider Natural Bridges worthy of park status, they are definitely worth the effort to include on your next RV visit to Calaveras County. It is a very cool experience!

Dave Helgeson and his wife, Cheri, promote RV and manufactured home shows in Western Washington. They spend their free time traveling and enjoying the adventures of the RV lifestyle. Read Dave’s blog, “Adventures in RVing” at rvlife.com

IF YOU GO:
Getting to the Trailhead: Take Highway 4 to Vallecito, then south on Parrots Ferry Road about 4 miles to N38 03.097 W120 28.252 where you will find the signed trailhead parking on the right. Note to those visiting with their RVs: Trailhead parking is on an old section of road. If you enter this dead-end road there is no turnaround area at the end. RVs can be parked in the dirt pullout along the west side of Parrots Ferry Road at the coordinates listed above. The pullout is fairly steep and it is recommended that you chock your tires and turn off your refrigerator.

Getting to the caverns: The trailhead is well marked. A half-mile downhill hike will take you to the Coyote Creek and the lower entrance to the upper cavern. The trail is an easy hike on a well-defined path. Stay on the path and out of the brush as there is poison oak in the area. Picnic tables are available at the upper cavern. To reach the less-visited lower cavern follow the unmaintained trail downstream as it climbs up and down along the stream bank. It is about a 20- to 30-minute hike.

What to bring: A swimsuit, water shoes, towel, lunch, water and an inner tube or some kind of flotation device so you do not have to fully immerse yourself in the water, which remains chilly even in summer.

The Season: The area is open year-round for day-use only. There is no entrance fee. To avoid chilly days, swimmers and floaters should not plan to visit from October through April. Afternoons are usually hot from mid-May through early September.

Camping: Numerous RV parks are available in nearby historic Columbia. The closest camping to Natural Bridges is at Moaning Caverns just up the road, where they allow you to dry camp in the parking lot for a nominal fee. This is a good place to leave the RV and visit Natural Bridges in your tow vehicle or dinghy.

Additional information: For a full account of James M. Hutchings 1862 visit and description of the area visit Yosemite.ca.us/library.scenes_of_wonder_and_curiosity/Calaveras_natural_bridges.html. For a map of the New Melones Lake area that includes the Natural Bridges trail, visit usbr.gov/mp/ccao/newmelones/maps/map_new_melones_lake_trail.pdf.