You are here: Home / Departments / RV Books / Airstream Memories
This post may contain affiliate links or mention our own products, please check out our disclosure policy here. 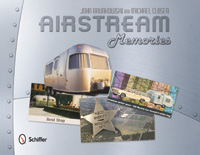 John Brunkowski and Michael Closen are Airstream aficionados who have amassed a large collection of Airstream memorabilia that they share in this unusual book.

The memorabilia include postcards, brochures, advertisements and book and magazine covers. By looking through this collection, you can see how Airstream became an American icon over the years. Whenever an auto manufacturer wanted to show a car or truck pulling a travel trailer, the choice was always an Airstream. Thus, in this collection we have ads with Airstreams being pulled by a Jeep in 1965 and 1974, Buicks in 1966 and 1970, a Chrysler in 1971, Dodges in 1972 and 2002, Chevrolets in 1973 and 1984, a Pontiac in 1978, and GMC trucks in 1984, 1988 and 1991. And the collection also includes a famous postcard from 1947 that shows an Airstream being towed by a bicycle.

The book has many photographs of Airstream rallies over the years, including the international caravans that began in the 1950s.  Thus, we see a large group of Airstreams parked in front of the pyramids of Egypt and at rallies in Canada, Mexico and throughout the U.S. There is also a chapter on photos and drawings that use Airstream trailers in a humorous way.

The authors have been RVers for more than 25 years, and own three Airstreams, including a 1966 Safari. They have amassed thousands of RV-related items, including several hundred pertaining to Airstream.  Their book has 370 pictures, including 285 postcards, all drawn from their own personal collection.

Airstream Memories is published by Schiffer Publishing at $24.99.