You are here: Home / RV News / Airstream Trailer Park Owned by Internet Genius Spruces Up Downtown Vegas
This post may contain affiliate links or mention our own products, please check out our disclosure policy here.

You wouldn’t think that a one acre site in the dilapidated downtown Las Vegas corridor would be home to a burgeoning Airstream community and a multi-millionaire Internet genius, but right now it’s where brilliant minds like Zappos.com‘s CEO Tony Hsieh are reinventing the “trailer park” stereotype and turning urban living on its head.

Known as his “Airstream living experiment,” Hsieh told the Las Vegas Review Journal that he’s temporarily moved into his own trailer park located in the grungy East Fremont district between Ninth and 10th streets. About 20 Airstreams now shine in the hot Vegas sun where they house Hsieh and a creative team of friends, colleagues and visitors, many of whom are working hard to revitalize the downtrodden downtown area into a walkable community filled with start-up businesses, retail and entertainment venues.

A long-time Burning Man Festival enthusiast, Hsieh nicknamed the park “Llamaopolis,” in honor of his pet llama Marley. He told the newspaper that some of the inspiration for the park project came from his experiences at the annual Labor Day festival, which fosters a strong sense of community among thousands of like-minded temporary residents.

Living in his trailer park is like Burning Man, but without the dust. “I see my neighbors a lot more now than I did when living in a house in the suburbs or living in an apartment building” he told the Journal early this year. 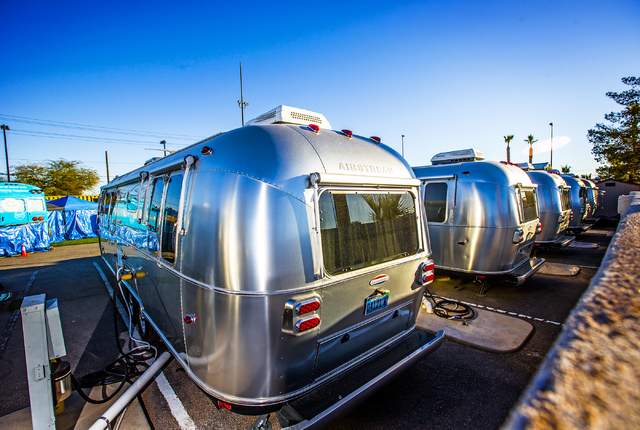 Hsieh ‘s company has long been a player in the Vegas tech scene. When Zappos outgrew its existing office space, Hsieh didn’t want to build sprawling new complex but instead saw the possibilities in revamping downtown Vegas. He moved his business into the downtown area while holding fast to his vision of a walkable, thriving revamped neighborhood with fun places to hang out, dog-friendly parks and a supportive start-up environment for new businesses.

About two years ago personally invested $350 million into “The Downtown Project,” which has since launched several futuristic-like watering holes, including Container Park. This urban revitalization project features small start-up retail and shopping businesses housed in 30 refurbished shipping containers and 41 modular metal cubes. The centerpiece is a giant treehouse playground for kids of all ages. 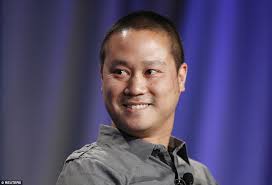 Hsieh, who at age 41 only takes a $36,000 salary from Zappos in exchange for the freedom to run the company as he sees fit, is living in the park with his pet llama and friends from around the globe. The Airstream trailer park has some amenities but Hsieh describes it as a work in progress.

“We’ve talked about possibly one day building the world’s largest Airstream hotel and/or residence to provide a unique hotel/living experience in downtown Vegas,” Hsieh wrote in an email to the Las Vegas Review-Journal. “Part of the goal of the living experiment is to figure out what amenities and elements would make it a fun and memorable experience.”