You are here: Home / Top Stories / Alcatraz: America’s Devil’s Island
This post may contain affiliate links or mention our own products, please check out our disclosure policy here. 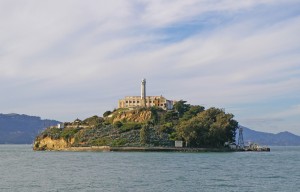 By Tony R. Diaz
It was shortly after sunrise on December 12, 1962, when John Paul Scott half-floated and half-dragged himself out of the frigid water of San Francisco Bay. For the past two hours he had fought the swift currents that pulled him toward the open sea. No sooner had he cleared the waterline than exhaustion, shock and hyperthermia overtook him and he passed out on the rocky shore near Fort Point, under the Golden Gate Bridge. He would have died of exposure on that cold December morning had he not been spotted by a group of teenagers. The teens called the Presidio military police, who took the exhausted swimmer to Letterman General Hospital, where he recovered from his ordeal.  Later that day, strapped to a gurney and under guard, he was returned to his home—Alcatraz prison.

John Paul Scott had done the impossible. He was the only prisoner known to have successfully swum from that penal island to the mainland, and he had—for a short time — the freedom he so desperately desired. His swim for freedom would be the last escape attempt from that bleak penitentiary. 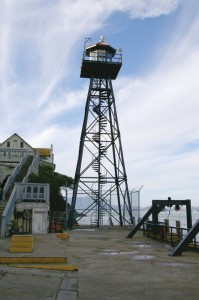 In 1775, Lt. Juan Manuel de Ayala sailed into what would become the San Francisco Bay. He charted the area and, because of the large number of pelicans that nested there, named one its islands “La Isla de los Alcatreces” (the Island of the Pelicans).  It remained the habitat of these birds until the 1850s when it became the property of the United States, and the Army Corp of Engineers was enlisted to fortify the island with coastal guns, a military barracks, and a lighthouse. The spelling of its name was changed and in 1858, Fort Alcatraz became operational.

Besides the garrison that manned the island’s cannons, the barracks were outfitted to house U.S. military prisoners. It would later hold confederate sympathizers during the Civil War, rebellious Indians who opposed the government, and prisoners from the Spanish-American War. Then, after the 1906 San Francisco earthquake, Fort Alcatraz took in its first civilian prisoners, who were temporarily transferred there due to the damage in the city.

As the prison population grew, so did the island’s facilities. A taller lighthouse and new cellblock were built, and in 1915 the facility was officially renamed Pacific Branch, U.S. Disciplinary Barracks— a soldiers prison. The cellblock and lighthouse remain the island’s dominant features today. 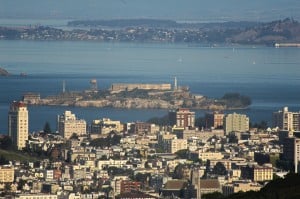 Fortress Alcatraz changed hands in 1934 when the facility officially became a federal prison under the jurisdiction of the Department of Justice.  On August 11 of that year the first group of 137 prisoners arrived on the island, and Frank Bolt, a military prisoner convicted of sodomy, became its first inmate when he was assigned prisoner number AZ–1. Others soon followed, and it wasn’t long before a list of inmates read like a “Who’s Who” of gangsters, bank robbers and murderers. Their ranks included such notables as Al Capone, George C. Barnes (a.k.a. “Machine Gun Kelly”), Alvin “Creepy” Karpis, Robert Stroud (the famed Birdman of Alcatraz), Arthur R. “Doc” Baker (of the Ma Barker gang), and Los Angeles mobster Mickey Cohen.  But the prison cells were never filled to capacity. Inmates at other penitentiaries knew there was always room for one more at Alcatraz prison, which inmates gave another name; they called it The Rock. 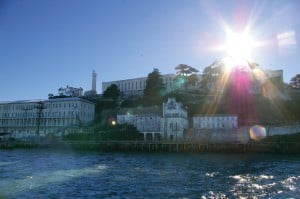 Here prisoners were only entitled to food, clothing, shelter, and medical attention.  Anything else was a privilege that could quickly be taken away for any misbehavior. In the early years even talking among prisoners was prohibited. By the 1950s, this restriction was relaxed and quiet conversation was allowed, but loud talking, whistling and singing remained punishable offenses. And punishment, when warranted, was swift.  Depending on the severity of the infraction it could be something as simple as losing visitation or exercise yard privileges or as harsh as spending days or weeks in the solitary confinement of D-block, where the cells had solid metal, light-proof doors and inmates slept on the cold concrete floors.

For many prisoners, their dull, routine, everyday life was punishment enough. The sights and sounds of freedom tormented the men. On warm summer days they could see bikini-clad girls in sailboats darting around the island and during still, clear nights, inmates claimed the clang of cable cars and light chatter and laughter of San Franciscan cocktail parties penetrated the cold prisons walls. For many prisoners this was more than punishment—it was torture. 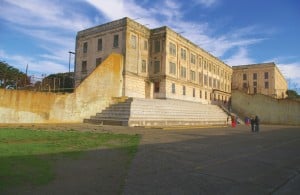 In its history as a federal penitentiary, there were only 14 escape attempts from Alcatraz.  Most were little more than an exercise of desperation and futility, however a few were well thought out and truly ingenious.

The most elegantly conceived escape occurred on July 31, 1945. At that time the prison was under contract to do laundry for the military. Inmate John K. Giles worked in the prison laundry and managed to steal a tech sergeant’s uniform. One day he simply donned the uniform and boarded an Army boat as it was leaving the Alcatraz wharf, blending in with the other soldiers already on board. A count of the number of soldiers on the boat indicated there was one extra. A similar count of Alcatraz workers indicated one convict was missing. The prison called officials at Angel Island—the boat’s destination—where Giles was taken into custody.

In most escape attempts, the prisoners simply intended to quietly slip away from the view of the guards. A few, however, resulted in the killing of prison guards. The most violent of these attempts occurred on May 2, 1946, and was known as the Battle of Alcatraz.  Three inmates armed with two guns and 72 rounds of ammunition took control of the cellblock for two days. They were joined by three other inmates who wanted to break out of the prison. They took nine guards hostage and stuffed them into two cells. Without knowing the number of inmates and weapons involved, prison officials called for the assistance of a detachment of U.S. Marines.

With the arrival of the Marines, the gang realized the futility of their position. Three inmates returned to their cells in the hope that no one would notice they were part of the escape attempt. The Marines cut a hole through the roof and dropped grenades on the convicts, driving them back into a utility space, before they stormed the building. The two-day siege resulted in the death of three inmates and two guards. For their participation in the takeover, two of the three inmates who returned to their cell were executed in the San Quentin gas chamber and the third received an additional 99-year sentence.

Perhaps the best-known escape attempt was masterminded by Frank Morris. He and three other inmates made their attempt on June 11, 1962, with the aid of dummy papier-mâché heads. They had spent months scraping the concrete around the grille at the back of the cell until it could be removed. This gave them access to the utility tunnel that ran behind the cells and led to the cellblock roof. The guards, making their hourly rounds as other prisoners slept, believed the dummy heads were the convicts asleep in their cells.  However, one prisoner missed out on the escape when he couldn’t fit through the ventilation opening of his cell. He desperately scraped the concrete to enlarge the hole.  He finally squeezed himself through to the utility tunnel, but he was too late. The other escapees had already disappeared into the frigid waters of the bay. They were never heard of again. While some believe they successfully escaped from The Rock, prison officials believe they drowned and that their bodies were washed out with the tide. These events later inspired the Clint Eastwood film Escape from Alcatraz. 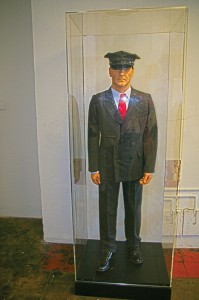 By the 1960s, it became obvious that Alcatraz was too expensive to keep operational.  The salty sea air eroded steel and concrete, sewage polluted the bay, and the cost to run the facility was triple that of other federal prisons. So, on March 21, 1963, three months after John Paul Scott made his desperate escape attempt, Alcatraz prison was officially closed.

The last prisoner to leave the island was Frank Weatherman. As he approached the transfer vessel, he briefly spoke to reporters. His parting words were: “Alcatraz was never no good for nobody.”

Alcatraz Island today is part of the Golden Gate National Recreation Area, operated by the National Park Service.  Each year more than 1.3 million visitors take the ferry ride from Pier 33 near Fisherman’s Wharf to the island penitentiary.  While access to the prison is free, a ticket is required for the ferry.

Once the boat reaches the island, visitors take that long, uphill walk from the dock to the cellblock that so many prisoners did for nearly three decades. And, for a few hours, they try to experience what life must have been like in the prison that became home to the worst of the worse.

Tony R. Diaz is a writer who lives in San Antonio, Texas.

Alcatraz Island is maintained by the National Park Service and is open every day except Christmas, Thanksgiving and New Year’s Day. Ferries operated by Alcatraz Cruises depart for the island from Pier 33 just south of Fisherman’s Wharf. Operating hours vary with the season, but the ferries depart about every ha
lf hour. Reservations are required and tickets do sell out, especially during weekends and holidays. It is advisable to book your passage several weeks in advance. Be aware that trips can be canceled due to inclement weather. Purchase of a ferry ticket includes a self-guided audio tour that is available in several languages. For tour information, visit alcatrazcruises.com or call (415) 981-7625.  The National Park Service website is nps.gov/alca.

Expect to spend at least three or more hours. Bring a light jacket; conditions on the island may be chilly and windy even if the weather at the ferry terminal is agreeable.

San Francisco is not the best place to look for parking, especially if you arrive by RV.  Public parking is scarce and expensive, while public transportation is plentiful. There are a number of RV parks in and around the city where you can leave your vehicle and explore on foot, by bus, or via the BART (Bay Area Rapid Transit) system.