You are here: Home / Top Stories / All-Electric Motorhome Coming to the RV Marketplace in 2019
This post may contain affiliate links or mention our own products, please check out our disclosure policy here.

Climate change forecasts grow more dire by the day. But a new all-electric motorhome could shine a bright spot in the bleakness when it hits the European marketplace in early 2019.

The RV of the Climate Change Age: Iridium, the All-Electric Motorhome is Here

By the time you read this article, a real world all-electric motorhome will be on its way to the January 2019 CMT travel trade show in Stuttgart, Germany.

The exciting clean energy breakthrough in the European campervan industry is the result of a partnership between two German automobile companies, WOF and ElektroFahrzeuge Stuttgart (EFA-S). Both are known for their work in the country’s robust electric vehicle marketplace. The campervan’s electric-powered chassis is built by WOF, while the drivetrain and battery technology is made by EFA-S. Swiss RV designer, Maurer Fahrzeugbau built the RV body. The end result is a sleek motorhome that’s a leap forward in the clean energy vehicle marketplace.

Images of the interior won’t be released until after the January reveal. But this promotional video of a conceptual solar-powered RV design highlights what Iridium’s European-style living quarters might look like:

Until now, the biggest obstacle in creating an all-electric motorhome has been wind. It takes a tremendous amount of energy to move a heavy, tall vehicle at 65 miles per hour. A RV’s wind resistance places a huge load on batteries. This limits most large electric vehicles to a short driving range, typically under 100 miles of travel before they need recharging.

Meanwhile the Iridium RV has a travel range of about 125 miles — for now. Company representatives say that rapidly changing developments in the RV battery marketplace will give buyers’ driving range a boost in in the near future.

“Iridium customers can benefit from the fact that battery capacity is rapidly increasing,” says EFA-S Managing Director Bastian Beutel in the press release. “The same vehicle can, therefore, more than double its range in the near future with the same battery weight by replacing the battery”.

Travel distances aren’t as much of a problem in the densely populated areas inside Europe. Thankfully, Iridum buyers won’t need to worry too much about where they recharge the batteries. Each of these units comes with an integrated charger. This component enables owners to charge batteries anywhere from campgrounds to electric vehicle charging stations. 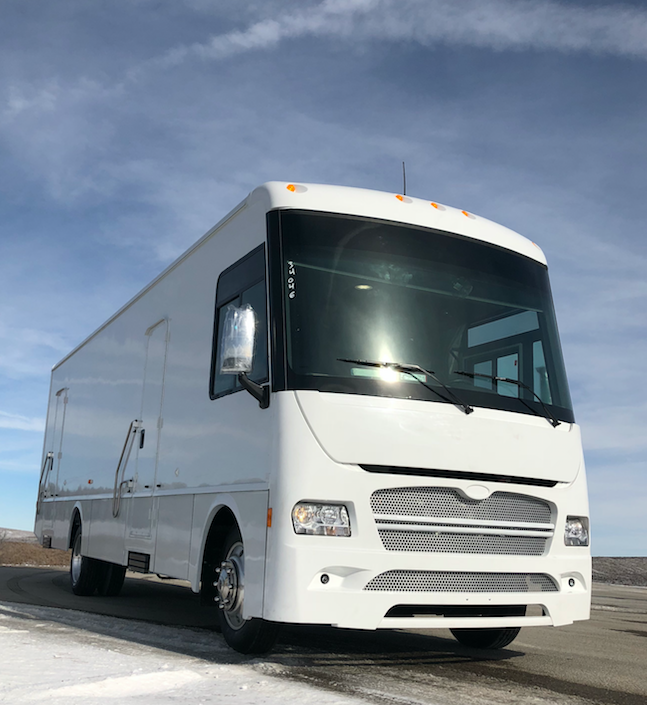 Back in the States, Winnebago is currently toying with their version of an electric specialty motorhome vehicle. The experimental RV is so new it doesn’t even have a name yet, but Ashis Bhattacharya, Vice President, Strategic Planning and Development, and leader of the Specialty Vehicles Division, says this is just the first step in a marketplace Winnebago will be a part of. “We believe that all-electric vehicle applications continue to evolve to serve numerous end-user needs and this is our first step as a participant in this space,” says Bhattacharya.