You are here: Home / Top Stories / Alumination Is A Film Every RVer Will Want To Experience
This post may contain affiliate links or mention our own products, please check out our disclosure policy here.

Alumination, a feature documentary showcasing the history, design, and lifestyle of Airstream trailers, is currently in post-production with an estimated release for 2018.

A departure from previous efforts of capturing the iconic brand, Alumination details the essence of the company in the RV marketplace with a strong emphasis on how Airstream signifies adventure and a spirited lifestyle in American culture. (Images and video courtesy of Silverstream Filmworks)

Although the documentary depicts many aspects of the company – from its rich history and founder Wally Byam to the company in present day – Eric Bricker co-producer, director and videographer of Silverstream Filmworks, took the project steps further into the depth of Airstream and its consumers. 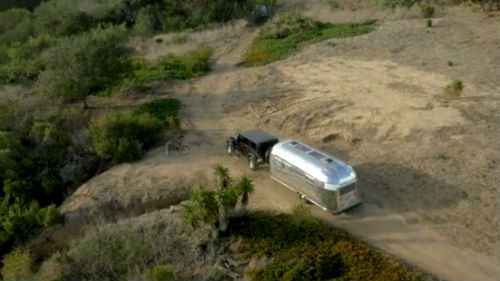 Whether RVers use the new Basecamp or own the Airstream Interstate, the film covers how people connect with one another and live life to the fullest.

“Alumination is not just a movie about Airstream,” says Bricker. “We are deep diving into what Airstream trailers ultimately tap into. The documentary captures individuals exploring the realm of the unknown space where they are able to experience the true sense of living. Additionally, it illustrates how people connect with one another, enjoy nature and live life to the fullest.”

Three years in the making, Alumination was devised in May 2013 when Bricker’s co-producer Lisa Hughes shared the concept of documenting Airstream, covering its unique design and community. Although 100 percent of the financing for the film is through Silverstream Filmworks, the company is accepting contributions for additional support through its Kickstarter Campaign until December 17, 2016.

As Bricker explained he was familiar with the Airstream brand, he didn’t realize how strong the Airstream culture was. This led, of course, to meeting with Airstream’s current president/CEO Bob Wheeler, vice-president of marketing Mollie Hansen, and Dicky Riegel, founder of Airstream 2 Go and former group president of Thor Industries. The trio strongly suggested contacting one significant individual involved in the company’s history – Dale “Pee Wee” Schwamborn – who has been tied to Airstream since its inception. It was also suggested Bricker contact Rich Luhr, event promoter, editor and publisher.

“These gentlemen were like walking Airstream encyclopedias,” says Bricker. “They introduced me to this whole new world where I met full timers, enthusiasts, families, and vintage restorers.” 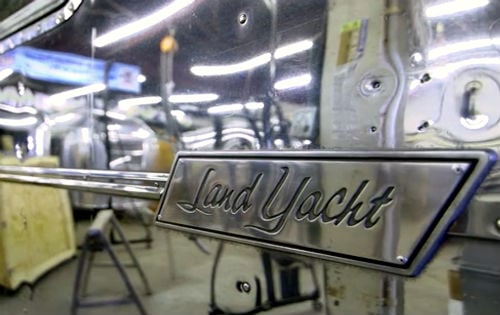 The emblem of the Airstream Land Yacht at the company’s facility in Jackson Center, Ohio.

Digital filming commenced late 2013. He visited many campgrounds, a series of Airstream rallies, National Parks, as well as the Airstream facility three times. In all, he traveled to 16 states over the course of three years, filming and interviewing people from upstate New York all the way to Slab City in the California Badlands.

As a result, among his travels, he interviewed many RVers and experts that are vital to the film’s ability of capturing the spirit of Airstream and its followers. This included (but not limited to) artist Michael Depraida; actor Patrick Dempsey; Paul Mayeux and Ann Flanagan, owners of A&P Vintage Trailer Works in Paradise, TX;  B-52 Kate Pierson; Stewart Reed, the chair of the Transportation Design Department of the ArtCenter College of Design in Pasenda, California; and the Junk Gypsies sisters, Amie and Jolie Sikes.

Also, he contacted the brothers of the acclaimed Airstream commercial photographer Ardean R. Miller III and spent time in the Sequoia National Forest with Mali Mish, a full-timing family of five. 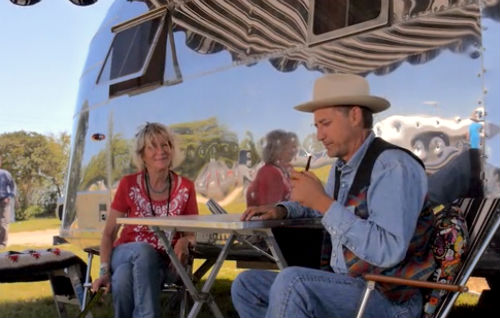 Bricker’s travels led him to 16 states across the U.S., and many walks of life.

“I captured much of the content through interpersonal connections with individuals or small groups,” says Bricker. “It’s fascinating as they all share the same passion. Airstream owners are real adventurers. They have a certain skill set on the road, plus a highly developed sense of self-reliance and interdependence.”

Additionally, Bricker explained the Airstream culture is pure. It’s free of judgement and self-centeredness, which is common in circles of other lifestyles.

“I’m aware that for non-Airstreamers there is a certain perception of elitism, which I think is a myth,” says Bricker. “I didn’t see that at all among the owners I have met. Never before have I experienced the openness of a group who accept people so much. I was very welcome in the Airstream community and it’s very surprising how they enjoy this lifestyle and this country.” 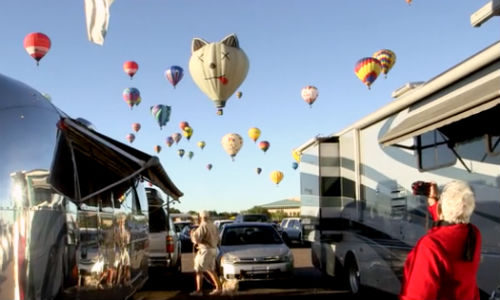 “I hope Alumination will help others realize the value and preciousness of life,” says Bricker.

Approximately 150 hours of footage later and after traveling thousands of miles across the U.S, Silverstream Filmworks is on the home stretch of finalizing Alumination.

Join the Kickstarter Program for Alumination

“When Alumination is complete, I want the film to resonate with the audience,” adds Bricker. “Ultimately, I think Alumination will inspire people to take more time for themselves and be with one another. I hope Alumination will help others realize the value and preciousness of life.”