You are here: Home / Top Stories / An Epic Battle Remembered
This post may contain affiliate links or mention our own products, please check out our disclosure policy here. 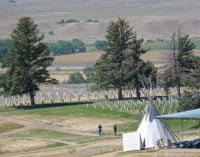 Several decades ago, a friend stopped by our home following a visit with her son in Sun Valley, Idaho. During her western vacation, the son had taken her on a road trip through Idaho, Wyoming and Montana. Of all the places they traveled, she was most impressed by the historic battlefield near the Little Bighorn River. She was an experienced traveler, but said it was difficult to describe her feelings while walking through the stark landscape where so many people had lost their lives. We visited the same battlefield and came away with the same feeling, so we understood why she was so impressed.

Relative to its 138-mile length and modest flow, the Little Bighorn may be America’s best-known river. From its source in the Bighorn Mountains of northern Wyoming, the river flows northward into southeastern Montana as a tributary of the mighty Yellowstone River. While the Yellowstone became famous as the route followed by Captain William Clark’s group as the Corps of Discovery returned home to St. Louis, the Little Bighorn earned fame as the site of the 1876 battle in which Lt. Col. George Armstrong Custer and the Seventh Calvary were defeated by the Lakota and Cheyenne led by Sitting Bull and Crazy Horse.

Custer, an Ohio native and 1861 graduate of the United States Military Academy, earned praise and promotions as a Union officer who participated in numerous Civil War battles. After the war, Custer was assigned to accompany Gen. Alfred Terry from Fort Abraham Lincoln, near present-day Bismarck, North Dakota, in the U.S. Army’s campaign against the Lakota Sioux and Cheyenne.  The army had been charged with enforcing an order of the Commissioner of Indian Affairs to return the tribes to their reservation in present-day western South Dakota. A large portion of the reservation had been overrun with gold seekers, prompting the disgruntled Indians to leave the reservation and initiate raids on settlers and travelers. 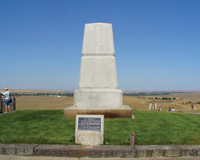 Two additional expeditions, one under Gen. George Crook from Fort Fetterman in Wyoming Territory and another under Col. John Gibbon from Fort Ellis in Montana Territory, were also assigned to the campaign. The three expeditions were to converge in southeastern Montana where the Indians were thought to be camped.

Rather than looking for a battle with the U.S. Army, the Indians were attempting to escape life on the reservation that they intensely disliked. They were a nomadic people who did not easily adapt to a domesticated lifestyle.  Likewise, the soldiers, many of whom were drawn to military service from foreign lands, were following orders issued in Washington by politicians who little understood life in the West.

Custer’s Last Stand
Custer and approximately 650 troops of the Seventh Cavalry were ordered to separate from Terry’s larger group and head south along Rosebud Creek before turning westward toward the Little Bighorn, where he would approach the Indians from the south. It appears after nearing the enemy camp Custer feared the Indians would attempt to escape and decided to attack before the remainder of the expedition arrived. Underestimating the size of the Indian force, Custer divided his regiment into three battalions, a decision that turned out to be a fatal mistake when his entire group of about 210 men was lost in an ensuing battle.

The regiment’s two other battalions encountered their own problems with the Indians and were unable to advance in the direction of Custer’s battle at what is now called “Last Stand Hill.” These battalions had 53 men killed and 50 men wounded.

The battlefield is preserved today by the National Park Service as the Little Bighorn Battlefield National Monument.  The 765-acre area includes a visitor center where you can watch a 17-minute video and tour a small museum. The park service does an excellent job of offering a balanced presentation for one of America’s best-known military engagements.  The conflict is told from the perspective of both the U.S. Army soldiers and the Indians who fought there.

A paved path with exhibit markers leads from the visitor center to Last Stand Hill, where Custer’s body was discovered following the battle. The bodies of Custer and his men were buried in shallow graves near where they fell. Custer’s remains were later moved to the U.S. Military Academy at West Point.

Last Stand Hill, crowned with a large monument inscribed with the names of soldiers killed during the battle, offers excellent views of the battlefield.  An impressive Indian Memorial identifying tribes involved in the conflict is nearby. White marble military headstones and red marble warrior markers indicate locations where soldiers and warriors fell during the battle.

A 4.5-mile paved tour road leads to a second battlefield where two officers, Maj. Marcus Reno and Capt. Frederick Benteen, and their men made a stand until the Indians withdrew the following day. Small signs along the road indicate historic sites where visitors can use their cellphones to learn the significance of a particular location.  You can also buy a CD at the visitor center to assist you on a self-guided tour. One-hour guided tours are also offered.

A half-mile trail leads from the visitor center to a ravine where the remains of Company F soldiers were found.  Another half-mile trail leads from near Last Stand Hill to the location of an attack by Crazy Horse. Custer National Cemetery is a short walk west of the visitor center.
RV parking is available at the monument by driving through the main parking lot to a second lot. RVs are limited to the parallel parking area along the left side of this lot.  Pets are not permitted outside of the vehicles.

Nearby Attractions
Billings, the major city nearest to the battlefield, offers art galleries, theaters, museums, sporting events, outdoor recreation and good restaurants. An abundance of hiking and mountain biking trails are in city parks; fishing, canoeing, kayaking, and rafting are popular in the rivers; horseback riding is offered by two stables, and six golf courses provide opportunities for duffers. Markets, rodeos, fairs and festivals of all kinds take place throughout the year.
Little Bighorn National Battlefield is located within the Crow Indian Reservation, where the annual Crow Fair takes place each year during the third week in August. The colorful fair includes parades, dancers in native dress, and an all-Indian rodeo.  The annual Montana Fair takes place at approximately the same time in Billings.

A 48-mile drive from Little Bighorn Battlefield leads to the northern section of Bighorn Canyon National Recreation Area, where Yellowtail Dam has created the 71-mile long Bighorn Lake. The recreation area possesses towering cliffs, spectacular scenery and great fishing. A camp store, boat ramp and marina with pontoon boat rentals are located in the Ok-A-Beh area.  Afterbay Campground, between the Afterbay and the Yellowtail dams, has 28 RV and tent sites, vault toilets, but no hookups.  Camping is free on a first-come-first-serve basis.

Pompeys Pillar National Monument is an important historical site 80 miles from the battlefield and 33 miles from Billings. The rock outcropping beside the Yellowstone River holds the only remaining mark left by Lewis and Clark during their entire expedition.  In 1806, as Clark was canoeing down the Yellowstone, he stopped to carve his name and the date about halfway up the 500-foot sandstone pillar. A staircase leads to the top of the rock outcropping, and Clark’s signature is visible, under protective glass. The monument has an impressive interpretive center with exhibits and an excellent film.

The scenic resort town of Red Lodge, 62 miles southwest of Billings, is well worth a visit.  The Beartooth Highway that connects Red Lodge with Yellowstone National Park offers one of the West’s most scenic drives. The best way to experience the highway is to engage the services of Beartooth Bike Tours, which provides ferry service up the mountain for passengers and rental bikes. The guided bike ride back down is exhilarating.

David and Kay Scott are authors of Complete Guide to the National Park Lodges (Globe Pequot).  They reside in Valdosta, Georgia.

No camping is permitted at the monument, but commercial campgrounds are in close proximity. Nearby Seventh Ranch RV Camp offers pull-through RV sites, tent sites, four cabins, and a teepee.  Each RV site is 70 feet long with either 30- or 50-amp electrical service. Historical tours are offered (historicwest.com).

Grandview RV Park and Campground south of Interstate 90 at Exit 495 in Hardin has pull-through RV sites with 20-, 30-, and 50-amp electrical service, plus tent sites (grandviewcamp.com).  Hardin KOA, 1.5 miles north of Exit 495 on Interstate 90, offers pull-through sites up to 80 feet in length with 50-amp electrical hookups.  Amenities include cable TV, a swimming pool, a hot tub, and weeknight barbeques (koa.com/campgrounds/hardin).

Two very nice campgrounds in Billings, 65 miles northwest of the battlefield, are adjacent to one another a short distance south of Exit 40 on I-90.  Yellowstone River RV Park & Campground offers pull-through and back-in sites, 20- to 50-amp electrical hookups, a game room, swimming pool, general store, playground, and a gift shop (yellowstoneriverrvpark.com).  Billings KOA offers similar facilities, plus a barbeque restaurant. (billingskoa.com).  Billings is the home base for KOA.