You are here: Home / Top Stories / An Oasis in the Desert
This post may contain affiliate links or mention our own products, please check out our disclosure policy here.

In planning a trip from southwestern Idaho to central Texas, we were surprised to find that our RV campground directories did not show any RV parks between Moab, Utah, and St. Johns, Arizona, a distance of 350 miles.  So we weren’t expecting much when we finally pulled into the campground at Lyman State Park near St. Johns after a long drive from Moab.

We were pleasantly surprised. The well-signed entrance offered space for large RVs to pull up near the registration office. Although the park offers pull-through sites, we selected a back-in site that was easy to get into and that had a brick pavilion with a metal table that could seat six. Just outside were a barbecue and a fire ring. When we started making the hookups, we found the electric box had 20, 30 and 50 amps and there was a water spigot that was high enough to make connecting our short hose easy and yet far enough away from the electric box to avoid any potential safety hazard.  With our RV fully connected, we sat outside and watched the jet skiers on the lake, close enough for a good view but far enough away to avoid noise. 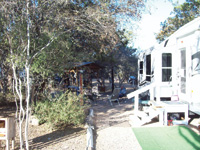 Lyman Lake lies near the border with New Mexico at an elevation of 6,000 feet. It was created as a 1,500-acre irrigation reservoir by damming the Little Colorado River. The lake is large enough to allow swimming, boating, water skiing, jet skis, rafts and canoes.  There is also a “no wake zone” so fishermen can attempt to catch walleye, channel catfish and largemouth bass. The lake is fed by snowmelt from Mt. Baldy and Escudilla Mountain, which are the second and third highest mountains in Arizona.

This park has more to offer than just the lake. Like much of Arizona, this area was home to many different people over the centuries.  Hence, petroglyphs can be found in a number of locations on three different trails within the park. The Rattlesnake Point Pueblo trail is available by guided tour on weekends only.  Ultimate Petroglyph trail is strenuous and can only be reached by boat.

The most accessible trail is Peninsula Petroglyph, which was directly across from our RV site. It had been very hot so we waited until the early morning to start the hike.   Whoever created the trail did so with great care and sensitivity.  Native stone lines the path and wherever it crosses a waterbed, there is a large flat stone over a culvert. The earth is red, there are bushes of green and gray, and then there is the blue lake. We met another couple on the path and they said it was worth going to the top for views of water clear enough to see fish swimming in its depths. They also told us of a tunnel in the rock. We wanted to investigate so we took that way before viewing the petroglyphs.

It got hotter and we got a little winded, but we could see the crevasse just ahead. We sat on a flat rock outside the opening—a great feat of courage as there are many rattlesnakes in this area and Marguerite was sure one was coming NOW. We made our way to the top, where the view was breathtaking.  Upon our descent, we met a park ranger, Jack Stewart, who has ideas on how to improve the park. Not sure if one can improve on perfection, for we thought Lyman Lake State Park was one of the best we have been to.

So, what started as a “We will have to stop here because it is the only place around” became a “Let’s stay another day and enjoy the place,” which is exactly what we did.

(Lyman State Park closed for the winter but is tentatively scheduled to reopen around Memorial Day. For information, visit azstateparks.com.)

Anthony F. Breda and his wife, Marguerite, are full-time RVers and writers based in Linden, Tennessee.