You are here: Home / Top Stories / An Oasis in the Majove
This post may contain affiliate links or mention our own products, please check out our disclosure policy here.

Your first thought as you turn off the main road a short distance before your destination is, “How can anything grow out here in this barren desert?”

Minutes later as you park your vehicle under the shade of towering palm trees, your second thought will be, “What is that glorious smell and where do I find it?”

Welcome to the hidden oasis of China Ranch, a family-owned and operated small farm in an isolated desert canyon near Death Valley National Park in California’s Mojave Desert.

At the end of a twisty dirt road that slices between cliffs devoid of plant life is a little valley with groves of stately date palms, stands of cottonwoods and thickets of vegetation amid the sound of trickling water. It is here that visitors can learn everything they have ever wanted to know about date farming, from the various varieties of dates to growing, processing and cooking. In addition to selling dates, the ranch includes a bakery (the glorious aroma of date bread being cooked greets you upon arrival), snack bar, gift shop, plant nursery, a one-room museum and miles of hiking trails. 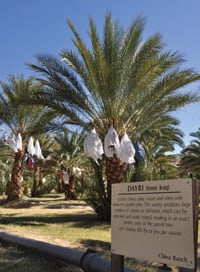 The ranch has been cultivated for about 130 years. An enterprising Chinese man named Ah Foo came to this canyon after years of work in the nearby Death Valley borax mines. He developed an irrigation system and raised fruits and vegetables along with poultry and eggs for the local mining camps. It became known as Chinaman’s Ranch, later shortened to China Ranch. In 1900, a man named Morrison reportedly ran the Chinese farmer off at gunpoint and claimed the ranch for his own. Morrison sold out, but the China Ranch name stuck.

Dates became part of the ranch in the early 1920s when the first date grove was planted from seed by Vonola Modine, youngest daughter of Death Valley area pioneer RJ Fairbanks. In 1970, the property was purchased by Charles Brown Jr. and Bernice Sorrells, the son and daughter of area pioneer and longtime State Senator Charles Brown of Shoshone. It has since been passed down to Brian Brown and his wife, Bonnie. Since it takes palms many years to become mature enough to produce dates, managing the groves means a long-term investment of labor, a lot of planning and love.

Brian has spent years gaining expertise in the growing of dates, while wife Bonnie has developed and tested ways to utilize nutritious dates in recipes, resulting in the breads, muffins, cakes and cookies that are available in the ranch bakery. Recipes for her yummy creations are recorded in cookbooks available for purchase in the gift shop.

The couple is committed to the ranch, spending five years constructing a spacious adobe ranch house for themselves. It is built from over 18,000 handmade adobe bricks, manufactured from native materials at the ranch. Completed in the mid 1990s it contains four bedrooms, three bathrooms and encompasses about 4,500 square feet. The Browns opened the ranch to the public in 1996 and continue to own and operate the ranch today.

Colorful History
The ranch is in an area rich in history. The Old Spanish Trail is within walking distance, as is the historic Tonopah & Tidewater railroad bed. You can also visit nearby historic borax mines.

The Old Spanish Trail is the trade route that connected the northern New Mexico settlements near Santa Fe with those of Los Angeles and Southern California. Approximately 1,200 miles long, it followed a winding route from water hole to water hole across the desert, and so was known as the “longest, crookedest, most arduous trail in the West.”

The trail saw extensive use by pack trains from about 1830 until the mid-1850s. Some of the last to use the trail were parties of 49ers bound for the California gold fields during the fall and winters of 1849 and 1850. Their journals contain numerous notes about the Amargosa Canyon and the area of China Ranch.

The Tonopah and Tidewater Railroad traveled roughly 200 miles through remote reaches of the Mojave Desert, Death Valley and the Amargosa Valley. Francis Marion Smith, the “Borax King” and owner of the Pacific Coast Borax Company, built the railroad in the early 1900s. It was primarily used to transport borax to processing and market. By 1940, the rail line was out of service and scrapped for war materials in 1942. Sections of the abandoned rail bed, ties still in place, can be hiked to just downstream from the ranch.

Borax has been mined in the Death Valley area since the late 1800s. The Death Valley Days radio and television programs of the 1950s and 1960s promoted Twenty Mule Team Borax and Boraxo soap. Old borax mines can be found in several areas around the ranch.

Wildlife and Trails
With the China Ranch Creek and the nearby Amargosa River creating a wetlands retreat for resident and migratory birds, the China Ranch has become a hot spot for bird-watchers. More than 225 species of birds have been recorded in the area, some coming from as far away as Central and South America.

The water and vegetation of the ranch attract a large variety of native desert animals too, including gray and kit foxes, bobcats, kangaroo rats and pack rats, coyotes, cottontail and jackrabbits. Keep a diligent watch, as you are far more likely to see their tracks than the elusive critters themselves. Poisonous snakes are surprisingly rare around the ranch, with several non-poisonous varieties being much more common. Desert insects you may encounter include tarantulas, scorpions, black widow spiders and whip scorpions. Though their bite or sting may be painful, none are truly dangerous to man with the exception of the black widow.

The Browns invite exploration of the area on foot and horseback. Inquire at the gift shop about maps for six trails radiating from the ranch. The easiest trail explores the ranch grounds and groves, where you will find sites for picnicking. Other trails of varying lengths and difficulty explore the Amargosa River Canyon, a nearby slot canyon, the route of the historic Tonopah and Tidewater Railroad and beautiful desert canyons and landscapes.

Once you have soaked in the history, hiked a trail or two and communed with the wildlife, don’t forget about the reason this unique place exists, the dates! China Ranch offers several varieties of California dates as well as their own hybrids. Try a sample of some delicious date nut bread, muffins or cookies, or take home one of their unique handcrafted gifts. Finally, order a delectable date shake as you leave China Ranch for the desert drive back to your RV.

IF YOU GO:
Best Time to Visit:  China Ranch makes an excellent destination during the cooler months of the year.

Directions: From the eastern outskirts of Tecopa head east on Furnace Creek Road for a couple of miles to the China Ranch Road, where you will find a sign directing you to the ranch. Take a right on China Ranch Road. This short unpaved route soon drops into a canyon and winds past old borax mines before arriving at the ranch. The China Ranch Road is suitable for smaller RVs, but with limited parking and rough spots in the road, it is recommended to visit in your tow vehicle or dinghy. It is less than 100 miles from Las Vegas to China Ranch.

Camping: Numerous campgrounds can be found at the nearby community of Tecopa Hot Springs.

For more information: The China Ranch web address is chinaranch.com and the phone number is (760) 852-4415.