You are here: Home / Top Stories / Baja RV Camping: Is It for You?

We first visited Mexico in 1985 with our two children, Kirsty and Kenneth, then 4 and 2 years old. We had planned to go with friends who had traveled extensively in Mexico, but when it came time to depart, they bailed on us and we went alone. Our families were frantic, convinced it was profoundly unsafe, we would be murdered, and our kids would be kidnapped. In summary, they would never see us again. Their fears were unfounded, but the trip was an adventure that would change our lives forever. Our experiences on Baja and then mainland Mexico were the foundation that led us to create Baja Amigos RV Caravan Tours in 2009, and we have operated it continuously ever since.

Broad beaches such as this one at Playa Santispac lure RVers.
Photo Credit: Dan and Lisa Goy

With the Pacific Ocean on the West and the Sea of Cortez on the east, Baja California has twice as much coastline as the state of California. The completion of the 1,061-mile Mexican Federal Highway No. 1 from the U.S. border to Cabo San Lucas turned this magnificent peninsula into a camping destination, with RVers staying on beaches, in the desert and at RV parks and campgrounds. We see a real cross section of RVers traveling in Baja California. Some are new to RVing, some are Snowbirds looking for somewhere different to spend the winter and many have Baja on their bucket list, with interest in visiting only once (just like a trip to Alaska).

Whales can be seen up close in Baja California.
Photo Credit: By Dan and Lisa Goy

We refer to Baja California as Mexico Lite because it is very different from mainland Mexico and has always been that country’s frontier, like the northern territories in Canada or Alaska in the U.S.

You can find all sorts of RVs in Baja, such as this 1950s customized Oldsmobile.
Photo Credit: Dan and Lisa Goy

On our caravans, we do our best to prepare RVers for what Baja has to offer: stunning beauty, camping on the beach, spectacular scenery, swimming with whale sharks and sea lions, seeing and maybe touching whales, warm tropical climate, terrific margaritas, great taco stands, and the opportunity to become immersed in Mexican culture and history. It is something very different from what you would ever experience in the United States or Canada.

Dogs run free, both on the beach and in the towns, and in many places there is an abundance of garbage (particularly plastic bags). Speed limits are posted, but they seem to be optional, and so do regulations on seat belts, distracted driving and when a motorist can pass or not. Stop signs seem to be mostly regarded as slow signs. The roads are getting much better (a significant change from even 10 years ago), but there are bad sections, and the work to improve the roads means that road construction is often underway, which can be challenging.

Baja highways have been vastly improved but you may still encounter obstacles like goats crossing the road.
Photo Credit: Dan and Lisa Goy

Fewer than one percent of all RVers will ever visit Baja, and the truth is that Baja is not for everyone. We believe a positive or negative experience on Baja is all about expectations and attitude. As we tell folks on our tours, Mexico is still a Third World country, and the campgrounds are rustic and primitive compared to many of the high-end RV parks in Canada and the U.S. RVing on Baja is not the same as cruising around on an Interstate highway in the American Southwest and dropping into a Passport America or Thousand Trails RV park with 30/50 amp services, cable TV, a clubhouse and shuffleboard.

We have assembled the following list of complaints raised by RV travelers in Baja:

Swimming Pools — If you can find them, they will not be heated.

Wi-Fi — Usually not much capacity or far-reaching, often not working.

Roads — Hard to maintain 60 miles per hour in a 9.5-foot lane with potholes and no shoulders.

Cattle, Horses, Goats, Mules — Often wandering on or beside roads, or left to decompose on highway shoulders.

30-Amp and 50-Amp services — Good luck operating that washer and dryer or your two air conditioners.

Restaurants — Lots of Mexican food but no good steaks.

Barking Dogs and Crowing Roosters — Why are there so many near the RV parks?

Sand, Dirt and Dust — Baja has this in spades, especially on the beach, road construction or when the wind is up.

For those up for the adventure, we recommend a good camping book (Mike and Terri Church’s Traveler’s Guide to Camping Mexico’s Baja), a Baja map (AAA Baja California) and a decent Spanish phrase book. Make sure you pick up your Tourist Permit at the Mexican border (we recommend the Tecate crossing) and purchase your Mexican insurance (we use Baja Bound). Insurance is a must. There is nothing stopping you from going alone, and there are lots of options for tours or escort services.

Hope to see you on Baja. 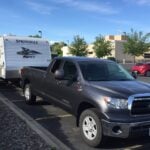 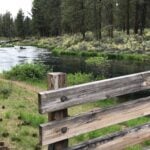