You are here: Home / Blog / Bears In the Wild Are Not Pets!
This post may contain affiliate links or mention our own products, please check out our disclosure policy here. 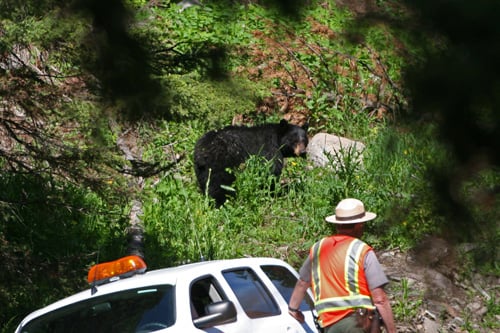 Yellowstone Ranger Keeping Visitors a Safe Distance From a Bear

On May 9, 2015, CBS News ran a clip about a mother black bear charging visitors in Yellowstone National Park. I understood the scene. Too many times in the four months we lived at Yellowstone’s west gate, I observed people taking risks to get that perfect picture of a black bear or a grizzly. They look gentle—even cuddly. We have encouraged that image with posters, stuffed bears, cutesy figurines, and even Smoky the Bear, the symbol of fire safety in the forests. The teddy bear was created in the early 1900s after a story circulated about President Theodore Roosevelt, a sportsman and conservationist, sparing a black bear cub while on a hunting trip. Since that time, most children in America—and even other countries—have had a teddy bear to hug.

While bears have protected habitat in our national parks and forests, the animals live in other places around our country. A few days ago in my home state of Arkansas, a juvenile black bear ran down a street in the town of Bryant. The young bear even slammed into the glass of a pizza restaurant. Some joked, “He was just trying to order a pizza!” Arkansas is home to about 5,000 black bears. Zoologists estimate that there are about 500,000 black bears in North America. Often their forest and mountain habitats are shared with humans. Sometimes, they wander into towns or backyards. A wildlife expert with the Arkansas Fish and Wildlife Service noted that often the two-year-old bears, called yearlings, leave their mother in their second summer and they are looking for food. We can laugh about a bear looking for a sandwich, but human food is a serious matter for the animals. In recent years, our national parks have adopted the slogan: “A Fed Bear is a Dead Bear.” Experts tell us that once a bear tastes seasoned “people” food, he or she never returns to foraging for roots, insects, and berries or fishing in streams. Those who study bears notice that they usually walk slowly and stop often, lifting their snouts into the air to sniff for food or danger. Scientists report that while a bear’s eyesight is not as keen as some animals, its sense of smell is 15 times greater than a human’s. Bears can sniff food from more than three miles away. For this reason, rangers in national and state parks warn visitors to store food in bear-proof steel lockers, often placed in park campgrounds. Bears can sniff out the scent of food—or even make-up or medication—in a locked vehicle. They have the ability to use their sharp claws like a can opener to peel open a window or door. 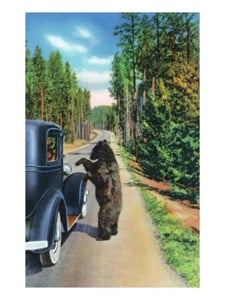 Unfortunately, feeding bears was common practice in the early days of our national parks. Yellowstone, the first national park in the United States, advertised with posters of a bear standing upright at the driver’s window on a Model T. Inside the 1909 Union Pacific Railroad Depot, now a museum in West Yellowstone, Montana, one wall exhibits early posters and prints of bears riding on trains and leading parades, usually dressed in hats and jackets. The framed prints reveal how Americans humanized both the grizzly and black bears in Yellowstone’s early days. Bears begging on roadsides caused frequent traffic jams while visitors inched way too close to snap photographs. 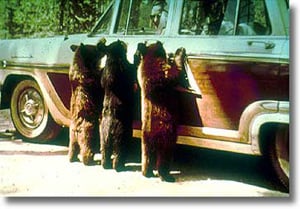 For hundreds of years, bears had roamed the park land, eating mostly roots, berries, insects, ground squirrels, pine nuts, and honey. They love honey. In spring, they fed on fish and the carcasses of winterkilled bison or elk. Then humans arrived, offering their treats of tasty, salty, sugary foods. Soon the bears became as big an attraction in Yellowstone as the geothermal features, waterfalls, rivers, and lakes. As early as 1888, some black bears had lost their distrust of people and were gathering to feed on garbage piles near park hotels and campgrounds. Within a few years grizzly bears were also frequenting park dumps in search of food. The dumps became popular summer tourist attractions. By 1891, the acting park superintendent reported that bears had become troublesome at places in Yellowstone where human food and garbage was deposited. In 1910, the first accounts of black bears begging for human handouts along park roads were reported. By the 1920s roadside “panhandling” by black bears was common—even expected by guests. Similar begging in grizzly bears was not reported, although they did dig in garbage cans and dumps. As park visitation and the number of bear-human conflicts increased, park managers became more concerned with the situation. Between 1931 and 1959, an average of 48 park visitors were injured by bears and an average of 138 cases of bear-caused property damage were reported each year in Yellowstone. The high incidence of bear-caused human injuries was believed due to changes in a bear’s appetite caused by the availability of human food and garbage. In other words, bears were not acting like wild bears. What was initially thought as “cute and cuddly” became unacceptable—even dangerous. 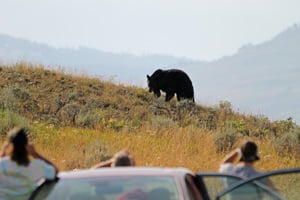 Keeping a Safe Distance from a Bear in Yellowstone

However, change came slowly. As late as the 1960s, families visiting Yellowstone National Park could see bears begging for food along the roadways. In 1970, Yellowstone initiated an intensive bear management program with the objectives of restoring the grizzly bear and black bear populations to subsistence on natural foods and reducing bear-caused human injuries and property damages. As part of the program, regulations that prohibited the feeding of bears were strictly enforced, all garbage cans throughout the park were made bear-proof, and all garbage dumps within the park were closed. The 1970 bear management plan was highly successful in reducing the number of bear-human conflicts and bear-caused property damage. Education for humans progressed slowly, but so did the re-training of bears. Zoologists have learned that bears have excellent memories. They remember places where they had tasty meals. Somehow, they recall how to get there and the timing for ripe or available food. Mother bears spend the cubs’ first summer teaching them where and what to eat—and how to escape danger. Therefore, cubs that learned about garbage dumps returned to those sites, even after they were removed. It has taken several generations to get bears once fed with human food to return to their natural habits of foraging and fishing. However today, an average of fewer than one bear-inflicted human injury and only 12 bear-caused property damages are reported each year. Like many programs that begin in Yellowstone, the bear management program spread to other national parks and forests, state parks, and numerous areas inhabited by bears. 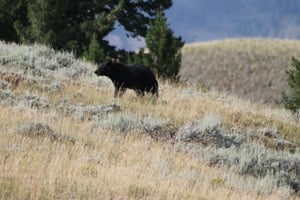 While visitors are cited today for feeding bears, many still risk their safety by encroaching on the animals—especially a sow with cubs. A black bear can weigh as much as 200 to 600 pounds. Some males reach 800 pounds. Their fur is usually black, but can be cinnamon or dark brown. Their litters often have both cinnamon and black colored cubs. Most black bears are actually shy and solitary. The bears choose their territories, which depending on food sources, could be as small as three-square miles, or as large as 10 square miles. Yet, they prefer to roam and wander within their home range, perhaps sleeping in a different place each night. While foraging or ambling across a clearing, they look lovable—and harmless. They are naturally peaceful, but they may attack if they are surprised. A mama bear will fight off any predator—human or animal—that threatens her cubs. An angry bear lowers its head and stares at its enemy with its ears flat back. Then the bear slaps the ground with its paws and clicks its teeth before charging. Although a bear appears heavy and slow-moving, black bears can run in spurts up to 30 miles per hour—as fast as a horse, and much faster than a human.

Do not provoke a bear by invading its territory. Forego that perfect photo to keep a safe distance. Always go into woods or meadows that bears inhabit with a can of bear spray at the ready. Make noise as you hike, warning the bear that you are there. However, it you surprise a bear, do not run. Stand still. Do not stare at the bear’s eyes. If the bear continues aggressively toward you, use the bear spray. Often a fog between you and the bear will turn him or her back. If not—drop to your knees and bend to cover your head with your arms. Remember that the bear is protecting its range. Likely when he or she feels the threat has passed, the bear will return to foraging.

Our national parks and forests have habitats that will never be destroyed. Bears living there will always have good home ranges. We are their visitors—fortunate to see them even at a distance. Respect them. Admire them. Take photos with a long range lens. But save that close and cuddly encounter for the teddy bears you have at home.