You are here: Home / New RV Products and Gear / The 15 Best Portable Coolers To Chill Your Drinks
This post may contain affiliate links or mention our own products, please check out our disclosure policy here.

When you’re out camping on a hot summer day, you’ll be glad to have a portable cooler to keep your food and drinks cold.  We shopped around and found the best coolers to either fill with ice or plug into your vehicle’s 12-volt outlet.

The Roadie is the smallest cooler in YETI’s popular Tundra line. You can hold up to fourteen 12-ounce cans in this heavy-duty cooler with ice (they recommend a 2:1 ice-to-contents ratio). 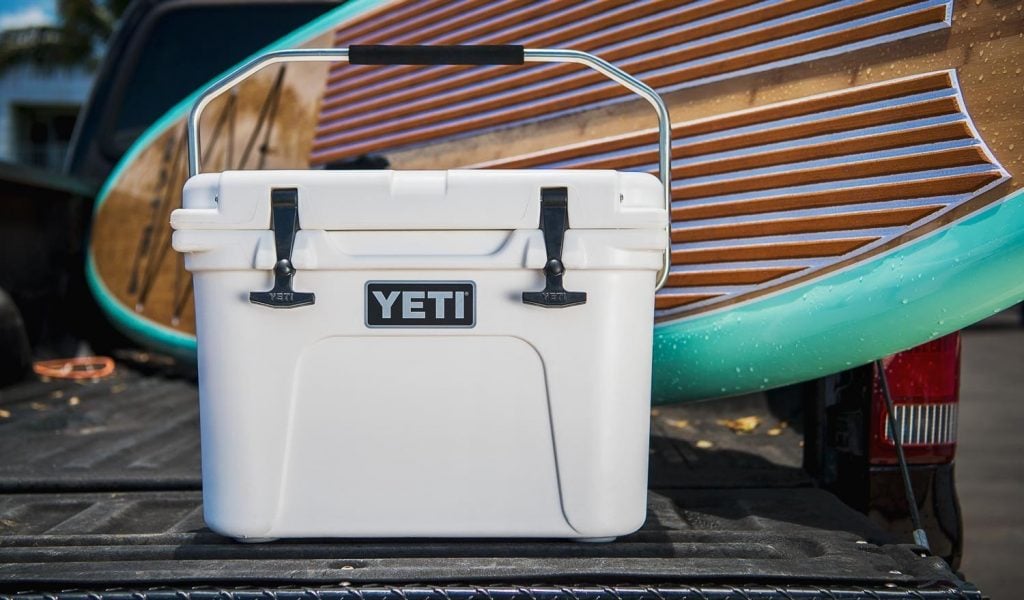 The durable construction makes it heavier than other coolers, but it’s tough as nails and will keep your ice solid for days.  It’s also made with rubber latches on the front and a padded steel handle for easy carrying. $150, Amazon

YETI’s soft-sided coolers are more lightweight and portable.  Their Hopper Two holds up to six cans with ice and is designed with a tough fabric and zipper that are both water and leakproof. 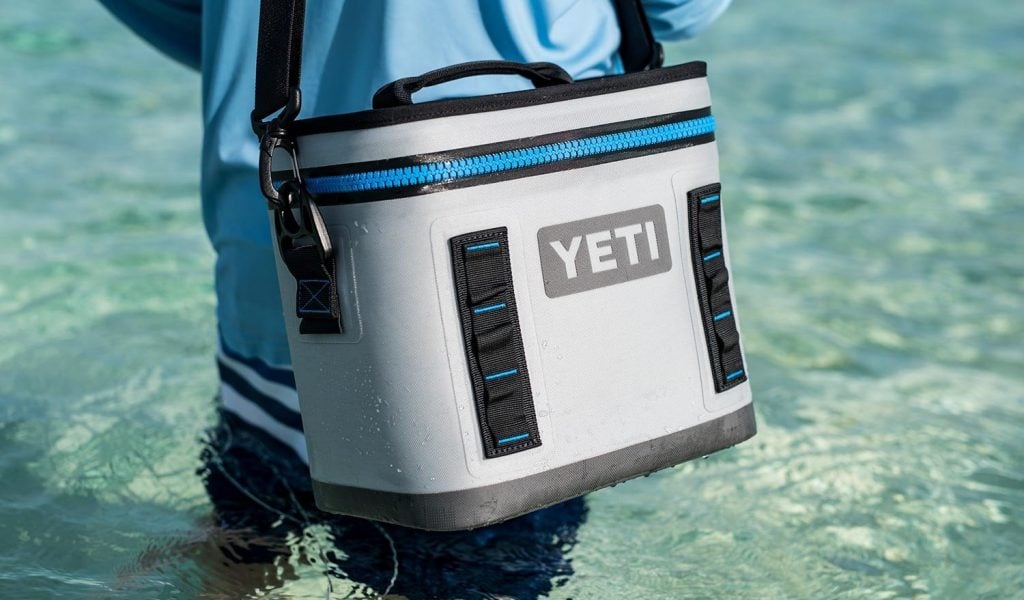 The personal cooler also comes with a shoulder strap that can be detached.  $350, Amazon

Coleman’s steel-belted cooler has a simple retro design that will take you back to the 1950s. This 54-quart cooler holds up to 85 cans and has its own built-in bottle opener on the side. 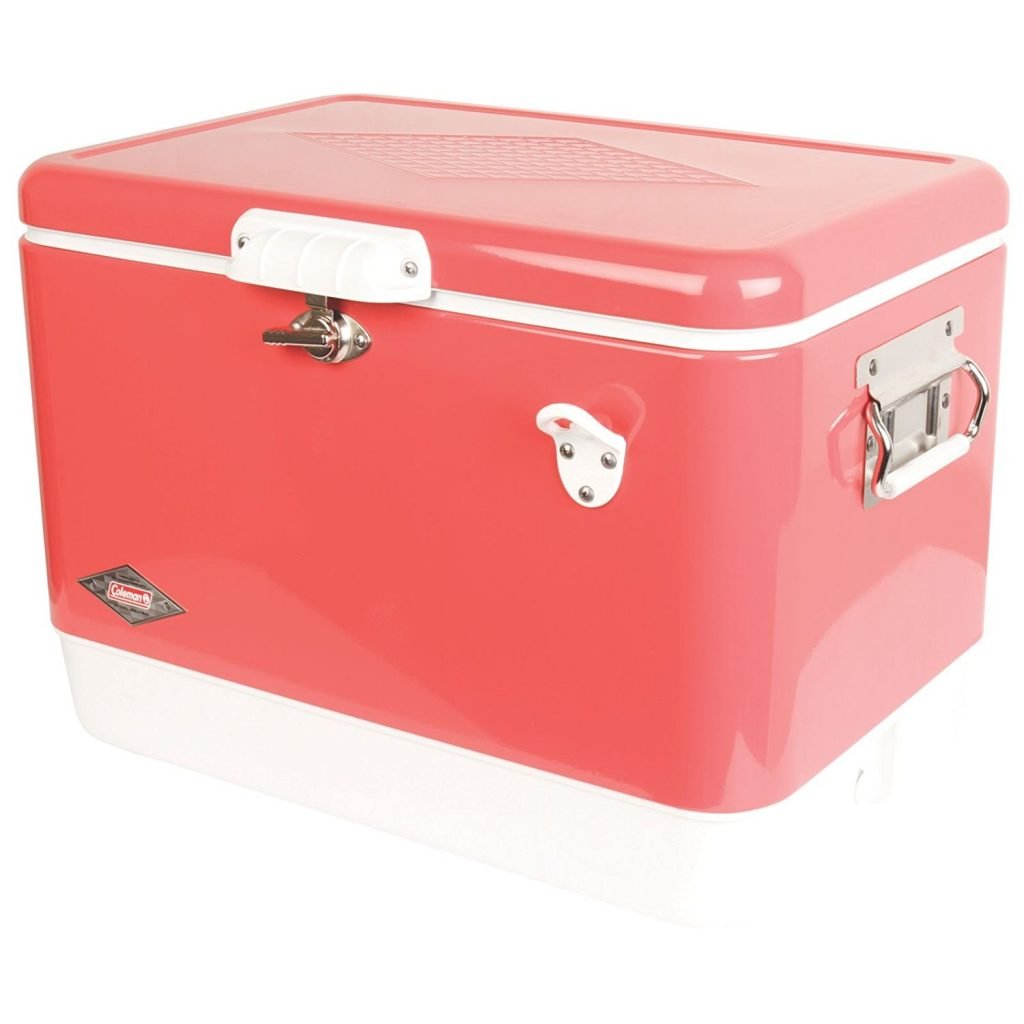 The insulation keeps ice for about four days in temperatures up to 90 degrees F.

The Coleman coolers are offered in a variety of colors including Rose Pink (as pictured), Black, Stainless Steel, Green, and Turquoise. $137, Amazon

If you don’t want to worry about the hassle of buying ice or just want more room for food and drinks, you might prefer a thermoelectric cooler like the Powerchill from Coleman ($106).  It simply plugs into your vehicle’s 12-volt outlet to keep the contents cold. 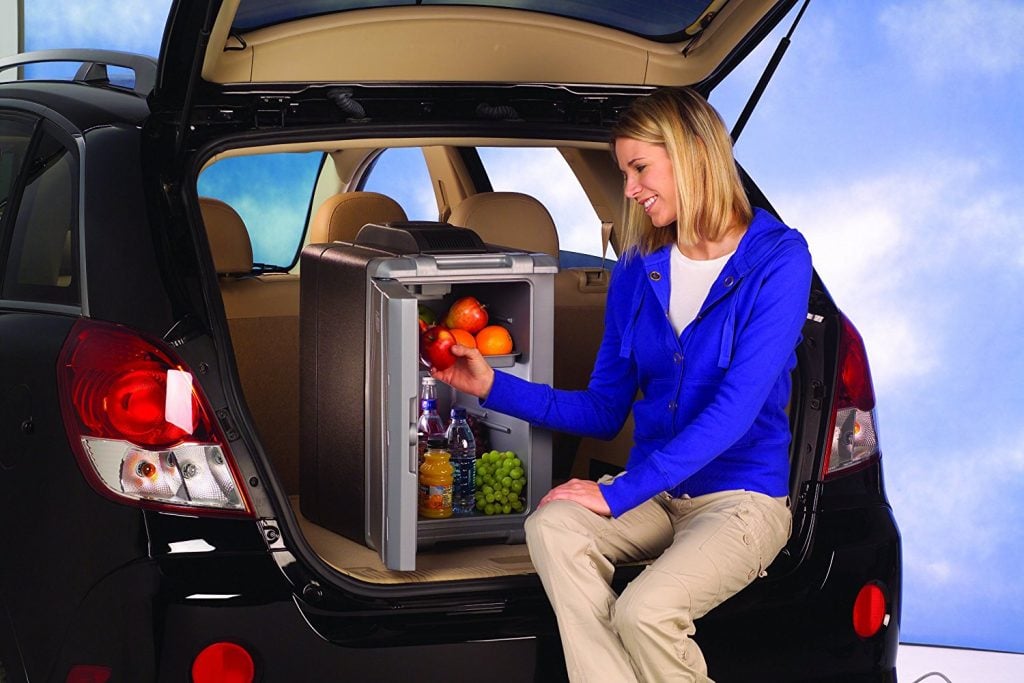 The cooler can stand up like a mini fridge and has a tray shelf to keep everything nice and organized.  At 40 quarts large, the Powerchill can store about 44 cans along with some small snacks.

Coleman also makes a 40-quart Hot/Cold PowerChill that doubles as a cooler and a food warmer.

Wheeled coolers, much like suitcases, are easier to transport no matter how much you load in them. This Wheeled Cooler from Coleman holds up to 42 cans and has a telescoping handle that can be pulled effortlessly. 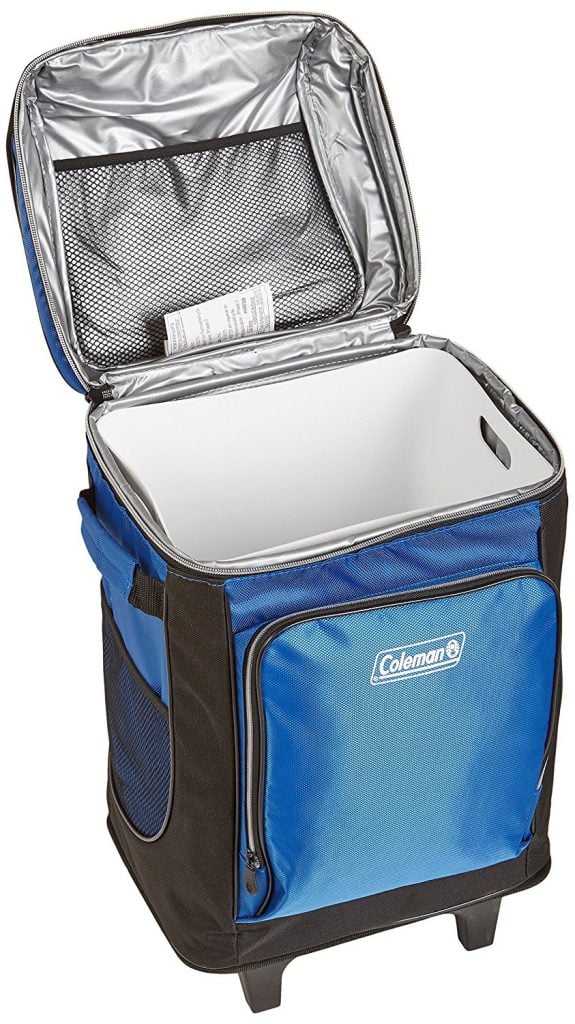 You can also store small snacks in the cooler’s front zippered pocket, side mesh pockets, mesh pocket on the top inside, and under the bungees on the lid.

A removable hard plastic liner is also included with the wheeled cooler.  When put in place, this handy liner keeps all of your melted ice contained.  About $45 on Amazon

A backpack cooler can be useful if you’re going hiking or on a day trip and want to save money by bringing your own food. 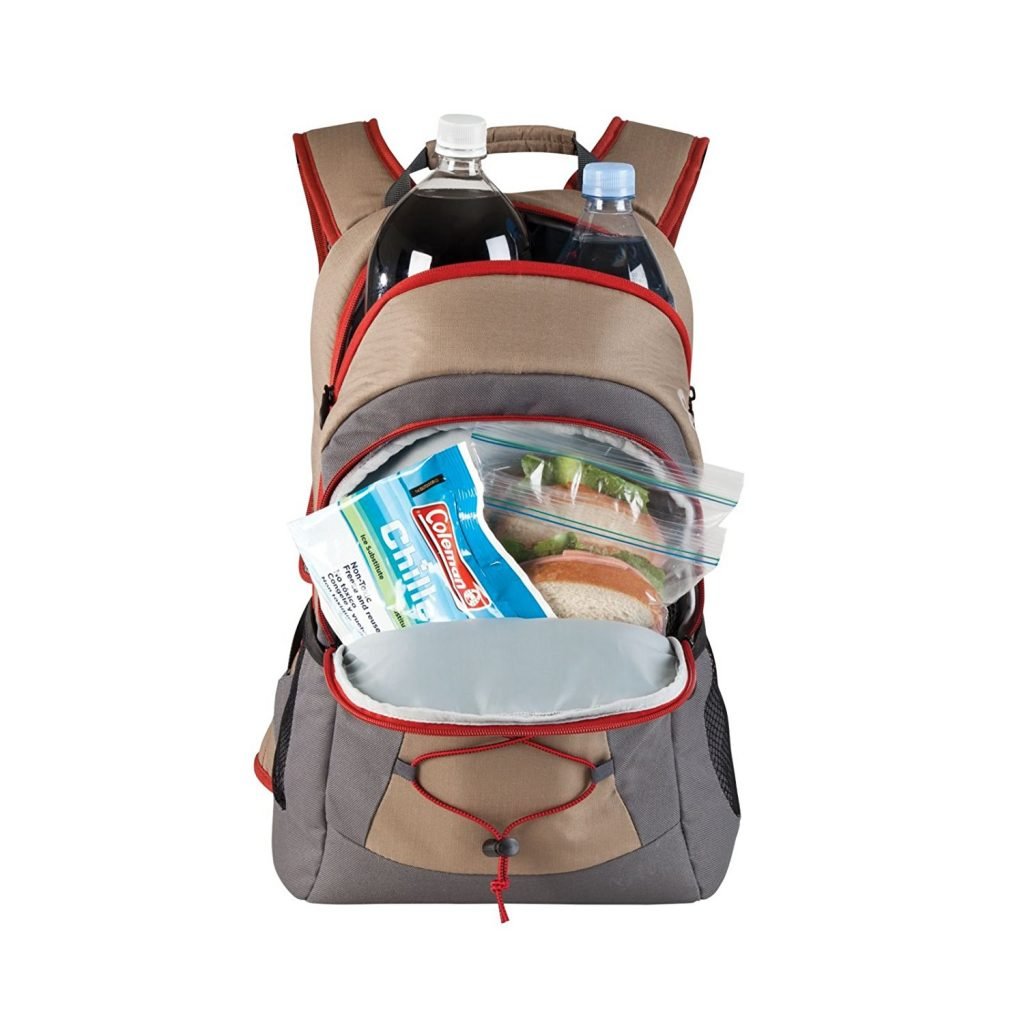 The Backpack Cooler looks and feels like a real backpack and keeps up to 28 cans well-insulated.  It’s designed with padded shoulder straps and straps that go around your waist to evenly distribute the weight.

It also has side pockets for water bottles and a large front pocket where you can store other items like your phone, wallet, and keys. About $24, Amazon

You can plug this dual cooler/warmer from Wagan ($89) into any 12-volt outlet to keep drinks cold or to warm up food. 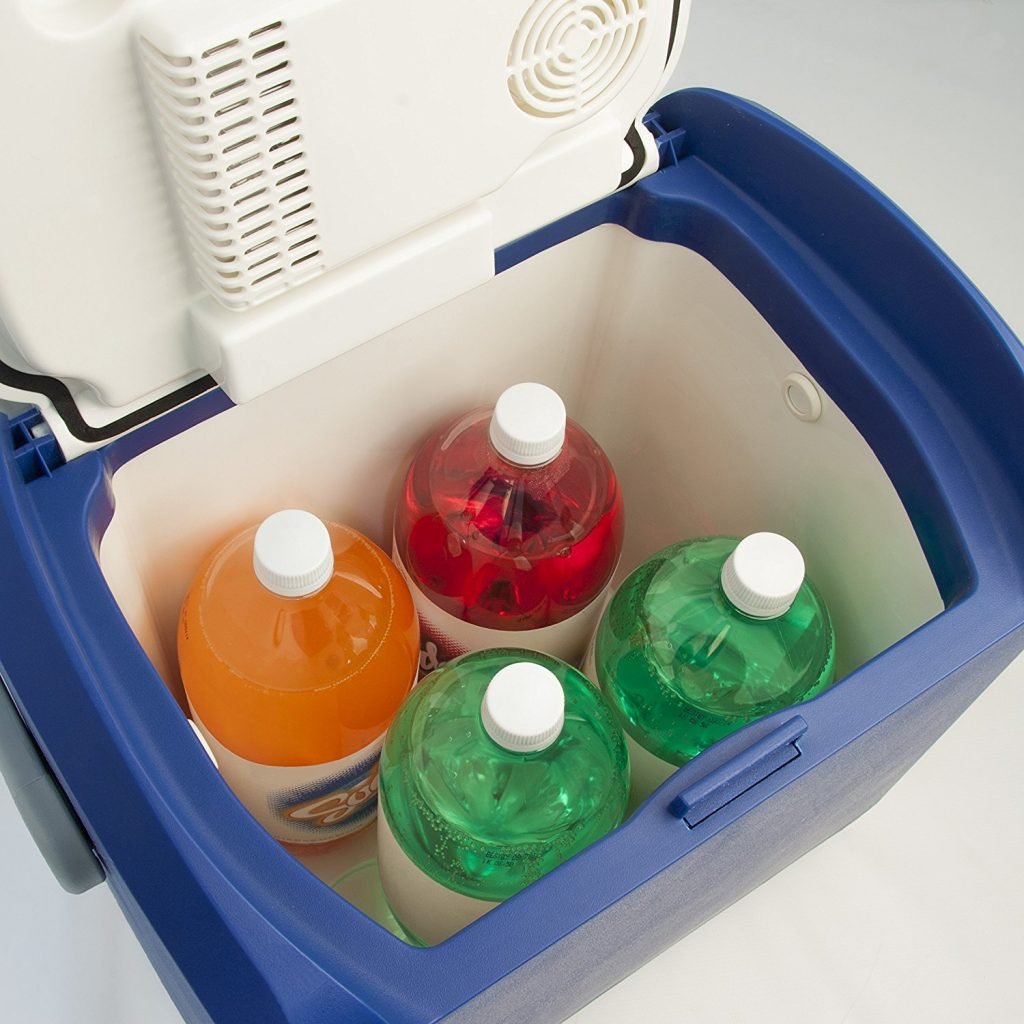 It has enough room to hold four 2-liters, a couple of wine bottles, or 27 cans. The cooler/warmer fits perfectly behind seats and is easy to carry with its folding handle.

Wagan also sells an adapter separately if you want to plug the unit into a standard 110-volt wall outlet.

Koolatron’s slim electric cooler fits between seats in most small cars and SUVs. Like the Wagan cooler, it plugs into any 12-volt outlet or standard wall outlet with an adapter (sold separately). 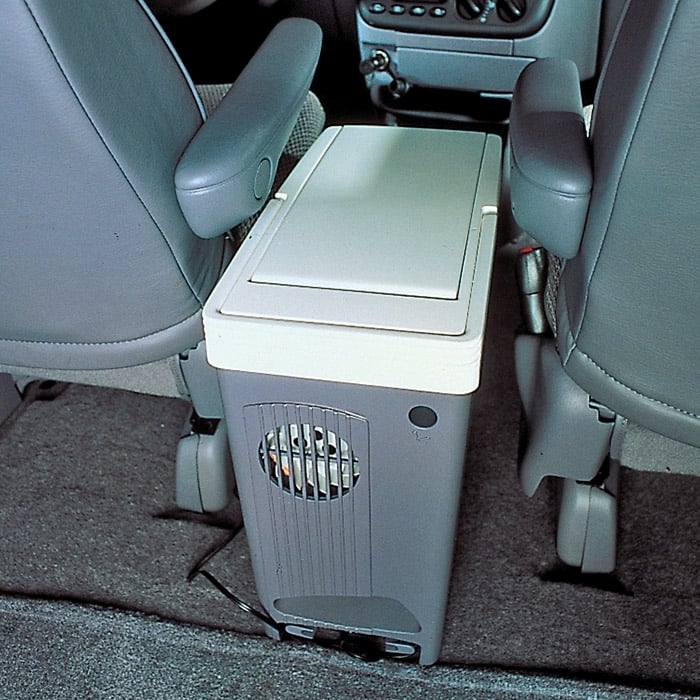 The coolers will keep your drinks 40 degrees F cooler than the outside temperature.  You can optionally reverse the plug and use the units as warmers to heat food up to 130 degrees F.

The lid can easily be opened one-handed and has a folding handle that makes carrying it outside a breeze.  Take them camping, tailgating, or on your next picnic. $96 on Amazon

The popular Igloo brand’s Iceless Thermoelectric Cooler is both lightweight and portable.  It comes with an 8-foot long cord that plugs into any vehicle’s cigarette lighter. 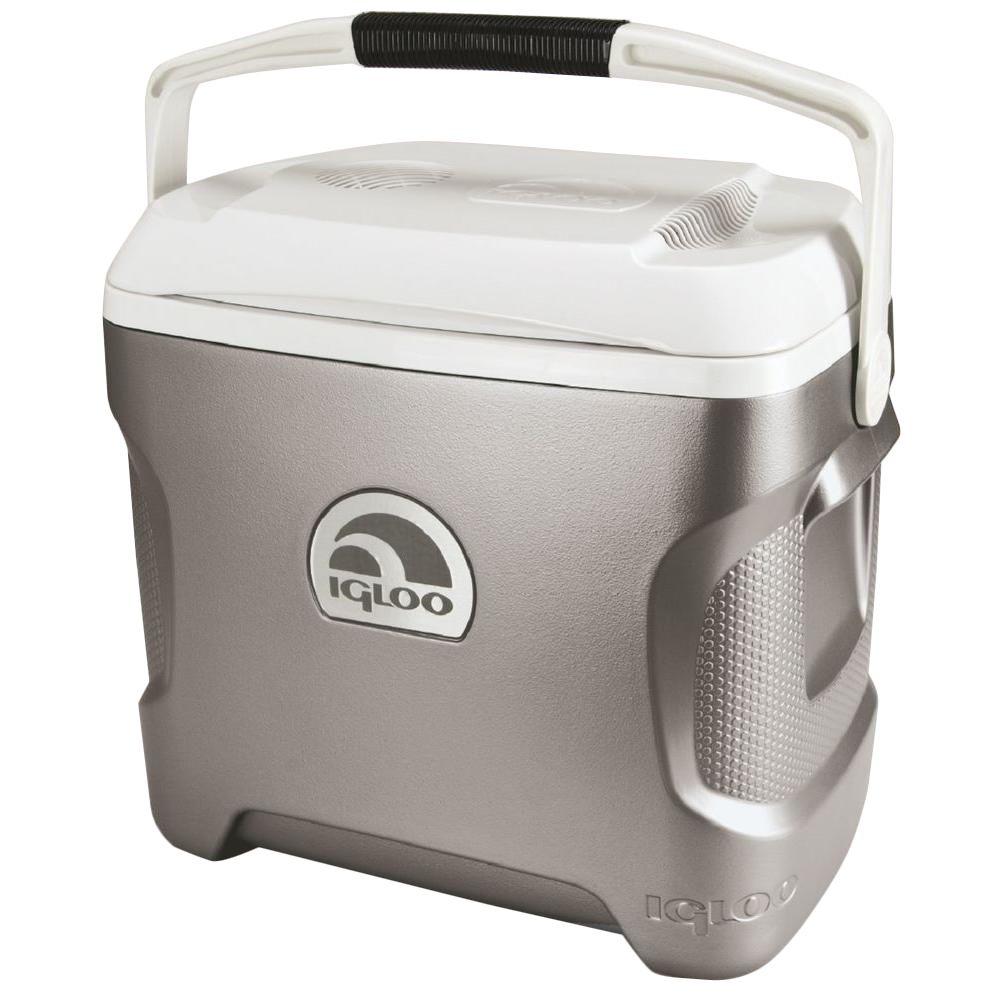 They’re designed with a quiet fan to keep beverages chilled and a carrying handle that swings up.  The 28-quart coolers are available from Walmart.

Black & Decker’s Cooler and Warmer has a more unique design than other iceless coolers. This portable cooler/warmer sports two cup holders, room for 12 cans, and a zippered side pouch. 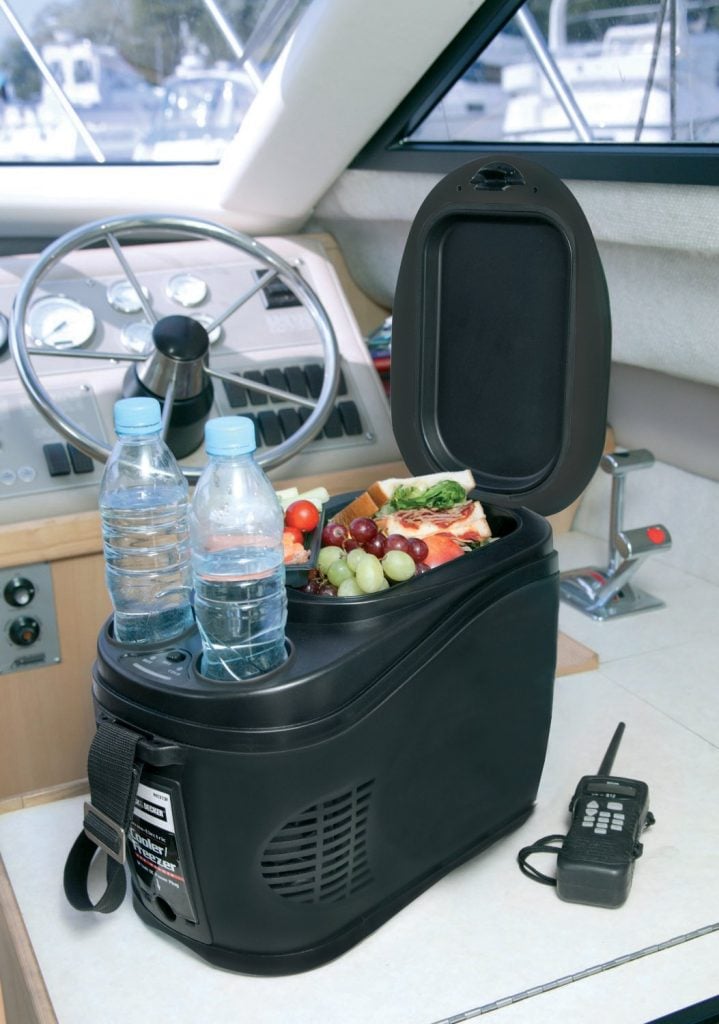 You can plug the unit into your 12-volt outlet and set it upright on your seats, tailgate, or floor. The inside cools down to 40 degrees below the outside temperature or heats food up to 120 degrees F.

What sets eBays Crew Cooler apart from other soft-sided coolers is its simple yet functional design. 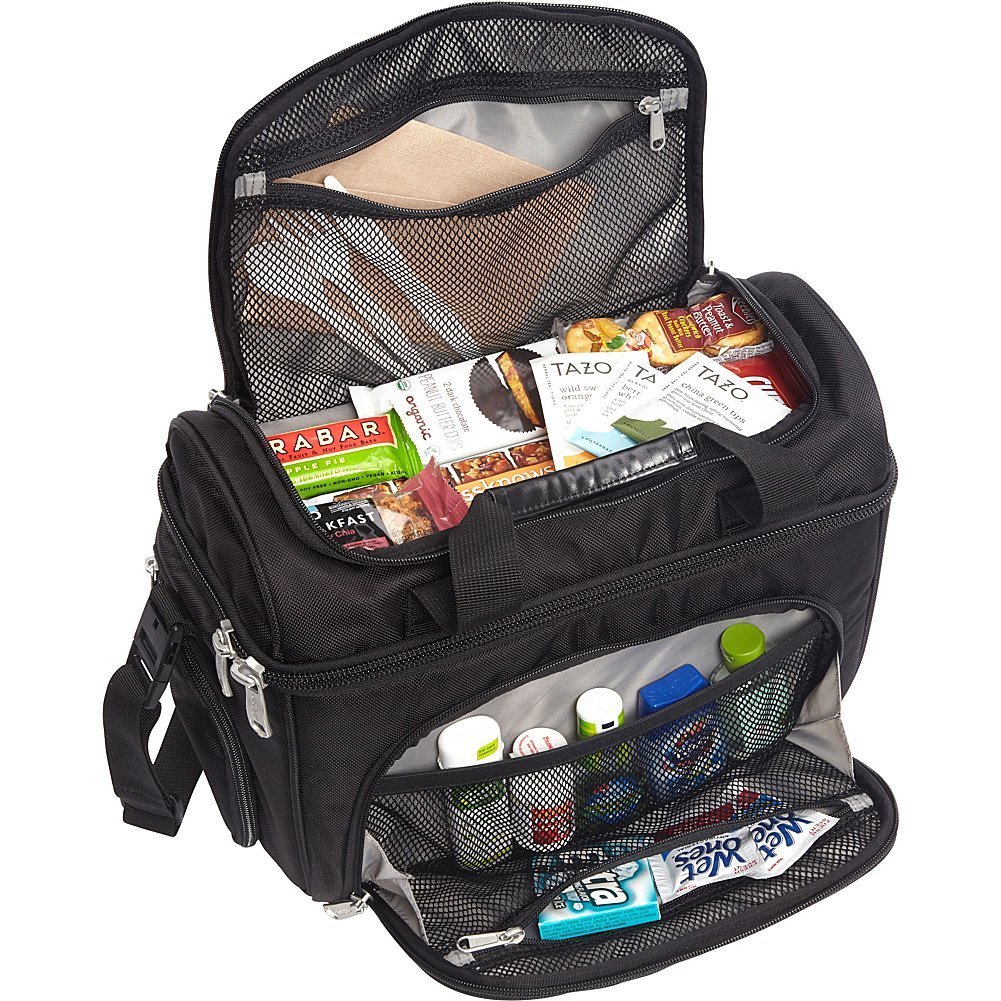 The bottom cold compartment is insulated on all six sides and the many zippered compartments can be stuffed with other items.

They’re offered in a variety of colors—you can get the cooler bag in Pitch Black, Sinful Red, Brushed Indigo, Blue Yonder, Eggplant, or Grey Matter for $55 on Amazon.  They also make a smaller Junior version for $37.

The Tundra cooler is much larger than the Roadie (listed above) but like all YETI products, it is built to last.  Their Tundra is made in a range of sizes from 35-quart (holding about 20 cans) up to 75-quart and 105-quart, and comes in White, Ice Blue, and Desert Tan. 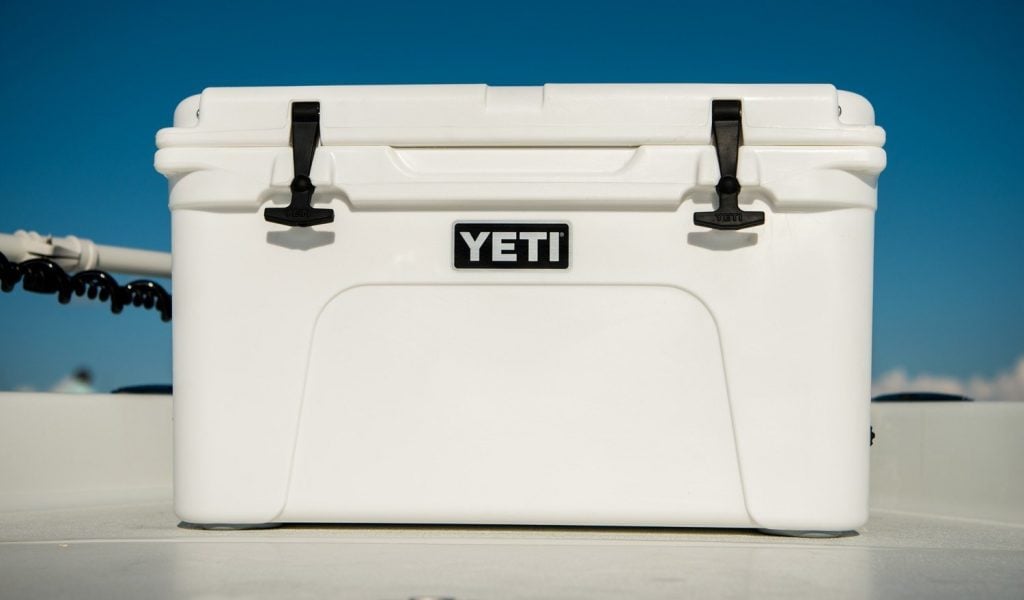 YETI’s durable rotomolded construction and heavy-duty rubber lid hatches make the cooler not only last longer but also bear-resistant.  Ice also stays frozen for two or three times as long in these large YETI coolers than many other brands.

You can fill any bucket with ice and fill it with drinks, however, YETI’s Bucket Cooler will keep that ice frozen for a much longer trip. 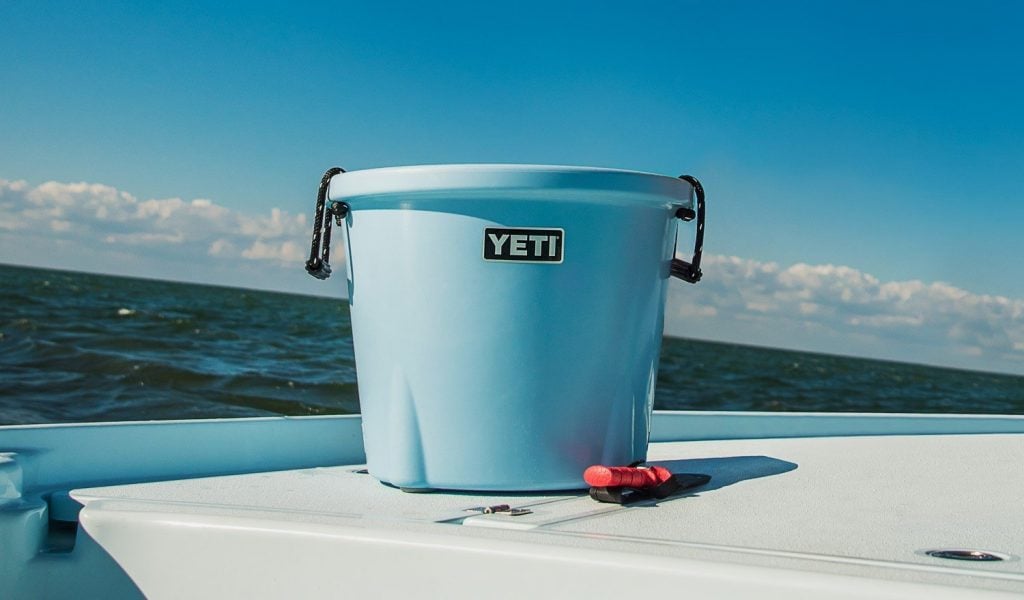 They have two sturdy handles and can hold about 52 cans with ice.  Take them out tailgating, on picnics, boating trips, fishing, or when you’re just relaxing by the beach. $200 on Amazon

Pelican’s heavy-duty coolers are similar to YETI’s Tundra line, but with more features like a leakproof plug to drain the melted ice and their own built-in bottle opener. 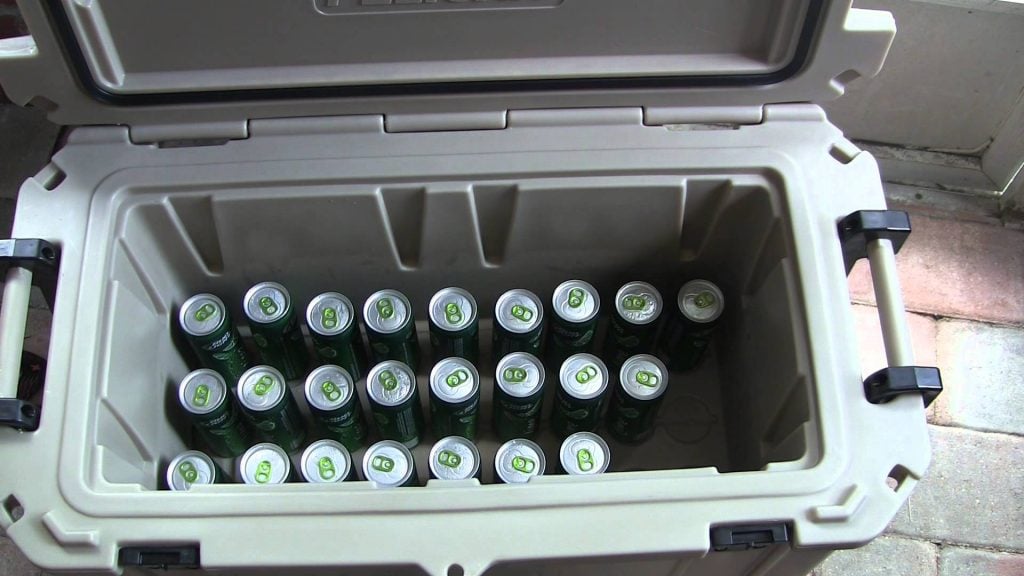 They’re made with two inches of insulation and a freezer-grade seal to keep your ice from melting for up to ten days.  The coolers also have locking hatches, tie-down slots, and four cup holders on the top.

You can find the coolers in a range of sizes from 30-quart ($230) to 70-quart ($360) and in several color combinations including White/Gray, Seafoam Blue, Gray/Green, Tan/Orange, Brown/Tan and more.

Much like Igloo’s portable Thermoelectric Cooler listed above, their 40-quart cooler will chill your food and drinks without ice—but on a much larger scale. 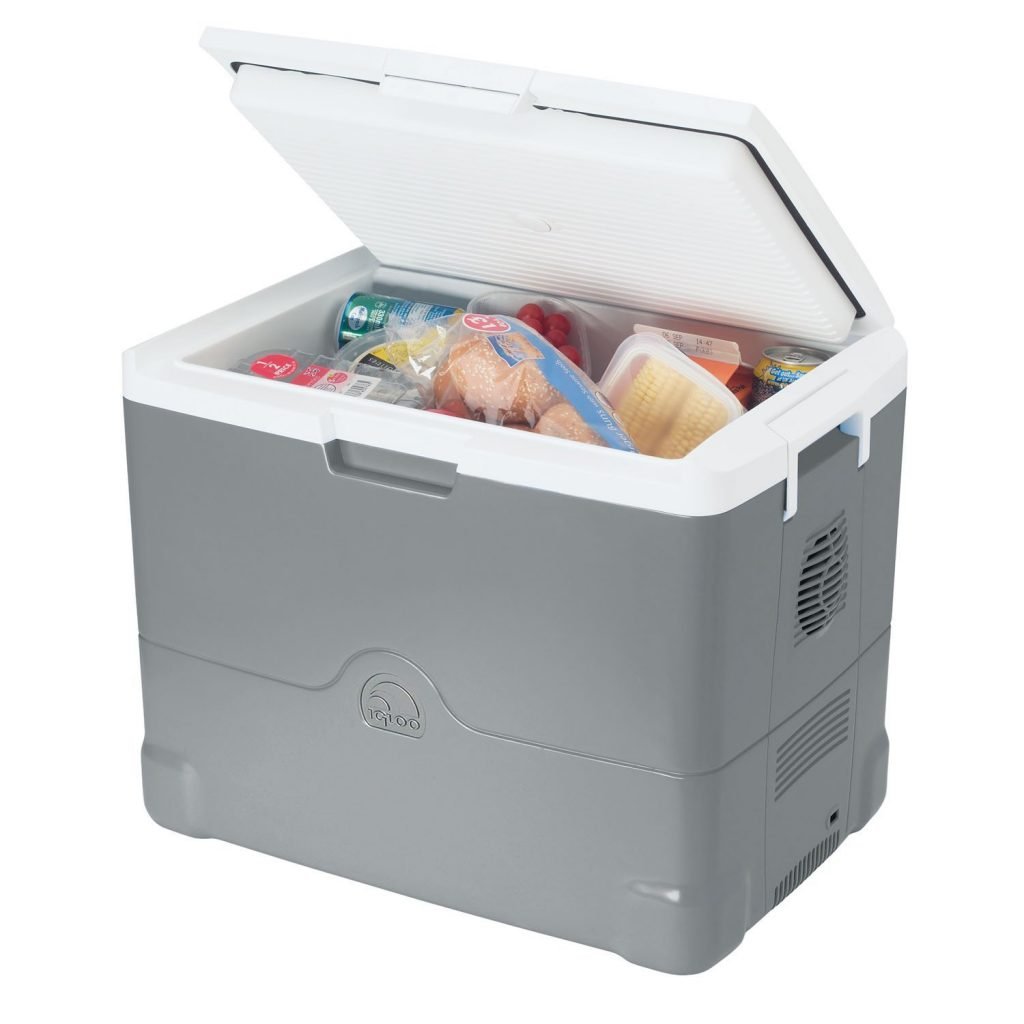 It can plug into your vehicle’s 12-volt outlet or any 110-volt wall outlet with the included converter and cool your drinks 38 degrees below the ambient temperature.  They can either be used as an ice chest or set upright like a mini-fridge.  $153 on Amazon

You may also like The 10 Best Portable Grills For Barbecuing

Nikki is a writer and editor for Do It Yourself RV, RV LIFE, and Camper Report. She is based on the Oregon Coast and has traveled all over the Pacific Northwest. Visit her Linktree at linktr.ee/nikkicleveland.

Nikki is a writer and editor for Do It Yourself RV, RV LIFE, and Camper Report. She is based on the Oregon Coast and has traveled all over the Pacific Northwest. Visit her Linktree at linktr.ee/nikkicleveland.