You are here: Home / Top Stories / Big Bend—The Uncrowded National Park
This post may contain affiliate links or mention our own products, please check out our disclosure policy here. 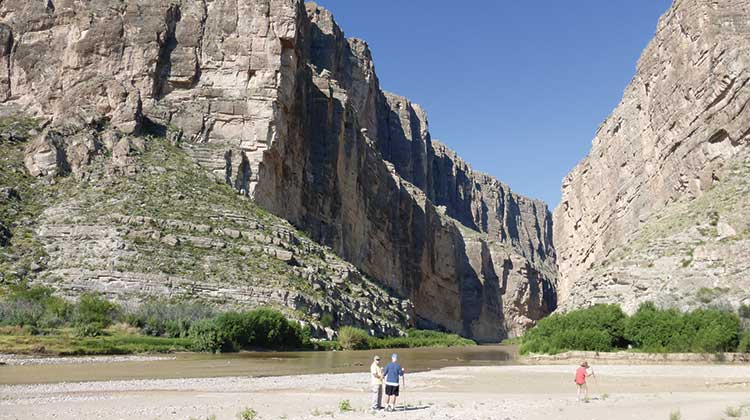 Bordering 118 miles of the Rio Grande River in southwest Texas is one of America’s most isolated and strikingly beautiful national parks. The mountain and desert landscapes at Big Bend National Park are simply stunning.

Big Bend was originally a Texas state park, but Congress moved to make it a national park by giving authorization in 1935. The initial plan was to establish an international park with Mexico, similar to Waterton-Glacier International Peace Park on the U.S./Canadian border. That idea failed to gain traction, however, and Big Ben officially opened as a national park in 1944.

Those who led the effort to establish the national park hoped the designation would stimulate tourism and economic activity in this sparsely populated area. Big Bend is quite remote and not on the way to anywhere else, so it typically attracts travelers who make the park their primary destination. Thus, visitation has tended to be relatively light for a major national park, and neighboring towns remain small.

The nearest town of any size—Alpine, with a population of a little over 6,000—is approximately 100 miles from Big Bend’s main visitor center. The nearest major town, Del Rio, is over 200 miles distant. Big Bend is about the same size as California’s Yosemite National Park, but has only 10 percent as many visitors. For us, the isolation and relatively light visitation have always been a major plus of visiting Big Bend.

Although a large portion of the park is desert, Big Bend includes rugged mountains and river-carved canyons. With elevations that range from 1,800 to 8,000 feet, the park serves as home to a great diversity of plant and animal life including 1,200 species of plants, 450 species of birds, and 3,600 species of insects. Big Bend is one of the country’s most popular destinations for birders, especially during spring migrations. 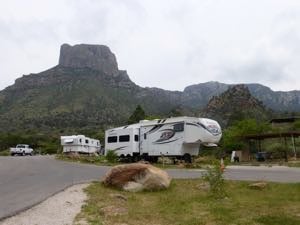 The wide range of elevations not only facilitates a diversity of plant and animal life, but also benefits visitors who can choose to spend more time at lower elevations during winter and at higher elevations during the hot summers. One of the park’s main activity centers, Chisos Basin, home to the park’s only lodging facility along with a major campground, is at an elevation of 5,400 feet, resulting in relatively comfortable temperatures during the summer months. During winter, when higher elevations can be cold and subject to snow, locations near the river at 1,800 to 2,000 feet are often quite comfortable.

What to Do in Big Bend

Big Bend is a nature lover’s paradise, especially for hikers who can choose from over 150 miles of trails, ranging from strenuous to easy. Hike in the mountains, the desert, or along switchbacks that overlook the Rio Grande before descending to the riverbank.

The park is equally inviting for those who love the adventure and solitude of back roads in a four-wheel-drive vehicle. Big Bend is the 15th largest national park, covering 800,000 acres. Primitive dirt roads of various distances include 51-mile River Road that transverses the southern end of the park along the Rio Grande. This drive is essentially an all-day adventure.

If you don’t have a four-wheel-drive vehicle or don’t want to tour the back roads on your own, consider scheduling a tour with Big Bend Overland Tours. The firm offers several tour itineraries that range from five hours to all day. The five-hour Santa Elena Loop Tour includes what is probably the park’s most impressive vista: Santa Elena Canyon. We took our first private tour of Big Bend during our most recent visit and found it very rewarding. (Call 800-848-2363 for information and reservations.)

One activity that shouldn’t be missed is crossing into Mexico at Big Bend’s port of entry. This involves a trip across the Rio Grande in a rowboat, followed by a mile-long ride on a burro or horse to the small Mexican village of Boquillas. (See the accompanying story.) 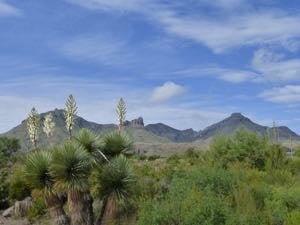 Big Bend has three main activity areas, Rio Grande Village, Castolon and Chisos Basin. The first two are at opposite ends of the park at low elevations near the Rio Grande River, while Chisos Basin is higher and surrounded by mountains. Each location has a campground. Chisos Basin, home to Chisos Mountains Lodge, is the most developed, with a restaurant and U.S. Post Office. Park headquarters and the main visitor center are at Panther Junction, which is on the main road into the park and is more or less equidistant from the three activity areas. Gasoline is available here and at Rio Grande Village.

Our favorite campground is Cottonwood in the Castolon area. Cottonwood has 24 sites, many of which are shaded, with pit toilets, water, grills and picnic tables. On the downside for RVers, there is no dump station, no hookups, and generators are not permitted.

Chisos Basin Campground has 60 sites, along with flush toilets, water, grills, picnic tables and a dump station. Like Cottonwood, there are no hookups. RVs longer than 24 feet are not recommended because of the narrow, winding road to the Basin. On the plus side, the campground is at 5,000 feet and offers a cooler stay. It is also within hiking distance of the lodge restaurant.

Rio Grande Village Campground offers a 100-site area without hookups, but there is a nearby RV park with full hookups for approximately 25 rigs. The RV park is essentially a large parking lot with a wooded area along one side. This area is operated by a private concessionaire rather than the National Park Service. A small store with limited groceries is located between the two camping areas.

David and Kay Scott are authors of “Complete Guide to the National Park Lodges” (Globe Pequot). They can be reached at valdosta.edu/~dlscott/Scott

Interested in more things to do while in the area? Check out our “Rowing Across the Border” article, https://rvlife.com/rowing-across-the-border/

Season: The park, lodging, and campgrounds are open year-round. The RV park begins getting busy during Thanksgiving and remains in high season until mid April.

Campgrounds: The National Park Service campgrounds have a limited number of campsites available for reservations between Nov. 15 and April 15, but most campsites are first-come, first-served. Information is available at nps.gov.bibe. The privately operated RV park accepts reservations at (877) 386-4383.

Lodging: Chisos Mountains Lodge offers 72 guest rooms in a series of motel-type units, motor-lodge units and cottages. Rates range from $134 to $154 per night. For information and reservations call (877) 386-4383.

Cost: Entrance into the park is $20 per vehicle for a seven-day pass. Individuals with federal land passes enter free. Developed campgrounds are $14 per night, while the RV park is $35 per night. Holders of applicable passes pay half-price at the campgrounds, but discounts do not apply in the RV park.