You are here: Home / Columns / On the Road for Good / Bigger Not Always Better
This post may contain affiliate links or mention our own products, please check out our disclosure policy here. 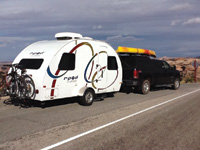 Choosing the type of RV to buy for your first year on the road isn’t a one-size-fits-all decision. Some full-time RVers begin in a 40-foot motorhome, or maybe a large fifth-wheel trailer. Yet others are more cautious and buy something small to avoid spending too much money on a lifestyle they’re unsure about. My husband and I fell into that second category when we squeezed all our stuff and an 80-pound German shepherd into a 24-foot Arctic Fox fifth wheel. Living small wasn’t always easy and sometimes I questioned our sanity. However once we met Keith and Felicia Pulaski, I felt so much better; I figured if we were crazy, then these two were certifiably nuts: they kicked off their full-timing journey in an 18-foot trailer!

Many couples couldn’t fathom even one week of camping in a trailer that size, but for these two high school sweethearts from Lufkin, Texas, the close quarters worked out great. A compact RV simply meant they had to be more flexible and learn how to do everyday things a little differently. “The small space never seemed to be much of a problem,” says Felicia. For example, “We learned that when one of us was standing up doing something, the other had to be sitting down.”

Keith and Felicia’s first full-time home on wheels was a brand-new 2011 Forest River R-POD 171, which they originally purchased just for short camping trips. “Since we were not thinking about full-timing then and wanted to stay with something small and light, this RV had everything we needed,” said Felicia. After picking it up at the factory in Goshen, Indiana, they were set to travel, with a large SUV towing the little R-POD and all the basics of home: a place to sleep, eat and shower. Although they could never have two cooks in the kitchen at the same time, it was the perfect RV to shuttle them to the kinds of back-country hiking, kayaking and biking excursions they enjoy. 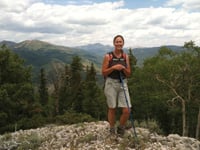 With the kids out of the house and a hard-earned early retirement from careers (she as a nurse and he as a public works director), 53-year old Keith and Felicia were having a ball traveling with the tiny trailer. Their excursions went in length from one month, to three, and then to five, until Felicia recalls, “We looked at each other and said “Why can’t we just RV?”

It was a magical light bulb moment. “We enjoyed being on the road more than we enjoyed being in a house,” says Felicia. “Every time we left on a trip we stayed away longer and longer and did not look forward to going back home. We had no real responsibilities to keep us tied down.” After that realization, the couple sold all of their possessions and became official full-timers in May 2012.

As they moseyed from one adventure to another while occasionally workamping for the U.S. Forest Service, they discovered that living in the small trailer was especially fun because they could go to many places where larger RVs could not. “We could camp anywhere and turn it around on a dime,” Felicia recalls fondly. The tiny RV meant they never had to settle for less than the most rugged, off-the-beaten-path destinations; however, once they got there, the weather was usually a deciding factor that determined how long they would actually stay.

“The biggest challenge of living in the R-POD was staying warm when it was cold outside, which is a big deal for me,” says Felicia. “We didn’t realize there was such a big difference between a three-season and a four-season RV. And after that, we decided it would be nice to have a couch.”

As they pondered the pleasures of couch surfing in the wilderness, they realized that the tiny RV had taught them valuable lessons about living with less and rediscovering what you truly need in life. “It taught us that we didn’t need much,” she recalls. With their traditional sticks-and-bricks life behind them for good and a hankerin’ for a real couch, the couple now knew exactly what their long-term full-timing happiness required: a four-season, 2014 Arctic Fox 25W trailer.

“We wanted to be able to camp in all kinds of weather and be comfortable,” says Felicia. “Keith did a lot of research on four-season RVs and their construction and decided that this was the brand we should go with. I fell in love with the floor plan and room in this one. We were not planning on buying a new RV when we went to look, but we had a great salesman!” 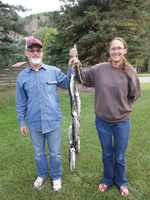 In addition to room for them to stand up at the same time, their new home has many other comforts their previous one lacked, including a walk-around queen bed, a sofa, a dinette and ample kitchen counter space. “We are very happy with our purchase of this RV. It is warm! We have a couch for us that makes into a full bed for the grandkids. We can both stand up at the same time and have even had two cooks in the kitchen!” says Felicia.

Making Choices
As this couple found, rediscovering life’s little pleasures we usually take for granted—like a couch—is a joyful experience when you’ve gone without for a while. If you’re trying to decide which kind of first full-time RV to buy, consider this: moving into your first full-time RV should be comfortable, but it should also give you a new opportunity to discover things about yourself and learn what makes you happiest. Doing so is far easier when you eliminate the excess material things that occupy too much space in your life. Keith and Felicia’s experience is proof that taking baby steps into the full-time lifestyle can help you decide on essentials for your long-term comfort.

“I think it goes without saying that you don’t know what you want or need in an RV until you get on the road,” says Felicia. “So, I would suggest for people who are thinking about the RV lifestyle to buy smaller than they think they need and buy used, if at all possible. We feel that the success of full-timing for us came from starting out part-timing: making sure we enjoyed being on the road, not having a home-base, being away from family and could endure being with each other 24/7, 365 days a year.”

Full-time RVing isn’t always a picnic, but after talking to these two, it seems like a given that any couple who can enjoy living two years in a 18-foot trailer can survive whatever the future brings, don’t you agree?

If your first RV was as unconventional as this couple’s, let me know; I would love to hear about it.

Rene Agredano is a full-time RVer who works from the road as a writer, jewelry designer and advocate for special needs animals. This time of year you’ll find her with other winter boondockers in the Southwestern desert, along with her husband, Jim Nelson, and three-legged German shepherd, Wyatt Ray. Follow her full-timing travels at LiveWorkDream.com and her blog, “The Full-Timing Nomad” at rvlife.com.