You are here: Home / Top Stories / Bodie’s Wicked Ways
This post may contain affiliate links or mention our own products, please check out our disclosure policy here. 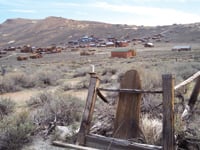 When a little girl writes in her diary, “Goodbye God, I’m going to Bodie,” you know her destination isn’t a pleasant one—not in the 1880s anyway when she penned that entry. The child’s name is unknown, but her words were quite suitable for describing her family’s move to Bodie, California—once known as the Wildest Mining Camp in the West. Today, the lawlessness is long gone. Now a state historic park, Bodie is the nation’s biggest unreconstructed ghost town, and provides an authentic look back into California’s mining history.

Founded in 1859, the town was named for the man who first discovered gold in the area, Waterman S. Bodey (also known as William S. Bodey). The discovery presented an opportunity for hard-rock miners to strike it rich. The chance to make a fortune was so appealing to so many that gold seekers continued to rush here in the late 1870s even though robberies, murders and street fights were occurring nearly every day. Story has it that the fire bell tolled the ages of the deceased when they were buried; this town’s bell rang often and long!

The weather in Bodie was just as bad as the crime. In fact, the weather killed the town’s namesake. While returning with supplies, Bodey died in a snowstorm the same year the town was established. The winters here haven’t changed much and are still beyond inhospitable. With winds up to 100 miles per hour, temperatures dropping to 30 degrees below zero, and snow 20 feet deep, Bodie is the coldest spot in the United States outside of Alaska. Because it is perched at an elevation of 8,379 feet, it’s often cold and windy in summer, too. Be prepared for any weather when you visit. 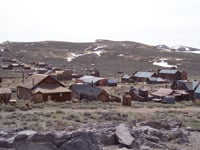 From about 1877 through the 1880s, this gold mining town was booming and bustling. The population of miners, merchants, gamblers, entrepreneurs and their families exceeded 10,000. Some got rich. From the onset of mining through about 1941, the 30 different mining companies that operated in the Bodie Mining District produced close to $100 million in gold and silver (gold was then about $20 an ounce; silver was less than a dollar an ounce). The Standard Mine was the most profitable, yielding nearly $15 million over 25 years. It was this mine’s success that caused the 1878 rush to Bodie.

What’s left of Bodie—about 170 buildings and the Standard Mill—represents just five percent of what was standing in its heyday. There are no re-creations or restorations here. Everything is officially in a state of “arrested decay,” meaning only minimal repairs are made on the remaining structures. Some are literally falling down. Bodie has been left pretty much the way it was when the residents left— which would have been anytime up through the 1940s, when the last stragglers pulled up stakes. The town’s cemetery is still in use though, as the last of the old-time miners settle into their final resting places. 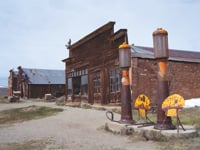 Touring Bodie today is mostly self-guided. You’re free to wander and get an up-close look at how the ravages of time and Mother Nature have affected one of the most renowned and rowdy hard-rock mining settlements of the Eastern Sierra. Pick up a walking map/brochure for $2 in the parking lot. The numbered paragraphs in the brochure correspond to numbered posts (that haven’t blown or fallen down) along the streets, and to numbers on the map.

The brochure is filled with interesting stories about some of the town’s citizens and points out where they lived. For example, James Cain came to Bodie when he was 25 years old, got rich in the lumber business, and then recovered $90,000 worth of gold in just 90 days. He eventually ended up owning the Standard Mill. Theodore Hoover, brother of President Herbert Hoover, lived in Bodie. He was the general manager of the Standard Consolidated Mining Company, and later became director of the School of Mines at Stanford University. Lottie Johl was a former “lady of the night” who achieved respectability as a painter, and became the wife of a local butcher. Pat Reddy was a one-armed lawyer with a shady reputation for defending criminals. 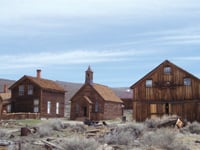 As you stroll through the streets, be sure to peek in the windows of the buildings, but leave every rustic relic as you find it. It’s against the law to remove “souvenirs.” Everywhere you look are reminders of yesteryear—tin cans, weathered wood, skeletons of cars, pieces of mining equipment, and much more. The contents of many homes and shops are still in their rightful places, but under layers of dust and dirt. The windows of the Boone Store still display toiletries, patterns for dressmaking, and faded cans of coffee and spices. Bottles still line bars in saloons, and the dinner tables in some homes are still set with dishes—just as if the owners were expected back any time. But they aren’t. Only a few park service employees live here during the summer months.

Group Tours
The one area in Bodie you cannot wander through on your own is the Standard Mill. But if you’d like to spend about an hour gaining insight into hard-rock mining, and see what Bodie was really about, join a free mill tour led by a park ranger. Group size is limited to 20, so be sure to sign up at the museum on Main Street when you arrive in town (no phone reservations). Tours are conducted several times a day during the summer. The Standard Mill building is pretty much intact, so you’ll see a mother lode of original mining relics. 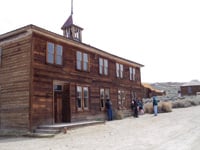 Tours begin in the metal shop where huge lathes and other metal working tools were used to repair the stamps and rods. The Standard was a 20-stamp mill that ran around the clock, six days a week. It was one of nine stamp mills in town, so the noise must have been deafening. Even on Sunday when the stamp mill didn’t run, people’s ears were probably still ringing! You’ll also see massive generators on the tour. For years, energy for the town’s mills was derived from steam generated by wood-fired boilers, but in 1892, hydroelectric power generated by a plant 13 miles away replaced the wood fuel. The enterprise was a gamble. No one knew for sure if the idea of transmitting electricity over wires from a distance would work, but it did. Bodie made engineering history!

During the tour you’ll also learn about the amalgamation process of using mercury to extract gold and silver from the pulverized rock. The end result was 120-pound ingots that were a mixture of gold and silver. This type of ingot was unique to Bodie, making it easy to track its origin. After the ingots were transported to the mint in Carson City, they were re-melted and the gold and silver was then separated.

The streets of Bodie are quiet now, except for the howling wind and chatting tourists. The town’s remaining residents cleared out when the last post office and mine closed in the 1940s. There is no longer a rush for gold or anything else. But if you enjoy seeing and learning about America’s mining history first-hand, a visit to Bodie is a must.

IF YOU GO:
Bodie State Historic Park is seven miles south of Bridgeport. From U.S. 395, take State Route 270 east 10 miles to the end of the pavement and continue on a dirt road to Bodie. The last three miles can at times be rough and reduced speeds are necessary, but the road is wide and there is plenty of RV parking at Bodie. Call the park at (760) 647-6445 or Caltrans at (800) 427-7623 for current road and weather conditions.