You are here: Home / Blog / Bonneville Salt Flats
This post may contain affiliate links or mention our own products, please check out our disclosure policy here. 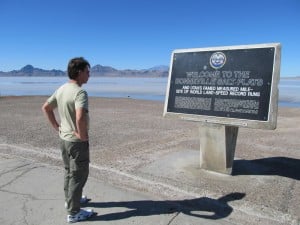 While driving on Interstate 80 in northwest Utah, you can’t help but notice the barren Bonneville Salt Flats. If you’ve never stopped for a closer look, take Exit 4 just before reaching the Nevada state line. It’s worth a stop. The flats were formed when ancient Lake Bonneville slowly evaporated and left behind a hard, white salt crust that can be up to five feet thick in the middle, tapering to about an inch on the edges. Named after an early military explorer, the flats are about 12 miles long and five miles wide. Not only does the high concentration of salt here make the terrain unique, but this is also the home of Utah’s famed measured mile and the site of world land-speed record runs. 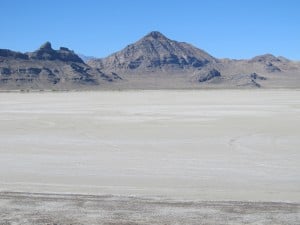 Timing of world land-speed record runs is under the jurisdiction of the United States Automobile Club. World land-speed record times represent an electronically-timed average of two runs over the measured mile within an hour time period—one run in each direction. If you’re a race fan, you might want to visit when the action is taking place, but at all other times of year, the interpretive signage explains the history and significance of the area. The first world land-speed record here was set on September 3, 1935 by Sir Malcolm Campbell. His speed was 301.13 mph. Some of today’s records set by jet and rocket engines are in excess of 600 mph! Bonneville speed trials are scheduled throughout the summer. “Speed Week” takes place mid-August, followed by “World of Speed” in September, and the “World Finals” take place early October. The events end when rains cover the area with a few inches of water, giving it the appearance of a very shallow lake. 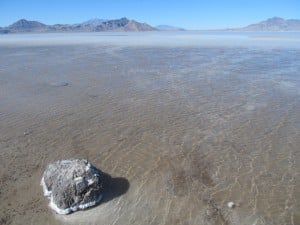 The speedway is 80 feet wide and 10 miles long with a black reference stripe down the middle. Due to the curvature of the earth, you can’t see from one end of the course to the other. Bonneville racing events are different than most— there is no side-by-side competition. Each car runs alone on the course, competing only against the official timer’s clocks. There are no grandstands. Spectators can walk through the staging lanes and pits and talk to the drivers and crews. You’ll see an amazing display of mechanical ingenuity, creativity and diversity, so bring your camera and plenty of sunscreen.

The Salt Flats are located 120 miles west of Salt Lake City, Utah. Take Exit 4 off of Interstate 80 before the state border of town of Wendover, Utah.  The 3.5 mile paved access road leading to the Salt Flats is north of I-80.  Travel on the paved road as it makes a right turn and heads east for three miles.  An informational marker is located at the end of the paved road. Travel on the Salt Flats is at your own risk and is only recommended when the surface is entirely dry. Camping is available on adjacent public lands.