You are here: Home / Maintenance, Modifications and Repairs / Bosch 51101-C Brake Caliper Recall – Done !
This post may contain affiliate links or mention our own products, please check out our disclosure policy here.

I found out through the grapevine that my service center was about to receive a number of the new Bosch Brake Calipers, so I called them and made an appointment. Wanting to clear the campaign early, Larry gave me the first available spot he had for Wednesday morning at 08:00.

Wednesday morning came not all too quickly but here we are. The motorhome was all ready to go and with crank of the starter the engine fired up and we were on the road to Myrtle Beach. I turned the radio on and sat back and enjoyed the 15 or so mile run out to Northgate Boulevard. 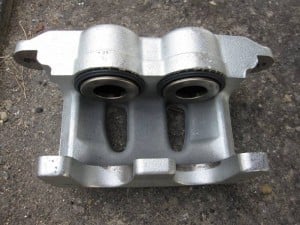 The way we came in off of Route 544 Northbound requires you to make a right hand 180° turn and an immediate left, Larry’s is right at the end of the street. One of the guys saw me coming and moved a car on the ramp and gestured that I should approach him. I was parked as most people are on the front apron.

I got out and chewed the fat for a few minutes before they got organized and started getting on my vehicle. Larry hired a helper who jacks up the vehicle and takes off the tires. Of course in my case they placed some blocks under my jacks and I was able to assist in lowering the jacks and raising the vehicle tires off the ground. It was quite easy to do with the hydraulic jacks. 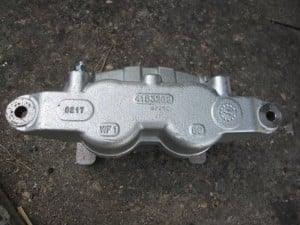 Next came out the impact guns, the wheel covers were removed and the tires came off. The helper that began work on my vehicle was initially struggling with my Crossfires but he quickly got that under control. Here come the new calipers, one was placed in the vicinity of each of the wheel openings.

When all the rubber was clear, David my tech for this repair came out and began to disassemble the rear calipers. What was found surprised me because it was like Déjà Vu all over again, like Yogi would have said. When we pulled the rear calipers off the brake pads were worn approximately 50% of the way. Essentially you could see that the lining was a little thicker than the pad back plate and this typically is a sign that the pads need to be replaced however on BIG brakes like this I could have gone a few more thousand miles but why bother, I opted to get a new pair of pads. After all I’m here and the wheels are off at this point. 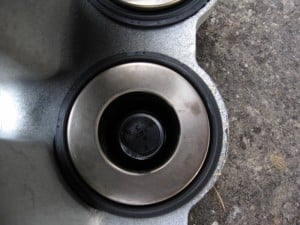 The inside of the pistons are stamped with a “B”. This stamp identifies the new piston material.

OK so what’s so unusual? In July 2008 I had all my brake components replaced by Larry’s at some 65,000 miles. I previously wrote that I had worn my pads down to the point where the back plate was chewing up the rotor. Not a very good scenario at all. At that time I went for calipers, pads and rotors. Today we see where the back pads are worn down ~45% in some 21,000 miles and 2 years. The rotors on the drive axle were both perfect. Now here’s where the other shoe drops.

Curious I inspected the front brake pads and they show no appreciable wear at all. Perhaps 10% – 15% if that was all that they were worn. In my school, I was taught that the weight of a vehicle transfers to the front axle and that the lion’s share of the braking was accomplished by the steer axle. In any of the cars I have had with disk brakes, I have had to replace the front pads and rotors while still running the same stuff on the rear axle. So it’s like a small mystery to me but now that I have seen a pattern, I can anticipate when my brake pads are going to need to be inspected and or possibly replaced. 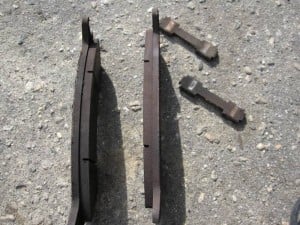 The lining material was almost as thick as the backplate. I chose to replace the rear pads with new ones.

On the rear calipers both the leading and trailing pins were removed and the caliper set aside. A new set of semi-metallic brake pads were installed on the drive axle along with the new calipers. The rotors were smooth and we elected to leave them alone. The pins were coated with the appropriate lubricant and new pad slippers were installed on the anchor plate. The pins boots in all cases were retained. The brake pads were put in place. The stock bleeders were removed and I provided a set of 4 of Oemy’s Speed Bleeders which were each threaded into the bleeder ports. The calipers were installed on the trailing pin first and rotated up and the leading pin was installed and secured. David just got this new long handle Matco ratcheting wrench. He said it was the best tool that he’s gotten to work on the brakes. He didn’t bother getting the whole set, just that one sized wrench is all he wanted. The pins were ratcheted up and tightened. The brake line was brought over from the old caliper and installed on the new. The ABS sensors were not serviced. 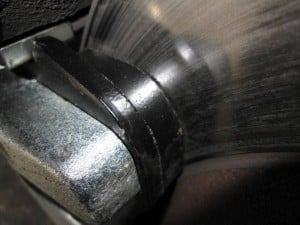 New pad and caliper. The rotors were all fine without any stress cracks.

The opposite wheel was serviced in the same manner and again the lining on the pad exhibited some appreciable wear.

Moving up to the front wheels, the old calipers were removed and the new calipers were installed and that was it. David brought his hand operated vacuum pump and inserted the hose into the master cylinder reservoir and started removing brake fluid. The attached bottle was 16 ounces and 2 bottles of fluid were removed from the Hydro-Max. David said that although most of the fluid comes out from either hole he pumps out both just to make sure he gets it all. While the fluid was being withdrawn I noticed how clean my fluid was since I had just recently flushed it. 2 Quarts of DOT3 were brought over and one was immediately poured into the master cylinder reservoir. 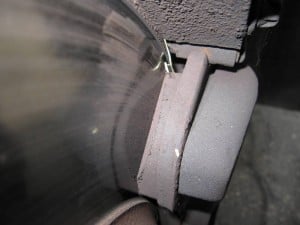 When we were ready, I sat in the seat, started the engine and pumped the pedal to bleed out the calipers. That went by quickly with but a few pumps at each wheel. The master cylinder reservoir was topped off and the caps were secured. Once the tires were but back on the motorhome, the Crossfires were put back on. The tire pressure was checked and adjusted because the tires will leak down when the Crossfires are removed. Bringing up the pressure to the Crossfire’s 90 PSI rating, the cross hairs line up on the center of the sight gauge. Done. 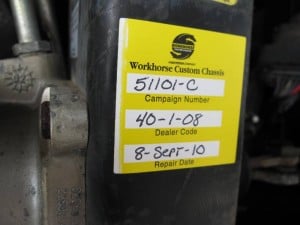 Campaign Sticker is fitted to officially complete the recall.

The vehicle was lowered and was taken out for a test drive. All set and ready to go in approximately 3.0 Hrs. 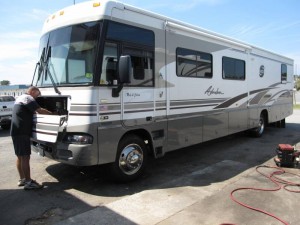 Final checks and ready to roll!

The Service Center is: