You are here: Home / Top Stories / Calico Lives Again
This post may contain affiliate links or mention our own products, please check out our disclosure policy here. 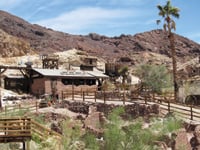 Part living-history museum and part family-friendly tourist attraction, Calico Ghost Town Regional Park in the Southern California desert is anything but dead. Thousands of visitors come to this western town every year to tour the underground Maggie Mine, ride the narrow-gauge Calico & Odessa Railroad, pan for gold, shop, and attend special events. A large campground makes it convenient to stay awhile. The town’s identity comes from the surrounding Calico Mountains, so named for their multi-colored rocks and minerals. It was this patchwork of color that enabled a few fortunate miners to strike it rich over a century ago.

Like many mining boomtowns gone bust, Calico was once full of life. Founded in 1881, it reached its population peak of 3,500 in 1886, but within about 15 years it met its demise when the price of silver sank to 63 cents per ounce from $1.31. In its heyday, the town had a wide variety of businesses and shops, hotels, a jail, 22 saloons, a Chinatown, and a red light district. In addition to commerce, more than 500 mines were dug in and around Calico and about 30 miles of tunnels honeycombed the hills. The Bismark, Oriental, Odessa, Waterloo, Garfield, and the famous Silver King Mine that started the silver strike generated the most wealth. The Calico Mining District was the richest in the state and produced about $86 million in silver and $45 million in borax (used in soap-making) between 1881 and 1907. All the silver was sent to San Francisco to make coins.

By around 1896, down-on-their-luck miners and store merchants began loading their mules and moving on. An attempt to revive the town was made around 1915 when a cyanide plant was built to try and recover silver from the unprocessed Silver King Mine’s deposits, but Calico largely remained a ghost town. That is until Walter Knott, famous for popularizing the boysenberry and creating the Knott’s Berry Farm theme park, purchased Calico from the Zenda Mining Company in 1951.

Referencing old photographs, Knott restored many of the original adobe buildings on their original sites to look as they did in the 1880s. Wooden structures have since been added or replicated, all with a rustic weathered look that creates a picturesque little town.  Knott donated Calico to San Bernardino County in 1966, and it was designated a California Historical Landmark.

Everywhere you look, you’ll see official signs warning of the dangers of entering abandoned mines in and around Calico. Luckily, the Maggie Mine is the exception. Located right in town, this self-guided underground tour is a safe and fun way to learn about hard-rock silver mining. Story has it that this mine was named the “Maggie” by John Mulcahy, who was supposedly inspired by the words to a song that was popular during the silver strike. John’s widowed mother and six other siblings arrived in Calico in 1884, and eventually John bought the mine. He and his brothers lived and worked in the tunnels for about 20 years.

If you had entered the main tunnel 130 years ago with the Mulcahy brothers, you would have normally walked alongside iron rails. Although the tracks for the ore cars are long gone, the tunnel’s size is the same—about five feet wide by seven feet tall. There was no wasted space when it came to working the mines back then—just enough room for a miner and an ore car! The first thing you see in the tunnel today is a display of minerals typical of those found in Calico. As the lights dim and the black light illuminates the rocks, a rainbow of color appears, indicating the presence of calcite, zinc, tungsten and more.

As you follow the tunnel, interpretive signs, dioramas, and the recorded voice of an old-time prospector provide a look back into the mine’s history. You also see the latest and greatest technology from the 1890s, namely a hydraulic drill. Most miners, though, relied on their picks, heavy sledgehammers, and gunpowder or dynamite. You’ll also see an ore chute and learn how miners communicated through bell signals to know when it was safe to send a massive ore bucket down a 100-foot chute. Dead Man’s Drift is the concentration point for a multitude of ore veins, so a large open space (also called a stope) was created as the material was dug out. Chances for a cave-in were greater in this particular area of the mine, hence the harrowing name.

What you won’t see a lot of in the Maggie Mine that is typical in most other mines are wood timbers shoring up the walls and ceilings. Because these tunnels were blasted into volcanic ash, which had turned to solid hard rock over millions of year, not a lot of extra support was needed. This saved the miners time and money. 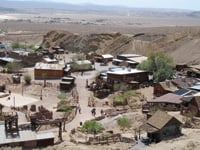 After exiting the Maggie Mine, take a scenic ride on the narrow-gauge Calico & Odessa Railroad, originally used to cart silver ore from the mines. Listen to the recorded narration to learn more about Calico’s history. You can also climb up to a lookout for a great bird’s eye view of the town. Notice the “homes” carved into the rock where miners used to live. They took advantage of natural materials, which also helped keep them cooler in summer and warmer in winter.

You can’t miss Calico’s Bottle House, built in the 1950s during Walter Knott’s restoration. It is not known if a house built with bottles actually existed in old Calico, but authentic bottle houses are found in other mining ghost towns, so the chances are pretty good one was here, too. After all, miners used what they had on hand, and were clever in creating shelters when wood was not plentiful. Reusing whiskey bottles was very practical. With so many saloons in town, there would have been a near endless supply of liquor bottles—what a way to reduce, reuse and recycle! Today, Calico’s Bottle House is home to a dog-themed gift store, in honor of Calico’s beloved canine mail carrier, Dorsey. Before the population warranted a human postmaster, Dorsey delivered mail for about two years between Calico and the mining camps in the next canyon—Garfield, Odessa, Occidental and others. Dorsey’s delightful story is posted inside the gift shop. 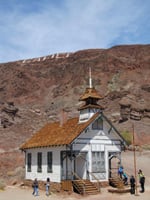 As you stroll down Main Street, you’ll notice that some of the shops have signs chronicling the original purposes of the building, the owners, and other interesting historic details. For example, the current Sweets Shoppe is a re-creation built to look like the Cosmopolitan Hotel that once stood on this site in the early 1880s. The Lane House Museum was once the home of long-time Calico resident, Lucy Bell Lane (1874-1969). Having lived here for 67 years, she was known as the “Queen of Calico” for her friendly hospitality and vivid storytelling. You’ll also find an 1888 Ahrens Steam Fire Engine on display in the firehouse, and kids will love The Gold Panning Experience. At the end of Main Street, walk over the bridge to take a look at the replica schoolhouse that’s furnished as it would have been in the 1880s.

Calico’s cemetery is a short walk from town. Some older graves have wooden markers, but most of their inscriptions have been worn off by the desert winds. Other graves are just mounds of rocks. About a dozen headstones are readable or recent, such as Tumbleweed Harris, marshal of Calico for seven years; Margaret Kincaid Olivier, Calico schoolteacher in 1898 and 1899, and “Death Valley Helen,” who was really Helen Wallace.

Calico Ghost Town Regional Park is located off Interstate 15, about a two-hour drive from either Los Angeles or Las Vegas. Although the roads are paved, the Mohave Desert scenery is sparse, giving it an appropriate “out in the middle of nowhere” feel. But when you see the giant letters spelling CALICO high on the mountain behind the ghost town, there will be no doubt that you’ve found it. And here’s a little secret about those big letters that spell CALICO: Locate the letter “O” then look down about 300 feet and slightly to the right to see the opening to the Silver King Mine that started the strike more than 130 years ago. This mine alone produced $10 million in silver in just 11 years. Eureka!

Denise Seith is a freelance travel writer and treasure hunter in Salem, Oregon. She and her husband Larry own www.GoldRushTradingPost.com, an online prospecting equipment and supply store.

Admission: $8 for adults; $5 for ages 6-15; free for children 5 and under; $1 for dogs. Fees are higher during festivals. Some attractions (the Maggie Mine Tour and the Calico & Odessa Railroad) require an additional nominal charge.

Camping: There are 265 camping sites with full and partial hookups. Amenities include hot showers, restrooms, grills, fire rings and two dump stations. Fees are $30 a night without hookups, $35 with partial hookups and $40 with full hookups. Senior rates that are available only Sunday through Thursday are $5 less. Higher fees may apply during special events. Admission to the town is free if you are staying at the campground.

An OHV trail runs from the campground to the BLM OHV riding area.