You are here: Home / Top Stories / California’s Old Faithful
This post may contain affiliate links or mention our own products, please check out our disclosure policy here. 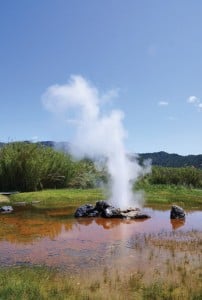 A chance visit allowed me to see and learn about one of only three geysers in the world bearing the Old Faithful moniker. Most people in the United States associate Old Faithful with Yellowstone National Park, but there is a geyser with the same name on North Island in New Zealand and another near Calistoga in California. After our visit to the one near Calistoga, my wife, Gayle, and I believe it should be on the “must see” list for anyone fortunate enough to be traveling anywhere near that area.  Even during our mid-week visit, there were lots of kids and adults in attendance, and they were obviously enjoying the experience. We were impressed enough to consider a return with our kids and grandkids in the near future.

When we were there, Old Faithful would shoot water and steam skyward about every half hour for about four or five minutes. It was an awesome sight, and what a photo op! Sometimes, when the sunlight and wind conditions are right, rainbows are created.  In the evening, strategically placed lights enhance the viewing experience.  During the entire time we hung out, a large white egret stationed itself in the pool of standing water near where the steam and water spew from the rocks. It seemed oblivious, both to the geyser’s periodic activity and to people approaching to take photos. There were schools of small, apparently very adaptive, fish that seemed to flourish in the warm and sulfuric pool. The egret was gorging itself. Nearly as many people were taking pictures of the bird as were photographing the geyser. 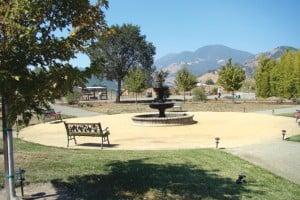 There are many camping options for RVers in the area, but we stayed at the Russian River RV Resort in Cloverdale, which is a short drive from Old Faithful through beautifully maintained vineyards. The RV park’s campsites are spread over hilly terrain that is covered with a pleasant mix of oak, pine and other trees. Wildlife is in abundance, including lots of deer. The property has plenty of river frontage too. Since the park is located along the river, there are no sewer connections, but there is a dump. Only 30-amp electrical service is available. There were many sites large enough to accommodate our 35-foot motorhome and tow. However, if you do decide to go there, don’t follow GPS instructions!  To avoid a major problem, just take Geysers Road (Exit 525) off Highway 101.  Then go south along the river about 1.3 miles to the entrance.

We traveled in our dinghy to Geyserville, Calistoga, and the hills above—on which are situated the largest collection of geo-thermal plants in the world. Along the way, we learned a great deal about geothermal activity, including geysers. Since we had never heard of California’s Old Faithful until shortly before our trip, we were surprised to learn that it is one of the most photographed locations in the state.

The area has other attractions, too. People come from far and wide to experience the healing mineral water and mud baths at the spas in and around Calistoga. The area also is home to more than 200 wineries, and there are many recreational opportunities at the nearby Russian River Resort Area. 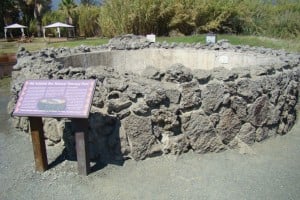 While you are waiting for the geyser to erupt, you can visit a small museum, a gift shop and a unique farm that houses Jacob’s four-horn goats, Tennessee fainting goats and guard llamas in a setting like a petting zoo. Bring a picnic lunch, and maybe some premium wine from nearby wineries, and spend a couple of hours. There are plenty of shaded tables, plus several large cabana-like areas, to make for a very comfortable setting, and all are within easy viewing of the dependable geyser eruptions.

Like earthquakes and volcanoes, Geysers are a result of conditions below the surface of the earth. Water for the Old Faithful geyser comes from an underground river. Magma from deep beneath the earth heats the water, which reaches incredibly high temperatures before boiling. Steam expands up to 1,500 times the volume of water, which produces the extreme pressure that causes eventual release through a fissure. After that eruption, the process begins all over again. 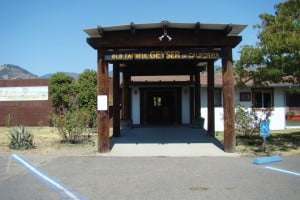 Looking around the valley where the geyser is located, one can see the mountains that were once the rim of a volcano.  It last erupted more than 3.4 million years ago, depositing a large amount of ash across much of Sonoma and Napa counties.  Steam vents formed in the basin that created what is now the famous geyser. Vents also formed in the surrounding hills, which are now the home of huge geothermal plants that harness steam energy. Included in the mountainous backdrop is Mount St. Helena, which reaches 4,200 feet above sea level. The five peaks that form Mount St. Helena afford a wonderful environment for hiking and photography.

The combination that is needed to create geysers—water, heat, and a venting system—exists in only a few places on earth. The nine basins at Yellowstone National Park are home to half of the world’s geysers. Others are in Russia, Chile, Iceland and New Zealand. But of the more than 1,000 geysers in the world, only three are dependable enough to bear the name Old Faithful. 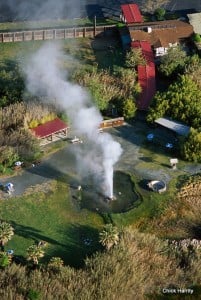 During your visit to the Calistoga area, try to visualize the native people of the Wapo Tribe establishing villages nearby. They discovered the steaming vents, hot mud and mineral waters bubbling out of the earth. Centuries ago they spoke about the healing properties they experienced. Natives traveled long distances to take advantage of bamboo sweat lodges; also, bathing in the hot mud and pools of mineral water.  They also used the mud to counter the effects of sunburn, insect bites and stings. Today many others travel long distances to take advantage of the same things, and for the same reasons.  Why not take advantage yourself?  I suspect we will be back, maybe to try out the much-publicized mud baths.  From all that we’ve read, it would be a memorable experience.

Ken Reid is a travel writer and longtime RVer who lives in Modesto, California.