You are here: Home / Top Stories / Camels Come to the Southwest
This post may contain affiliate links or mention our own products, please check out our disclosure policy here. 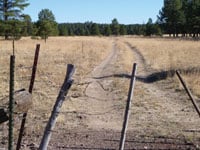 Even today, the southwestern United States can be a forbidding place for travelers. Empty is often the first impression to come to mind. Austere and challenging are others. The mountains don’t roll as they do in the eastern Appalachians; they thrust upward in crags and jagged peaks with rocky outflows surrounding them like enormous skirts. What vegetation there is seems dull and strange and on closer inspection, often prickly.

Rivers are few. Deceptively dry arroyos cut across the desiccated land; summer thunderstorms can fill them with raging muddy torrents threatening anyone or anything in their path. Towns and cities are far apart. There are few farms, and only occasional signs of vast ranches or Native American settlements. Travelers race along Interstate 40 or 10, praying that they don’t blow a tire, or worse, an engine, in this Empty Quarter.

In the mid-1800s, the land was little different than it is today, and traveling across it could be deadly. It had just become part of the United States, and the administrations of Presidents Polk, Taylor, Fillmore, Pierce and Buchanan were trying desperately to find out what they had wrested from Mexico. Railroads were still reaching for the Mississippi River, and Congress was inflamed over which route would be chosen on which to drive those steel rails to the Pacific, uniting California and its gold with the rest of the United States.

The stakes were high. If the rail route crossed the southern United States, the future of the slave states of the South would be more secure. Slavery itself might be expanded into this new territory. On the other hand, if the steel rails were to cross the center of the continent or the northern tier, the agricultural south might be forever subservient to the industrial north. Rather than choose one route over another, Congress and a series of weak presidents opted to appease everyone by sending explorers along various routes. It was the explorations along the 35th parallel and subsequent road development that produced one of the more interesting transportation experiments in American history. 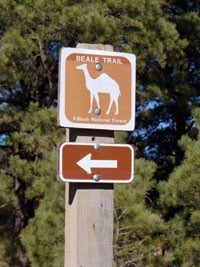 The search for the best rail route was fraught with danger. For the most part, the explorers simply did not know what was out there. If they could find an old fur trapper or a cooperative Indian, they might get advance warning that the path they were following would lead to such obstacles as the Grand Canyon or the high peaks of the Rocky Mountains. But more often than not, the men they hired as guides had gained their position through bluster and bravado rather than actual knowledge, as Edward F. Beale discovered when his intrepid guide led his party right to the edge of Arizona’s Canyon Diablo, a chasm at least 100 feet deep. It took the company a 25-mile detour to get to the other side.

Even when the explorers weren’t freezing to death, as some of John C. Fremont’s company did in the winter snows of the Rockies, or being killed by hostile Native Americans as John W. Gunnison was, the explorers had to deal with a basic conundrum. There was an absolute lack of forage and water along the southern routes.  And that meant they had to use more than half of their wagons simply to haul food and water for the draft animals. The biggest problem for the explorers wasn’t marauding Indians, worthless guides or even the forbidding nature of the land; it was finding or transporting enough food to keep their animals alive and at a cost that would keep government auditors appeased.

At best, mules could be expected to haul 300 pounds. In the search for alternatives, the possibility of camels arose. One proponent, Gwin Harris Heap, claimed that camels could carry twice as much as an army mule, do so at greater speed, eat just about anything and go for days without water.  This impressed Jefferson Davis, the secretary of war, and Maj. Henry Wayne of the Quartermaster Corps. In 1855, Congress, having finally decided the use of camels wasn’t some kind of bizarre joke, appropriated $30,000 for the purchase and importation of camels and dromedaries for military purposes.

Heap, Maj. Wayne and Lt. David Dixon Porter were given the task of procuring the camels from the Middle East. They brought them across the Atlantic in the dead of winter on Porter’s sailing vessel, The Supply. Thirty-two camels set out on the voyage. Two died in transit, but amazingly, four camels gave birth, for a net increase of two.

Language Problem
Getting the camels to the United States was only half the battle. The camels responded to voice commands, provided the commands were given in Syrian, Arabic or other Middle Eastern languages. English was definitely not part of their vocabulary. To make up for this deficit, two Arabs and three Turks were hired for a year to tend the camels.  At the end of the year, they were promised their passage home.

Camels and camel tenders arrived in Texas and were stationed at Camp Verde. Early on, it was reported by Jefferson Davis that a train consisting of wagons drawn by mules and unencumbered camels set out for San Antonio 60 miles away for supplies. Six camels returned carrying a total of 3,648 pounds, which was equal to two wagons drawn by six mules apiece.  The camels made the trip in two days and six hours whereas the mule-drawn wagons took four days and thirty minutes.  Davis concluded his report by observing that the good ship Supply was bringing back 40 more camels.

Edward Beale, the explorer who had run afoul of Canyon Diablo, bid successfully on a road-building contract to link Fort Defiance on the present Navajo reservation to the California border near Needles. There are differing accounts as to whether Beale advocated the use of camels or was coerced into using them as part of the military’s experiment.  In either instance, Beale came to appreciate the ability of camels to expeditiously handle loads beyond the capacity of mules. 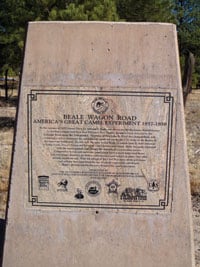 On January 8, 1858, the Los Angeles Star reported that Beale and about 14 camels “stalked into town last Friday week and gave our streets an Oriental aspect. It looks oddly enough to see, outside of a menagerie, a herd of huge, ungainly, awkward, but docile animals move about in our midst with people riding them like horses…”

The Los Angeles Star continued, “They (the camels) were found capable of packing one thousand pounds weight apiece and of traveling with their load from thirty to forty miles a day, all the while finding their own food over an almost barren country.  Their drivers say that they will get fat where a jackass would starve to death.”

Camel Detractors
If the War Department and Beale thought the camels were the answer to their transportation prayers in the Southwest, there were others who held quite a different view. Mule skinners hated the beasts, claiming with considerable justice that horses and mules were terrified of the camels. Yes, answered a proponent of camels, but Indians also were terrified of them, which meant there was little reason to fear an Indian raid for the purpose of stealing the camels, as there always was in the case of horses or mules.

One unimpressed army officer noted that indeed camels would eat anything, including, he charged, the very wood wagons that were needed for transport. There were also disputes about the feet of camels. Some claimed camels could go anywhere; others charged that camel’s feet were cut and injured on the rocky soil and old lava flows that covered much of the Southwest.

In the end, what doomed the great camel experiment was not the suitability of the camels themselves as beasts of burden. It was the much greater cloud of doom that gathered over the United States of America in the late 1850s. The North and South had essentially gone in separate directions. The North had become the citadel of industrialization whose economy was based on factories and commerce.  Northern states were proponents of high tariffs to give their factories a competitive advantage over the products of Europe. The South had clung to agriculture, primarily based on tobacco and cotton, which in turn depended on slave labor. With little industry, the South had to import manufactured products, which meant that high tariffs worked against them. Unskilled slaves weren’t much use in the northern economy that depended on skilled workmen, and by the 1850s, slavery had become both the cause and the symbol of the deep divide between North and South.

As the 1850s drew to a close, army officers increasingly saw their allegiance to their states instead of the nation as a whole. Jefferson Davis, his successor at the War Department, John B. Floyd, and Maj. Wayne, all supporters of the camel experiment, were southerners, and with the election of Abraham Lincoln in 1860, all made their way south to serve the Confederacy.  There were those such as Beale who continued to think of camels as the solution to the transportation problems of the Southwest, but as the clouds of war gathered over the land, fewer and fewer had any interest in pursuing the usefulness of camels.

Camels Outlawed
Camels did perform usefully in certain circumstances. When it became necessary in 1860 to survey the boundary between California and Nevada, the surveyors had to go through the heart of Death Valley. Camels proved of real assistance in that effort. But increasingly, camels became outcasts, turned loose to survive on their own. Mule skinners never got over their hatred of the beasts, and as a result, some Nevada towns passed laws making it illegal to bring a camel within the town limits.

The camel drivers fared little better. Some, when their year of service expired, returned home to their native lands. Others, hoping perhaps that life in the United States would be freer and more rewarding, chose to stay. Little is known of their fate. One did end up symbolizing the camel era. There is a stone pyramid in Quartzsite, Arizona, erected in 1935 with a small metal camel silhouette atop, and an inscription that reads “The Last Camp of Hi Jolly.”  Hi Jolly was Hadji Ali, a camel driver whose name had been corrupted to Hi Jolly by men who couldn’t be bothered to learn how to pronounce his real name. Hi Jolly died in poverty in Quartzsite in 1902.

Today, few would guess there was a time when camels were actually seen as a solution to transporting goods and people across the arid lands of the Southwest. If the Civil War hadn’t intervened, it is possible our picture of the Wild West might have been considerably different.  Can we really imagine John Wayne racing across Monument Valley astride a camel?  Would the Twenty-Mule Team Borax have sold as well if it had been Twenty-Camel Caravan Borax?  Maybe it was never meant to be; yet there was a time when the great Southwest was almost Camel Country.

Gerald C. Hammon is a writer who lives in Prescott Valley, Arizona.