You are here: Home / Blog / CamperForce at Amazon
This post may contain affiliate links or mention our own products, please check out our disclosure policy here. 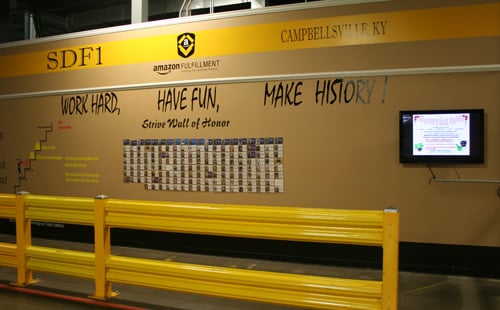 In recent weeks, newspapers and television reports have cried: “Amazon is a jungle—a cruel workplace that pushes white-collar workers to unacceptable limits.” Since the online retail giant hires hundreds of Workampers each season, my ears perked up at the headlines on television news. In fact, I worked a season myself for amazon.com in Coffeyville, Kansas. Lee worked that season as well, and then returned in 2013 to work for the company again in Campbellsville, Kentucky. We have numerous RVing friends who work each Christmas rush—or “peak,” as Amazon calls the months leading up to Christmas day. Many depend on paychecks from those weeks and months of work to sustain their RVing lifestyle.

One news report described Amazon’s workplace as “brutal.” The New York Times described a Darwinian or Dickensian kind of atmosphere in which workers have only a 30-minute lunch break in a ten-hour shift, and often have to walk 20-minutes of that time to get to the common room where lunch bags are stored and vending machines are available. One report stated that while many employees like being pushed past their limits to help their careers take off, others struggle with a culture one former executive called “survival of the fittest.” Others claimed that employees were evaluated too harshly when they endured situations such as cancer or the loss of a pregnancy. Some complained that employees were required to go through security turnstiles upon entering the huge warehouses to monitor if product was hidden in pockets or bags.

Are these claims justified? Do many of them apply to full-time employees, perhaps, even on the management level? Were some of the reports even from Amazon fulfillment centers on other continents? I only know my experience and the experiences of Workampers I have interviewed on the job at Amazon. 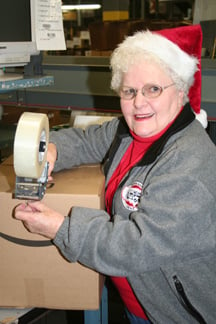 First, the work is hard. Brutal? Cruel? In my experience, I would not use those descriptions, although at the end of a work week, my body likely screamed out those words! Working ten or eleven-hour days, standing for a whole shift, is exhausting. However, Amazon states that upfront. Lee and I found the jobs to be exactly as recruiters described when we applied. The 30-minute lunch break is true. And often half that time is spent walking through a building the size of 13 football fields to the break room. Fifteen minute breaks happen twice during each shift. However, when I worked on the one-item shipping line, I could clock out at any time to use the restroom. Employees do pass through security entering and leaving the plant. 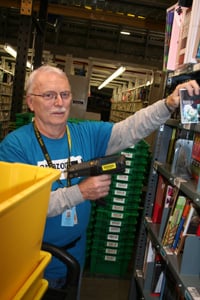 The work pace at Amazon is fast and quotas are expected. In Coffeyville, Lee and I each stood at one computer for our entire shift, scanning and packing products that arrived on a conveyor line. We had to gather different sized boxes and assemble them to fit various merchandise. Other jobs in the oversized fulfillment centers include receiving new products, scanning and stowing items on shelves, and picking and scanning items to fill orders. Some who work as “pickers” clock as much as fifteen miles a day 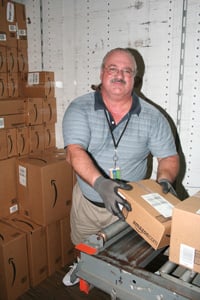 When the items have been received, stowed, picked, and packed for shipping, someone loads the trailers that transport the boxes to shipping points. Those jobs require muscles for lifting and packing boxes snugly for rides over highways.

Workampers were introduced to Amazon at the fulfillment center in Coffeyville, Kansas, in 2008. Up until that time, the company had transported workers by bus from larger population centers. Managers stated that they never knew from one day to the next who would get off the buses. The skills of workers were inconsistent, and often, non-existent. Management immediately recognized the regular attendance of Workampers, their commitment to learn new jobs, and to work efficiently.

Travis Thomas, Operations Manager, said: “Workampers truly provided the Amazon Fulfillment Center at Coffeyville, Kansas, with a great holiday experience. Personally, 2008 was my 10th peak season at amazon.com, and my third as a manager. That season was, by far, the best Christmas experience I had ever had with the company.  The Workampers were reliable and flexible, in addition to being a pleasure to be around. It was simply incredible to see how things went versus years past.”

Pat McConaghie, Shipping Area Manager, said: “Workampers started earlier in the year and gained a skill set that they retained. They were dedicated to giving 100% on a daily basis and never missed work.” 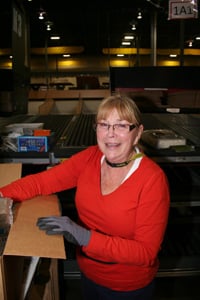 The concept of hiring Workampers proved such a success that it spread to other fulfillment centers from Fernley, Nevada, Campbellsville, Kentucky, and Haslet, Texas, to Murphreesboro, Tennessee, and Jefferson, Indiana, to name a few. The company formed its own recruitment arm called CamperForce. Seasonal workers note that Amazon pays decent wages—from $10.75 to $11.25 an hour. Plus, Amazon pays for RV sites and full-hookups, offers a bonus for commitment completion, and an Amazon discount. Although the CamperForce group exchanges information and ideas over the Workamper News forum, schedules preclude the usual socialization among RVers. With people sleeping and working in varying shifts, get-togethers are almost non-existent. There are not the usual campfires with folks sitting around swapping travel stories. Yet, some of this does happen, especially in places like the Green River Lake State Park near Campbellsville, Kentucky. Amazon typically hosts an annual picnic and holiday dinners for employees.

Ten-hour shifts, both day and night, run Sunday-Wednesday and Wednesday-Saturday—unless one works the donut shift, which means work days are Monday, Tuesday, Thursday, and Friday. At Campbellsville, Heartland RV Park is within walking distance of the fulfillment center. However, some Workampers prefer to park at Green River Lake State Park or at The Stables, another park close to the state park and Green Lake. These sites are less than ten miles from the Amazon fulfillment center. However, Workampers working at fulfillment centers in Murphreesboro, Tennessee, and Haslett, Texas, have a few more miles to drive to their jobs.

Temporary workers’ start dates at amazon.com vary from mid-August to late November. However, many Workampers begin their assignments in late October and early November, in time for the Christmas shipping rush. The official ending date is usually around December 23. Amazon finds its workers via recruiting events at RV Shows, such as the one in Quartzsite, Arizona, in late January, and at Workamper Rendezvous, the third week in October, held in Heber Springs, Arkansas. Many Camperforce hires also come by word of mouth.

A majority of Workampers agreed that working at amazon.com is a good experience. Yet, the job is not for everyone due to long hours, strenuous work, and the pressure for high numbers of productivity. After Thanksgiving, the onset of 11-hour days and the five-day work week adds to the workload. One’s mindset is the key to successful working at Amazon—remembering that the point of the job is good wages in a relatively short amount of time.