You are here: Home / Top Stories / Castle Dome: From Mine to Museum
This post may contain affiliate links or mention our own products, please check out our disclosure policy here.

Maybe it is the nondescript road departing Arizona State Highway 95 or because there was never a shootout at the local corral or  maybe it wasn’t lawless enough to earn a phrase like “Goodbye God, I am going to Bodie.” Whatever the reason, the ghost town of Castle Dome City isn’t nearly as well known as its famous cousins, yet is just as much, if not more, fascinating to visit.

The history of Castle Dome City dates back to the 1600s, when Spanish conquistadors discovered rich galena (silver/lead) ore in the Castle Dome Mountains. Evidence of early mining can be seen by trail blazes slashed in cacti and the excavations they left behind. The Spanish are believed to have used Indian slave labor to mine the valuable minerals. The ore was then sacked and shipped back to Europe, where it was refined and traded. Strife and war with the Indians eventually forced the Spanish to abandon the mines. 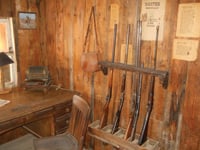 In 1852, the first American miners arrived in the area, establishing Fort Yuma with the first major discovery of placer gold made in 1858 by Col. Jacob Snively in the Gila Mountains. Gila City sprang up at the discovery location but was soon washed away by a flood. Undaunted, Snively continued to prospect his way north of Gila City, finding high-grade galena ore in 1864. Soon a boomtown, known as Castle Dome City, named after the nearby Castle Dome Peak, sprang up near the mines. The city had five saloons, a mercantile, barbershop, sheriff’s office, a jail, a hotel, a doctor’s office, blacksmith shop, brothels, a school and numerous homes for the miners.

In 1871, the Floral Temple mine was patented, only the second such designation in Arizona, and the Castle Dome Mine was patented in 1876. By this point in time the mining district contained over 300 mines, with big corporations in New York City and San Francisco supplying the investment capital. Due to the remoteness of the mines and lack of a railroad, some of the largest wagons in the world were constructed to carry supplies. The wagons had a capacity of 20 tons, requiring a team of forty horses or mules.

By 1878, Castle Dome City exceeded Yuma as the largest settlement in the area, with 3,000 residents and regular stagecoach service to Phoenix. For the next decade the mines poured out their wealth, and Castle Dome City, like other Wild West boom towns, became know for drunkenness, fights and murders.

By the turn of the century, the price of silver and lead declined and the mines became unprofitable. One by one the mines closed and the residents of Castle Dome City moved away.  However, this was not the end of the mines. During both World War I and World War II, the government’s need for lead revived the mines. More than 9 million pounds of lead ore were mined out of the area, leading Castle Dome to be considered one of Japan’s top strategic targets. Fortunately, Japan lacked the long- range bombers that would be needed to mount a strike against the mines. After the war, production slowed. The mines shut down for good in 1979 because of the falling price of silver. Residents drifted away, and buildings deteriorated in the harsh desert climate.

Castle Dome City received a new lease on life in 1993 when Allen and Stephanie Armstrong purchased the remains of the city. Since then, the Armstrongs have spent their time creating a sprawling museum out of the site. The Armstrongs began with a handful of the original structures that were still standing. Additional buildings were hauled in from outlying mines, while others were recreated onsite using salvaged materials. Today, visitors can wander through scores of buildings, including a hotel, assay office, doctor’s office, church, blacksmith shop, sheriff’s office, ore mill, jail and several saloons and even explore a mock mine adit.

You’ll be hard-pressed to determine which buildings are original and which have been constructed by the Armstrongs. What makes this gussied-up ghost town so fascinating is that each building is stuffed to the ceiling with period artifacts, furniture and equipment. Every structure is a mini museum that shows what life must have been like over one hundred years ago when the town was booming. What a dusty, hot, rough and tough place it must have been.

The jail looks like the sheriff just stepped out to make his rounds; the church is ready for Sunday worshippers with Bibles in the pew racks and sheet music ready for the organist; the mercantile is still well stocked waiting for the next customer, and tools hang in the doctor and dentist offices waiting for the next patient. The boardwalks still creak, the church bell rings out and the saloons just await their next brawl and shootout. 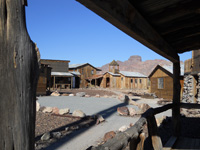 Most of the artifacts on display in Castle Dome Mine Museum were recovered from surrounding mineshafts. For years, Allen Armstrong has been exploring the hundreds of shafts chiseled into the countryside, often rappelling nearly one hundred yards into their darkness. He has descended shafts that have been closed off for a century or more, uncovering a trove of relics delicately preserved by the near perfect mix of humidity and temperature.

Armstrong says, “We went into one drift where it looked like the miners might be back any minute, dynamite was still in the holes, fuses were there and blasting caps. They were all set to fire off another round. And on the floor was a newspaper with the headline, ‘Bulgaria Surrenders, Hostilities End.’ It was the end of World War I. I could just envision the foreman coming down and telling everyone it was their last day of work and they just walked away.”

Armstrong has recovered miner’s equipment, documents, bottles, tobacco cans, dynamite boxes, canned goods, century-old matches that still light, hats and clothing, including a pair of Levi’s dating to 1890. When Armstrong boasts that he owns one of the oldest pair of Levi’s jeans, he’s not exaggerating. During his forays into the desert, he also has found boots and stirrups from conquistador times.

“The people left in such a hurry,” he said. “In a lot of cases, I think they planned to come back. They just didn’t make it. This is a tough place to get back to.”

Visitors are allowed to wander through the ghost city at their own pace, soaking it all in. Wooden planked floors creak with every step, while sun-faded curtains flutter against a gentle breeze. Rest awhile in one of the saloons listening to the echoes of the past, do you hear the ghost calling?

If you are looking for a taste of the Old West without the crowds, then be sure to visit Castle Dome City on your next Southwest Arizona RV journey. It is more than just another ghost town; it is a journey back in time.

Castle Dome City is about 45 miles south of Quartzsite off U.S. Hwy. 95.

The museum and the trail are open from 10 a.m. to 5 p.m. every day from November through April (call ahead for hours from May through October).  For more information, call (928) 920-3062 or visit castledomemuseum.com.