The first celebration of spring for most of us is St. Patrick’s Day. Americans celebrate this day in a manner that is usually wild and festive. And many of us prepare a corned beef and cabbage dinner even though it is not eaten in Ireland, not even on St. Patrick’s Day.

Traditionally, the day in Ireland begins with Mass at the village church, followed by a parade and a stop at the local pub where glasses clink to “Slainte!” (a Gaelic toast meaning “good luck!”). Baked ham is likely to be part of the traditional Irish menu, basted with Guinness Stout, a creamy brew from Dublin.

Wherever you are, be it traveling, hooked-up in a RV park some place, or still at home, invite some friends over and celebrate St. Patrick’s Day

Place the corned beef brisket in a deep pot and add cold water to just cover. Add beer, onion, celery, bay leaf, whole cloves and black peppercorns. Cover and bring to a boil; immediately reduce heat and let simmer about 4 hours until tender. About 30 minutes before the meat is done, remove and discard onion, celery and bay leaf; skim off excess fat, and add potatoes and carrots and simmer 15 minutes. Add cabbage and simmer an additional 15 minutes. This will serve eight nicely, and is a complete meal in one pot. Of course, this is for that day you lay over some place and are not traveling.

But if you have a hankering for corned beef and are on the road, pull out your slow cooker and cook during the night while you are sleeping. Let the corned beef sit in the refrigerator during the next day while you are traveling, and at dinnertime simply slice it and heat it. To cook a 3-4-pound corned beef brisket in a slow cooker, place 6 medium potatoes, peeled and quartered, 3 medium onions, peeled and quartered, and 1 cup of thinly sliced carrots in the pot first; then place the corned beef atop the vegetables. Pour 1 cup of beer over all. Cover and cook on the low-heat setting for 9-11 hours.

Maybe you’d prefer just putting your corned beef into the oven and baking it:

Place corned beef in a large, flat baking pan; add water to a depth of 1/4 inch. Cover with a lid of foil, and place in a preheated 300-degree oven for 3 1/2 to 4 hours. When the corned beef is done, pour the liquid into a deep pot. Add about 3 cups of water; bring to a boil. Hold the corned beef in a warm oven while preparing the vegetables. Add potatoes and simmer until about half done; add carrots and cook until just tender. About 10 minutes before serving, add cabbage wedges and cook until tender-crisp. Slice corned beef across the grain and serve on a platter surrounded by cabbage wedges, potatoes and carrots. Offer horseradish for those who like it.

What makes corned beef? It’s not because the cattle were raised on corn. This salted beef actually has nothing to do with corn, but got its name in Anglo-Saxon times when a granular salt the size of English grain—their so-called corn—was used to process it. It is made of less tender cuts of beef, such as brisket (the choice), flank, rump, and chuck, being cured in a salty brine with pickling spices and assorted seasonings. Originally this process, referred to as corning, was a way to preserve meat; today it is appreciated for the distinctive flavor it creates. Corning does not tenderize the meat; to do this, it is necessary to cook it in liquid for several hours.

Irish immigrants, driven from their land by the potato famine, did bring us the Irish soda bread, which is so good with the corned beef. Because there was a shortage of wood for fuel in Ireland, this bread was traditionally baked over a smoldering open peat fire. In America the recipe was changed slightly so it could be baked in an oven.

In a large bowl, stir together the flour, brown sugar, baking powder, baking soda, and salt. Stir in the currants and caraway seed. Add buttermilk; stir till the dry ingredients are moistened. Pour into a greased 8 x 1.5-inch round baking pan. Bake in a preheated 350-degree oven till browned, about 40 minutes. Cool 10 minutes in the pan. Remove from the pan and cool thoroughly. Makes 1 loaf.

HINT OF THE MONTH: If you do not have beer or do not like to cook with alcohol, use chicken, beef, or mushroom broth in lieu of beer. White grape juice or ginger ale works well too. 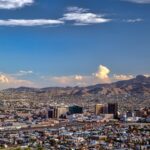