You are here: Home / Maintenance, Modifications and Repairs / Check All Three – LP, Smoke and CO !
This post may contain affiliate links or mention our own products, please check out our disclosure policy here.

I am embarrassed by something that I found today however I would like to share this in the event this happens to you.  The topic is ceiling mounted Carbon Monoxide Detectors.

Over the past many years of ownership, now exceeding 10 years, I have been through 2 – LP Detectors and as many Smoke Detectors.   For some reason, we just ask for these things to run uninterrupted and to protect us when we’re sleeping in the coach.  The problem is that when an LP detector goes bad, they just start alarming for no reason.  There’s no shutting them up unless you unplug the unit from 12 volt power.  The resolution is to buy a new unit and they are not inexpensive.  Smokes can be reset with a new battery in most cases and a vacuum cleaner. 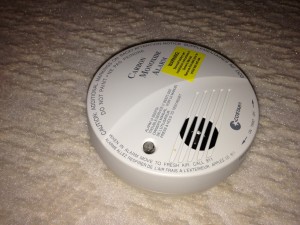 I was working in the bedroom today and for some reason I just happened to look up at the ceiling and I noticed the Carbon Monoxide detector.   I reached up and pushed the test button and nothing.   I figured that the battery was dead but it never once beeped in low battery.    Looking back, I know full well that I had not done anything with the CO detector for quite some time as it was always out of mind for whatever reason.    It’s only been there since 2003!    I got a flashlight and looked at the cover and saw the instruction to remove it from the ceiling.  There’s a ½” long plastic pin that locks the unit.  I removed the pin, twisted the unit and it came off in my hand.

I flipped the unit over and opened the battery compartment.  You are “NOT” going to believe this, but I found that the battery was upside down and dead as a door nail.  Whether or not it was installed like that back in 2003 or if a service center flipped the battery because they wanted to silence the alarm; I really don’t know.   Not only was the battery dead; it wasn’t connected!   “Doh!”   I accept that this is totally my fault that I didn’t check the detector over these past few years so I just wanted to share this with you. 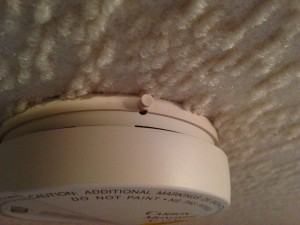 The LP detector is low on the galley wall, has a green LED and its always in view.   The smoke detector is right on the ceiling at the entry door and I change the battery every year.  It always goes off when we make toast!    I don’t know how the CO detector missed the list of safety items that need to be checked but “I’m guilty!”

Now here the rest of the story …. the CO detector is marked ….. Replace in “October 2008!”   Well it looks like I’m batting a 1000% as far as failing to check all systems.  I hope that this will serve as a reminder to go and locate your CO detector, test it to see if it works and check the expiration date! 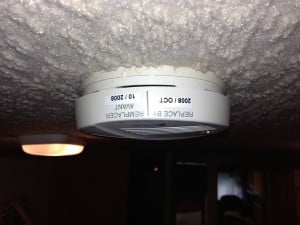 Good news is that the CO detector, now with a new battery, appears to be working OK for the time being.  That said, I’m going to go and buy a new one this week.