You are here: Home / Blog / Chewing Blackbones Campground – The Bad
This post may contain affiliate links or mention our own products, please check out our disclosure policy here.

The last installment found us traveling over twisty roads, through forest fire smoke, around road construction and other frustrations only to arrive at our pre-chosen campground to be met by a national park ranger that tried to turn us away. Gaining permission to camp (The one good thing) is where we left off last week. 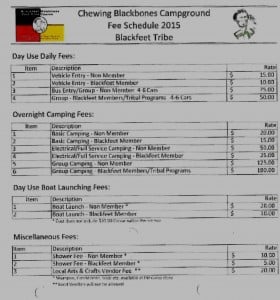 Before I go any farther, let me back up and explain on how we found this campground and arrived at the decision to stay there. As you know from previous entries my wife and I along with some RVing friends, with their own RV, were on a several week RV adventure through Montana. Our goal was to boondock where possible and stay in public campgrounds where we couldn’t camp in the boonies. When visiting the east side of Glacier National Park, boondocking is not an option as you are either in the park (no boondocking “aka dispersed camping” allowed) or within the Blackfeet Indian Reservation (boondocking is not allowed to my knowledge). Not a major problem as both the national park and Blackfeet offer developed campgrounds. Within the park was not an option for us as we were traveling at our own schedule without reservations (The odds of finding two first come, first served adjacent spaces for longer rigs was less than zero). Within tribal lands you have the choice of private campgrounds operating on tribal land ($60 per night – forget it) or tribal parks. Tracking down online information on the tribal parks isn’t easy as they don’t have their own websites or end in broken links from the tribal website. I finally found that the Chewing Blackbones Campground on Lower St. Mary’s Lake had a facebook page. Through facebook correspondence I was able to obtain a rate sheet for the campground (pictured) listing a “Basic Camping – Non Member $20.00” Asking if the $20 rate applied to RVs, the facebook administrator confirmed that is was their understanding the “basic camping rate of $20 / night applied to all types of camping, be it tents, pull trailers or RVs”. Since this was in line with what the national park charged for a basic campsite ( $23 no hookups) I decided this was a fair price and would be an okay place to stay.

Now, back to our story: Having gained permission to camp, thinking our troubles were over for the day, we were told by the campground manager it was $40 per night to camp for each RV. I pointed out that I had corresponded with their facebook administrator and had confirmed the basic camping rate of $20 per night was for RVs or tents and had the rate sheet in my truck if they wanted to see it. He didn’t want to see it told me that rate was for tents only and his boss instructed him to charge RVs an extra $20 in addition to the “basic” fee. Already frustrated and tired we paid for our spaces thinking I could straighten things out at a later date with the facebook administrator that confirmed, in writing, the $20 per night basic camping rate. The deception deepened the next day when we left the campground and spied their rates posted at the entrance to the campground (see picture). No surprise that the $20 basic camping rate was listed at the top of the sign with no mention of a $40 rate for a non-hook up RV space or any space for that matter. 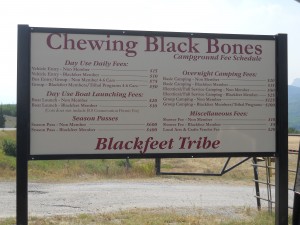 Being scalped $40 per night for a non-hookup space, one of the few unpleasant adventures in RVing!

In the next installment, we will look at my attempt to get the extra $20 refunded. Hopefully by then, I can report a positive outcome.