You are here: Home / Blog / Chewing Blackbones Campground
This post may contain affiliate links or mention our own products, please check out our disclosure policy here. 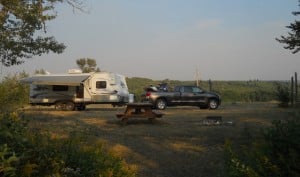 It was one of those travel days when you just fall further and further behind in what you thought would be an easy day of travel. Such was the case when we traveled between West Glacier and Lower St. Mary’s Lake, Montana with a stop for groceries and a visit to Two Medicine along the way. Not only did I not factor in sufficient time for a grocery stop and visiting / hiking in the Two Medicine area of Glacier National Park, we discovered (only when we came upon a sign with trailer in tow) that the shortest path via Hwy 49 between Two Medicine turn off and our destination has a 25 foot maximum length restriction necessitating a 28 mile detour! After making the detour via Browning, MT we then painfully learned US Hwy 89 (the signed route to St. Mary’s) between Browning and St. Mary’s didn’t live up to typical US highway standards (customary 55 mph was out of the question). It was twisty with undulating asphalt, frequent gradient changes and little to no shoulder. To add insult to injury the smoke from forest fires in the park obscured what would have certainly been stunning views as we traveled up, over and around the foothills on Hwy 89. Oh, and I almost forgot to mention the road construction detour in Browning! By the time we f-i-n-a-l-l-y neared our predetermined campground (boondocking is not allowed in Glacier National Park or the Blackfeet Reservation which borders the east side of the park) it was late afternoon, we were tired, hot (temp in the 90’s) and frustrated. As we turned into Black Chewing Bones Campground we were met by a national park ranger that asked, “are you here for the fire”? I replied, “no, we were here to camp”. At which point I was told, due to the fires in Glacier National Park the entire campground had been rented out by the federal government as a firefighting base camp. The crews and the majority of equipment had already left leaving plenty of room to camp, but the federal government’s rent didn’t run out for another three days. I (blood pressure about to boil from another setback) explained we were hot and tired from a long day on the road with no idea on where else to find a camp space (the ranger couldn’t recommend anything nearby as he was brought in from Colorado). I asked if they could stick us way out in a corner somewhere? The ranger was agreeable to this as long as the campground management was. Thankfully the campground manager was onsite and agreeable to this arrangement.

Detours, smoke, twisty roads and other travel setbacks, just another adventure in RVing!

In the next installment we will see how our joy of obtaining a campsite was quickly dashed. Stay tuned!