You are here: Home / Blog / The Hidden Gems Of Southern Indiana
This post may contain affiliate links or mention our own products, please check out our disclosure policy here.

Exploring the outdoors and learning about local history are examples of the many treasures offered in southern Indiana. The Corydon area has a lot to offer, namely the Battle of Corydon Park, which memorializes the only battle of the Civil War fought on Indiana soil. Corydon is also home to Hayswood Nature Reserve and O’Bannon Woods State Park, a 26,000-acre park that borders the Ohio River. 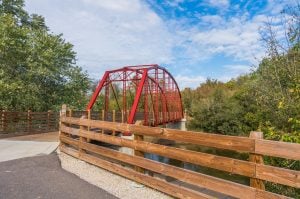 This state park also offers 281 sites, with full hook-ups and a host of other offerings. There are numerous trails for walking and hiking as well as a swimming pool and easy access to a number of attractions.

Less than 10 miles from O’Bannon Woods State Park is the incredible Indiana Caverns, a must-visit while in the area. When discovered several years ago, the caverns revealed a number of animal bones from the Pleistocene (Ice Age) period from 12,000 to 50,000 years ago!

The original course had sand ‘greens’ which would have to be smoothed out by the last player in each group before going on to the next hole. The actual greens were installed in 1957. In 1995, the course expanded to 18 holes and was renamed the Old Capital Golf Club. 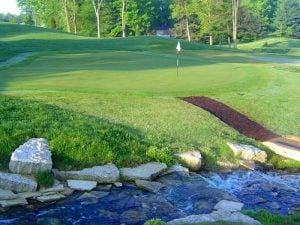 A bit of trivia lies in the re-naming of the golf course. When Indiana became the 19th state in 1816, Corydon served as the capital until 1825 when the capital was moved to Indianapolis. Thus, a nod to the past.

Today’s golf course is a par 72 that stretches to 6,732 yards. It features numerous challenging holes with a pesky creek coming into play on many of those. Elevation changes throughout also add to the course appeal.

After a round of golf, you shouldn’t leave without visiting Bill’s on the Hill, the clubhouse, restaurant, bar, and grill at Old Capital Golf Club. The BBQ pulled pork and ribeye steak sandwiches are the most popular items on the menu.

For more information on this delightful part of the country, visit this link to Corydon, Indiana.  You can also get more details on O’Bannon Woods State Park on RV LIFE Campgrounds. 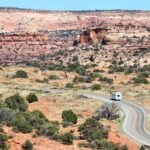 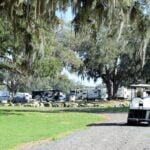