You are here: Home / New RV Products and Gear / Power Your Adventures With A CRAVE Power Bank
This post may contain affiliate links or mention our own products, please check out our disclosure policy here.

Whether you like getting outside to bike, run, ski, or just enjoy the solitude of a remote location, having your electronics available is often a modern necessity to stay connected to friends, family, or work while you are off-the-grid.

It can also become a safety concern in the event that you need to call for help but don’t have the battery life on your device to do so.  While there are other battery charger options available, the power banks by Alaska-based CRAVE are specifically designed and tested for keeping your adventures powered. 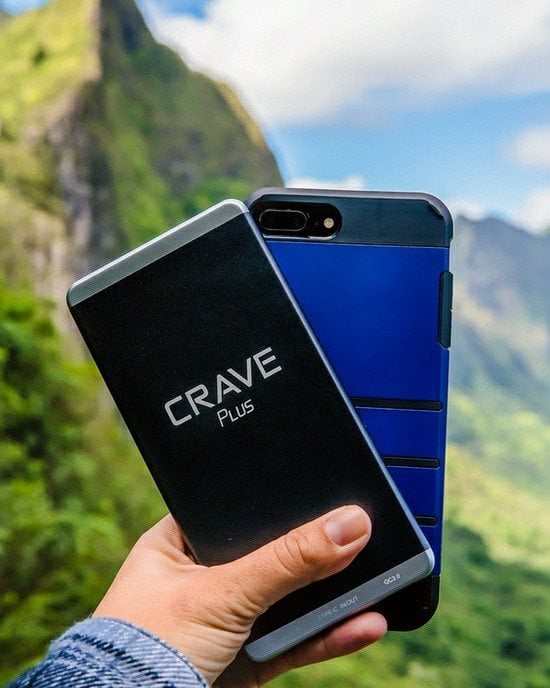 CRAVE Plus power banks are the perfect way to keep your devices powered during your RV adventures. (Photo courtesy of CRAVE)

Brothers Dmitry and Vitaly Kudryn established their CRAVE business as a way to create an American company that could not only design and create quality electronic products, but also that is easy for customers to deal with, stands behind their products, and does exactly what they say they will do for their customers.  “We stick to our values without compromise,” says Dmitry. 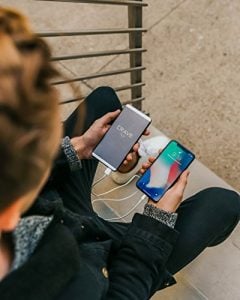 The power bank and two devices can be charged at the same time.

The two brothers worked together to develop their initial power bank idea, which sold out less than four days after being launched in 2015.  Since then, the young company has expanded to include 13 employees but remains focused on a direct-to-customer business model that allows them to keep the quality of their products high without the high sticker prices of many competitors.

All of the CRAVE products are tested by people who the company hopes to see using their products.  Their latest release launched in November 2017 is the CRAVE Plus—a 10,000 milliamp hour charge pack that has a unique slim design that is about the same size as an iPhone 8+.  The CRAVE Plus also has both USB and Type C ports to charge a multitude of devices rapidly.

You can charge the power bank and up to two devices at the same time.  The product has a pass-through charging technology which allows the power bank to be recharged as well as any other device that is plugged into it simultaneously.  This technology is valuable where charging is limited, such as in an RV, and all the devices can be charged together while the vehicle is operating.

The sturdy aluminum housing is not only durable but also lightweight.  Of their five power bank products, the CRAVE Plus is the lightest version that is also capable of fully recharging a smartphone two to three times before the power bank needs to be recharged. 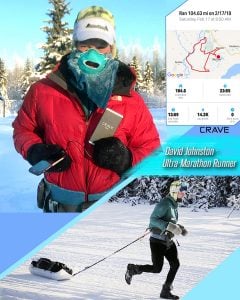 Ultra-runner David Johnston tested the CRAVE Plus power bank during the Susitna 100 race in Alaska. (Photo courtesy of CRAVE)

Running continuously for 100 miles in remote Alaska during the middle of winter—where temperatures can reach -30F—is no easy feat for even the hardiest batteries (or runners, for that matter).

But after 23 hours and 38 minutes of punishing Alaska winter later, the CRAVE Plus had allowed David to continuously map the entire run on his phone, something that he had not been able to do before.  After his testing, David was thrilled with the CRAVE Plus charger.  The CRAVE Plus was also tested by mushers during the 2018 1,000-mile Iditarod Sled Dog race.

Other CRAVE power bank chargers are available for a variety of options, including charging laptops as well as devices like tablets, phones, and cameras.  Each charger is universally compatible with all major brands of electronic devices and comes with an 18-month warranty.

Whether you are a full-time RVer or planning your next RV adventure, these power banks are a great option for those who travel and want to be untethered from the wall.