You are here: Home / Blog / Dad’s Birthday
This post may contain affiliate links or mention our own products, please check out our disclosure policy here. 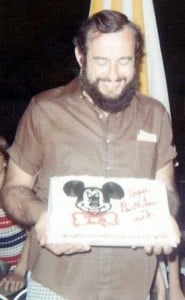 While Mom (Charlie) is on the road doing her big move from Congress, AZ, to Sequim, WA, she asked that I cover her blog for this week (mostly because of an unattached attachment, but that’s another story!). So you get my ramblings!

Today is my dad’s 80th birthday. Sadly, he did not live to see it. As you probably know from Mom’s stories, he died at age 47, which is way too young. It always amazes me how much it still hurts when I think of him and how much time we all missed with him. I can’t watch a movie where someone’s father dies without a tissue in hand. I have been watching Grey’s Anatomy from the beginning on Netflix recently (I hadn’t been watching, but got hooked when my daughter, Becca, was watching later episodes she missed while in Peru), and watching the episode where George’s father dies, I was a tearful mess. I think I used at least 3 tissues! But then, I am a crier for all sad movies, and the occasional cute/sad/happy commercial!

I like to think that Dad would be proud of me and my life. I know for a fact he would have loved and been very proud of my daughter, as am I. Did you know that she is going to get her master’s and teaching certification at Columbia University starting in January 2016? Can you tell I’m just a bit proud of my girl?

Dad in a silly hat

I know he would have enjoyed all the travels that Mom has had over the years. It was something they had planned on doing together when he retired. He used to love the many camping trips we made when I was growing up, with family and Girl Scouts. We spend a lot of time tenting and RVing. We traveled the length and breadth of Michigan, and hit most of the other states before I was out of high school. I think the only new state hit after I graduated was Alaska, and that wasn’t until 2010 on a cruise with my husband, Bill. I still haven’t been to Hawaii, but hope to one day, just to say I hit all 50 states, if not to enjoy the beautiful scenery and beaches.

Bill and I tried owning our own RV once. It was a 1972 Weekender motorhome. We bought it on eBay from a guy in southern Oregon and owned it for about 3 years. We had a ball in it, camping, soccer games, trips to Puget Sound for spring break. But as old things do, it became a liability with all the things that started to fall apart. We were able to sell it for what we paid for it, not something you can do with a vehicle very often! We do want to get one again soon, as hubby is going to retire in less than five years and we want to do some traveling. Maybe not to the extent that Mom did, but we would like to have some more adventures. Hey, we even built our garage with a tall center door just for that reason!

I think I’ve probably rambled on enough. If all goes well, Mom will be in a new home and doing this herself next week.

Qapla’ (for the non-nerds, that’s Klingon for success!)

Winter in the Wilderness, the first e-book novel published by Minshall, is offered at most Internet book sites. A print edition may be obtained from Amazon, or you can order an autographed copy from the author at 1009  W. Brackett Rd, Apt 234, Sequim, WA 98382 for $7.95 plus $3.50 for postage and handling.