You are here: Home / Blog / Darlingtonia State Natural Site Near Florence, OR
This post may contain affiliate links or mention our own products, please check out our disclosure policy here. 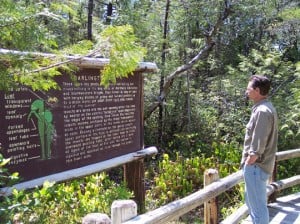 An 18-acre botanical park on the Oregon Coast is the only Oregon state park property dedicated to the protection of a single plant species. And it just so happens that this plant is carnivorous. Darlingtonia californica, also known as the cobra lily, is a member of the pitcher plant family. For a close-up view of this strangely-shaped plant, stroll along the short boardwalk at Darlingtonia State Natural Site. Purchased from various owners between 1946 and 1964, this tract is primarily a bog, but the raised walkway keeps your feet dry. This botanical rarity blooms in May or June with flowers of yellow and red and produce up to a dozen leaves per plant. Erect seed pods remain most of the summer.

Darlingtonia looks weird enough to humans, but it’s a real garden of multi-colored horrors for bugs. 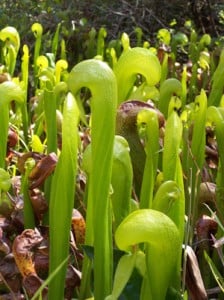 Nectar inside the tube-shaped plant attracts insects. Once inside, an insect becomes confused how to get out and keeping a foothold on the glassy smooth upper surface of the tube is difficult. It’s all “downhill” for the insect from that point. Eventually the fly or gnat drops into the lower part of the tube, is trapped by downward-pointed hairs, and falls into a pool of water at the bottom of the stalk. Bacteria in the water decompose the bug into nitrogen that is then absorbed by the plant. 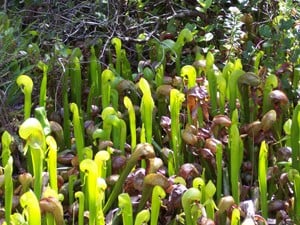 Darlingtonia are only found in serpentine soils and sphagnum fens arising from wet sands on coastal plains— primarily southwestern Oregon and northern California. But even if your backyard at home has these same soil conditions, take only photos as a souvenir, because collecting Darlingtonia samples is illegal in Oregon. In addition to the boardwalk, you’ll find restrooms, picnic tables, and plenty of parking.